At Pentagon, a tribute to the wounded 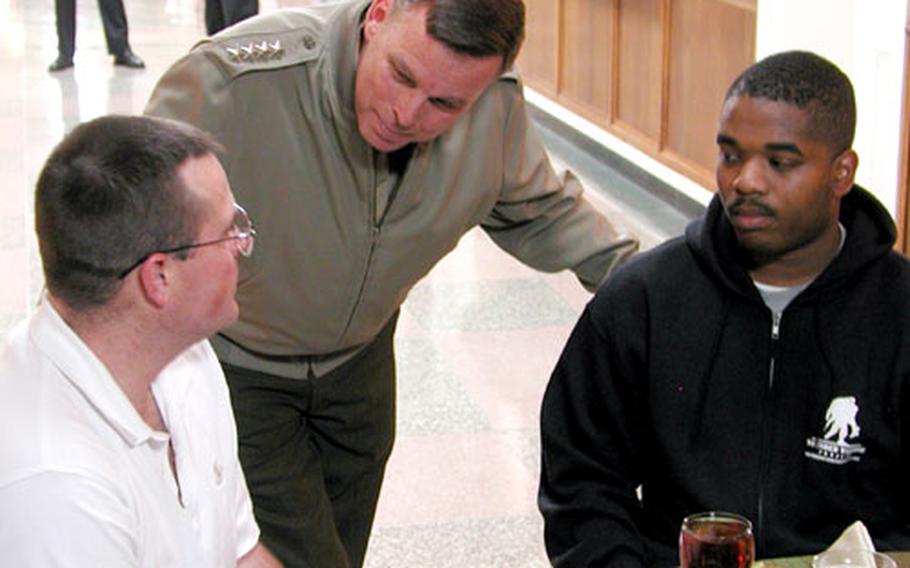 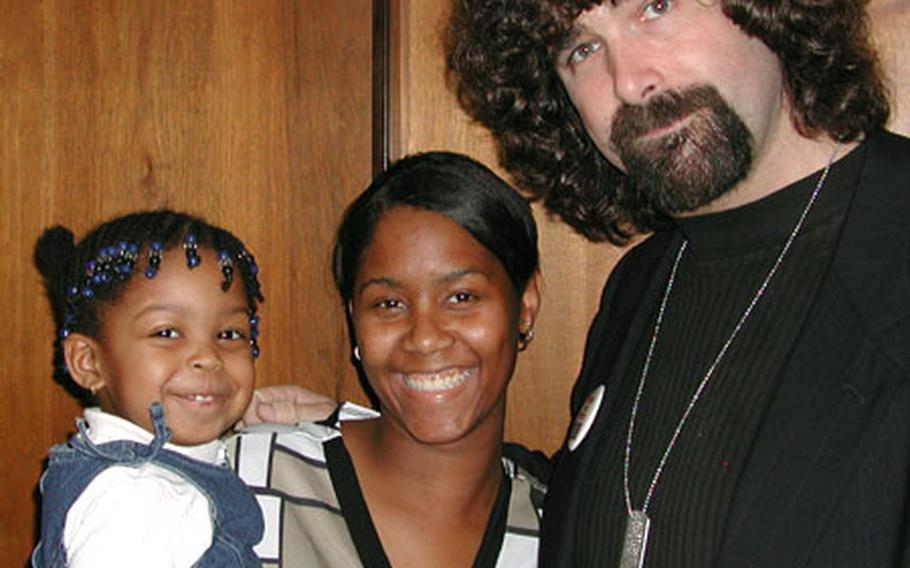 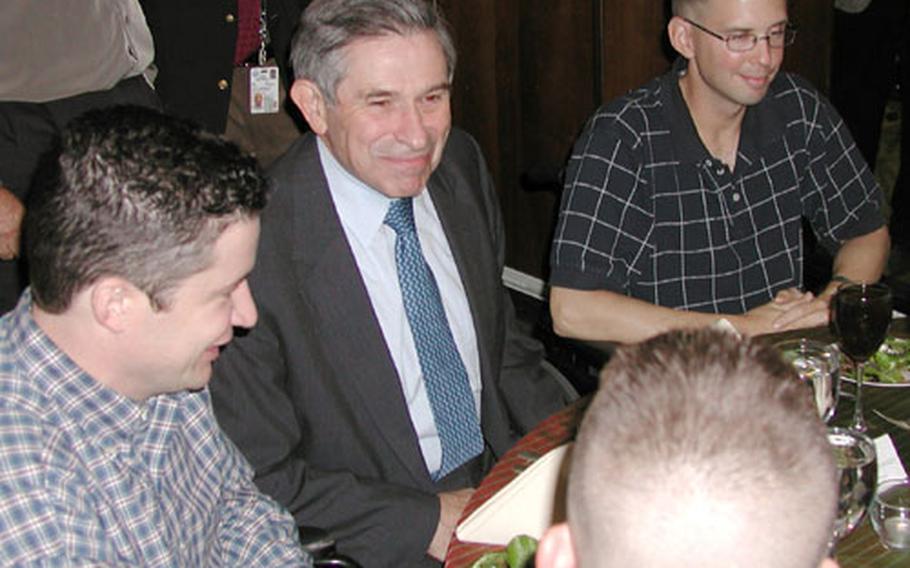 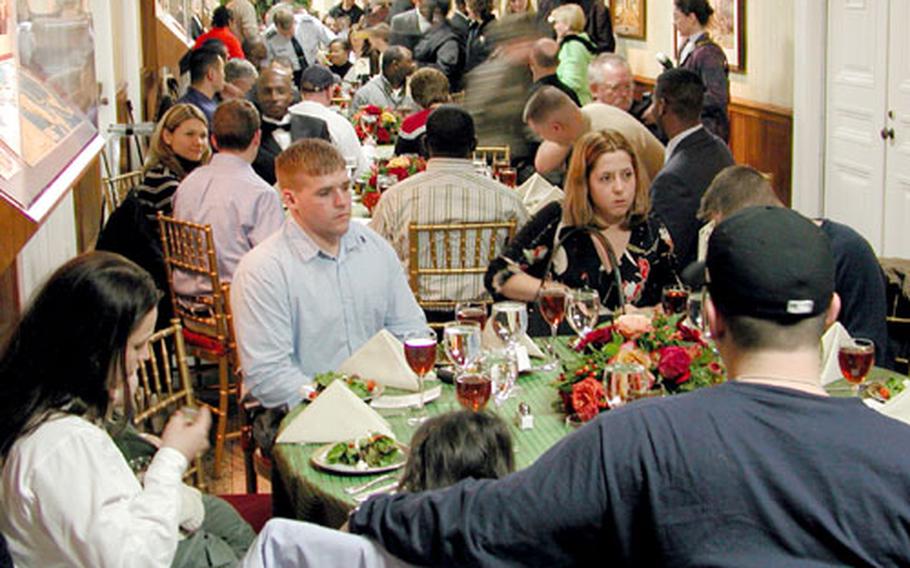 Wounded servicemembers, their families and other guests gather at the Pentagon for dinner Thursday night. (Joe Gromelski / ©S&S) 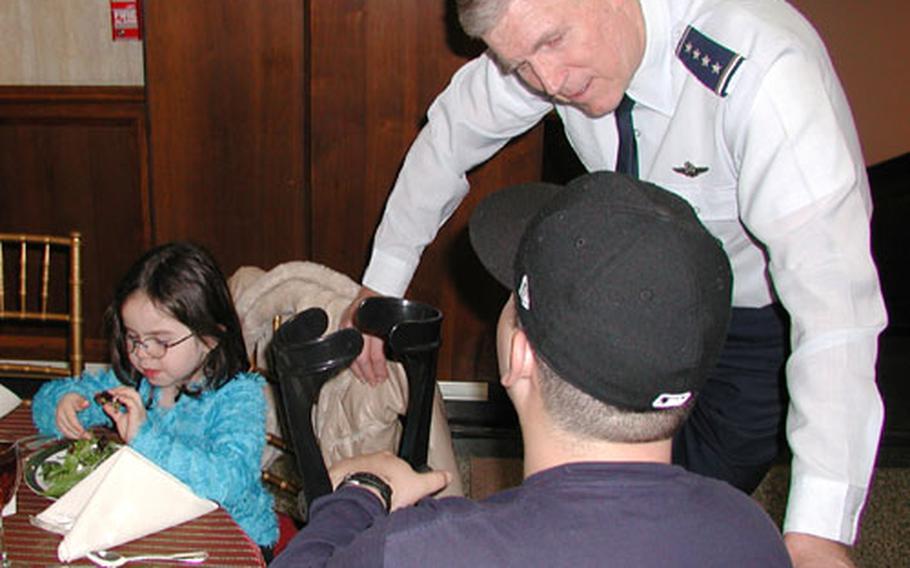 Gen. Richard Myers, chairman of the Joint Chiefs of Staff, talks with Army Cpl. Roberto Santiago of the 1st Armored Division, 1st Brigade, based at Friedberg, Germany. Santiago and his family, including 5-year-old daughter Mariah at left, were among those honored with a dinner at the Pentagon Thursday evening. (Joe Gromelski / ©S&S)

The two sized up each other&#8217;s injuries and gingerly shook hands.

McLin, of the National Guard&#8217;s 2101 Transportation Company 3rd Platoon out of Aliceville, Alabama and Shelmerdine, of the Army Reserve&#8217;s 369th Transportation Company, based in Wichita, Kansas, were two of 170 guests from Walter Reed Army Medical Center in Washington and the National Naval Medical Center in Bethesda, Md., honored Thursday evening with a dinner for those injured in the global war on terror.

The troops were welcomed by Deputy Secretary of Defense Paul Wolfowitz, Mrs. Donald Rumsfeld and a host of general officers and their wives. Defense Secretary Rumsfeld could not attend because he was flying back from his visit with troops in Kuwait, among other places.

Wolfowitz told those gathered about troops fighting in the Battle of the Bulge, the seemingly insurmountable odds against them and the casualties they suffered.

&#8220;You&#8217;ve probably heard all the accolades,&#8221; Wolfowitz said. &#8220;They&#8217;re called the Greatest Generation, and deserve to be called that. But you here, and the men and women in uniform on the front lines in Afghanistan and Iraq, are every bit as brave and courageous and dedicated to this country.&#8221;

One of the highlights of the evening was World Wrestling Entertainment superstar Mick Foley, aka Mankind, who ate with the troops and agreed to countless requests from servicemembers and families for a photo.

Foley, who regularly visits the wounded, spoke before the meal about his work with the Defense Department&#8217;s America Supports You program and how humbling his visits have been.

The America Supports You program provides an easy way of letting the servicemembers know the folks at home are behind them.

But the stars of the evening, as all the speakers said, were the troops.

As they mingled and talked about their experiences, they wanted their compatriots still in the fight to know they are OK, and to be safe.

Cpl. Roberto Santiago of the 1st Brigade, 1st Armored Division, based at Friedberg, Germany, talking about his friends Spcs. DeCamps and Gregory, perhaps summed up the experience of camaraderie in war best.

Santiago was badly injured in May when he took shrapnel from an RPG in the spine in Karbala. He walks with crutches now, but says the prognosis is good for him to walk unaided soon.

Now that he&#8217;s recovering, he has a different support team.

McLin, injured when an improvised explosive device was set off as his convoy passed, wanted his friends in the 3rd Platoon to know he was thinking of them.

He was looking forward to 30 days&#8217; leave for Christmas at home in Tuscaloosa, Ala.