At Osan, airmen who might deploy to hot spots learn survival tips 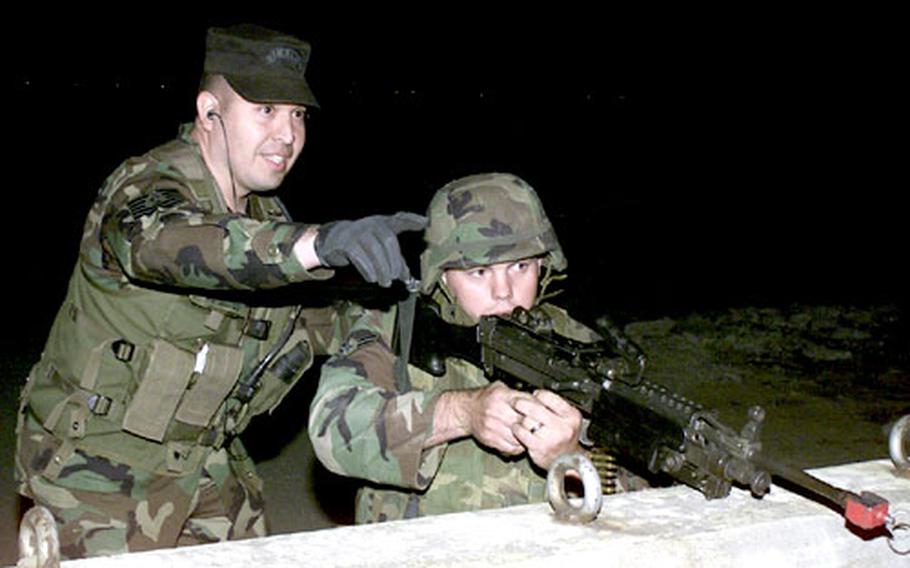 OSAN AIR BASE, South Korea &#8212; Pacific Air Forces has set up a special training program here to better prepare base defense troops and certain other airmen who may later deploy to world trouble spots.

The new five-day program, called Just In Time Training, held its first course April 12-17 for 63 airmen from bases around the Pacific &#8212; most expecting to be assigned next to units subject to being deployed.

The trainers drew on information including &#8220;lessons learned&#8221; reports and other data from the conflicts in Iraq and Afghanistan, Perez said.

The program covered everything from a detailed profile of various countries to which airmen might deploy, to roadside bombs, convoy security, rules of engagement, vehicle searches and close-quarters battle techniques. The course backs up classroom instruction with realistic live-fire night combat training, some of it using night-vision goggles.

The flight designed the course material after PACAF assigned it in February to set up the course. Part of the flight&#8217;s mission is to provide training of various kinds to airmen throughout the PACAF command.

The airmen mainly were from Security Forces, the Air Force branch with chief responsibility for defending air bases. Also in the class were members of Osan&#8217;s 554th Red Horse Squadron. Red Horse units build airfields and do other construction for the Air Force, comparable to the Navy&#8217;s Seabees.

The Red Horse troops were from Osan Air Base, however, because airmen stationed here, 48 miles south of Korea&#8217;s Demilitarized Zone, are considered already forward-deployed. The 51st Fighter Wing, based here, is the most forward-based permanent wing in the Air Force.

The next class has yet to be scheduled but Lt. Rhasaan Smith, Logistics Flight commander with the 554th Red Horse Squadron, said the training already has benefited him &#8220;immensely.&#8221;