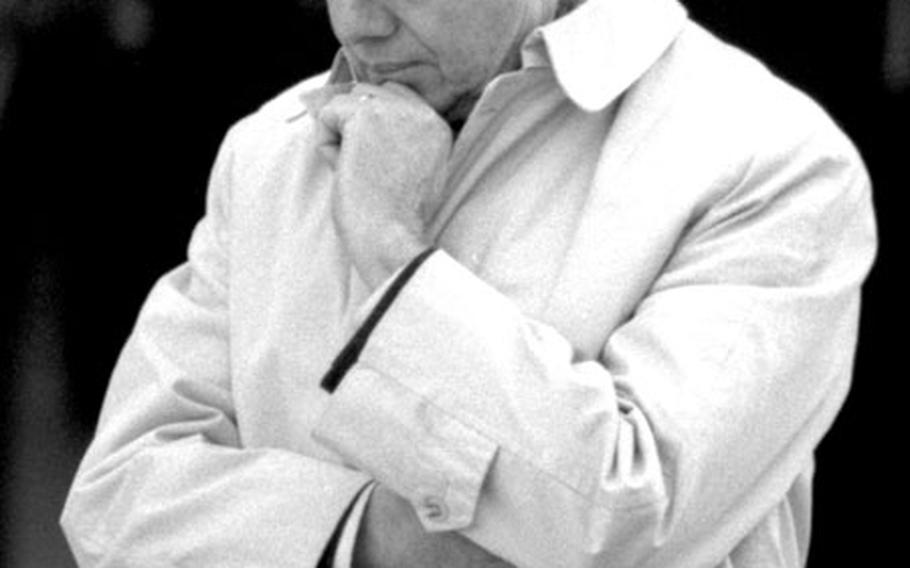 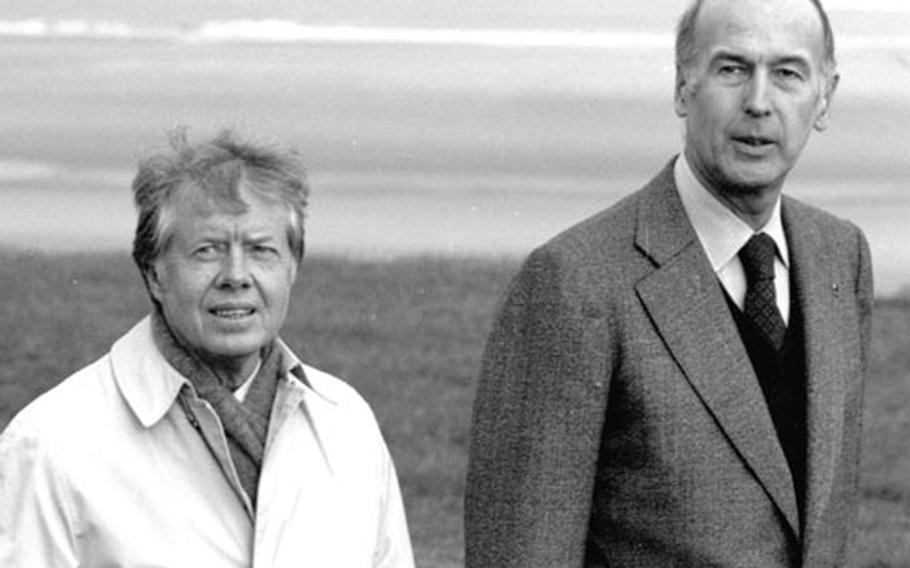 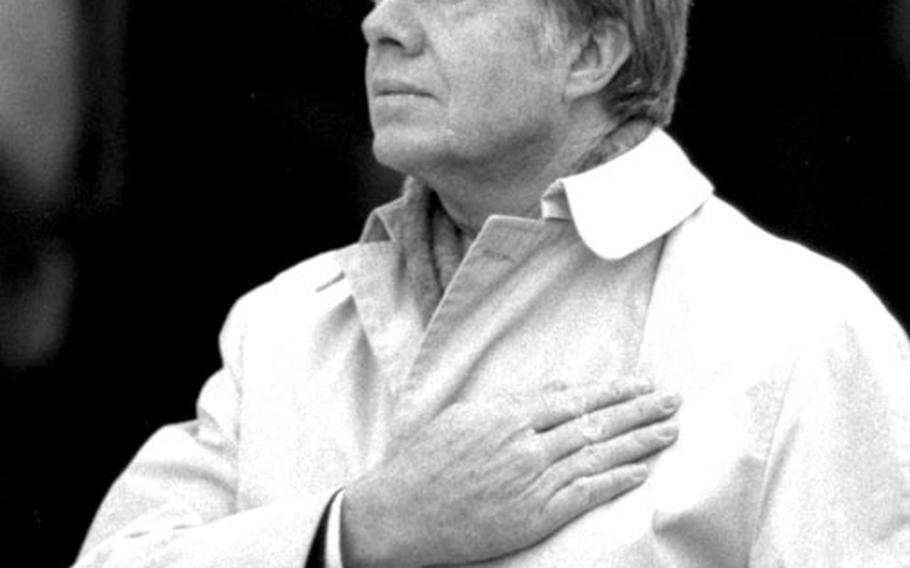 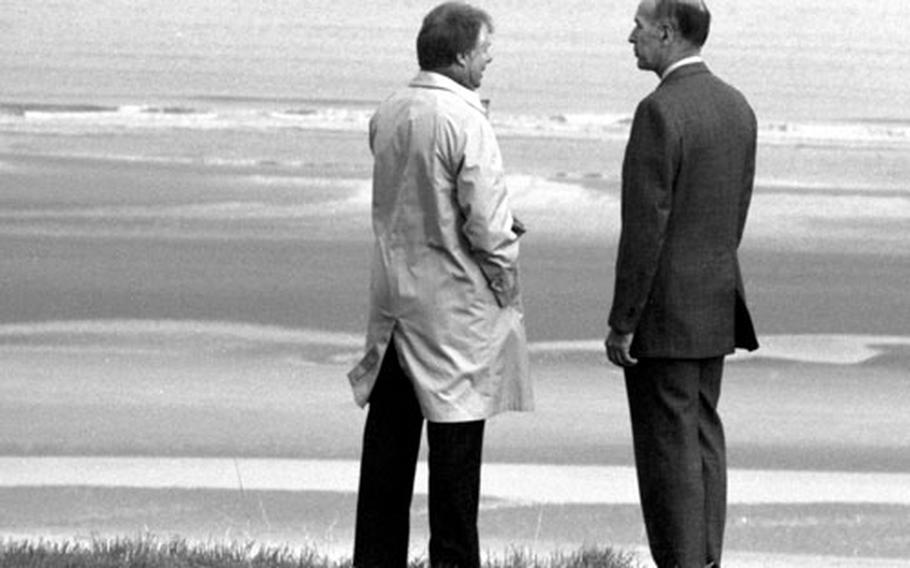 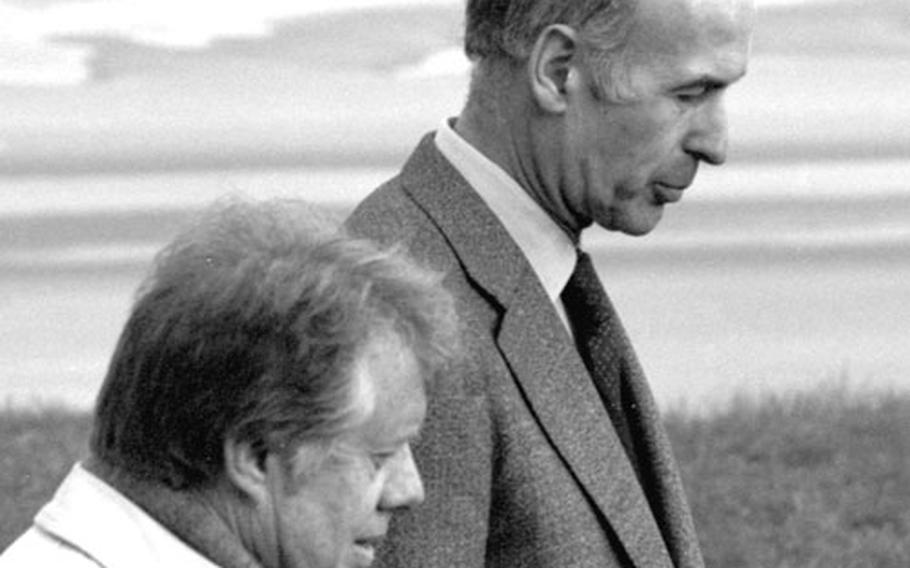 In a 20-minute ceremony punctuated by three rifle volleys fired over the English Channel, President Carter and French President Valery Giscard d'Estaing laid wreaths before a 22-foot-high bronze memorial to the spirit of American youth.

In his remarks at the Normandy American cemetery, Carter recalled the morning of June 6, 1944, when more than 5,000 ships, 3,000 planes and 176,000 troops joined in the greatest amphibious assault history had known.

Carter noted the U.S. 29th and 1st Inf Divisions landed on the sand of Omaha Beach below the 172-acre cemetery and that out of 25,000 who ploughed through the waves to shore 2,000 died.

"We are determined with our noble allies here that Europe's freedom will never again be endangered," Carter said. " We now have about 200,000 Americans, fighting men, in Europe to make sure that this threat is never before us again."

Gazing out over row on row of white limestone grave markers, he added, "And it is a great honor for me, as president of the United States, to come here to pay homage to the brave men and women of the past who have insured our precious freedom today."

"All this France remembers," Giscard said. "She expresses her gratitude to those who fell for her freedom, to their families and all their friends."

Carter arrived by helicopter shortly after 11 a.m. He strode with Giscard to the memorial to honors played by a French military band.

The two chief executives observed a moment of silence after placing the wreaths. Then came four muffled ruffles and the crystal-clear notes of taps. After his remarks, Carter gazed out the rear of. the memorial at the garden dedicated to the 1,557 missing in action remembered there. Then he turned to the sea for an orientation by Arm:: Brig. Gen. John W. Donaldson, officer iii charge of the European Office of the American Battle Monuments Commission.

A 24-man honor guard, eight-man firing squad and four-man color guard were sent from G&ouml;ppingen, Germany by the 1st Inf Div, which before sunset of D-Day, took the high ground on which the cemetery stands.

Carter's visit, the first by an incumbent American president to a U.S. cemetery in Europe since 1919, came on the next to last day of his nine-day, six-nation tour.

Sometimes the Carter entourage looked like a second invasion of this region, famed for its butter and cheese. The presidential party's eight buses and six limousines wound their way from the cemetery to the provincial center of Bayeux, between arms and stores and hedgerows and stone mansions.

Fences had sprouted U.S. and French flags; windows and walls boasted waving children as Normans turned out &mdash; three deep in places &mdash; at dozens of intersections along the 10-mile route.

In Bayeux, capital of Free France for a short time after D-Day, Carter was greeted by the strains of "Anchors Aweigh" and "Oh, Susanna."

In brief remarks, Carter cited the long historical ties between the U.S. and France.

Carter returned to Paris later Thursday, and in the evening was feted in regal splendor at the Chateau de Versailles.

The only concession to Carter's "down-home" style was the male attire &mdash; dark suits instead of black tie.

But for the women, including Mrs. Carter, all the stops were pulled out for the glamour of the occasion.

To satisfy the "populist" will of Carter and himself, the French president invited some 3.500 guests, including a cross-section of French society and Carter's traveling entourage of officials and press representatives, to a post-dinner reception in the chateau.

For the occasion, Giscard opened all of the grand salons of the 17th century Versailles palace for the thousands of guests. The two presidents moved from one magnificent salon to another, Carter meeting many of the people in the crowd.

Before flying back to Washington Friday, Carter planned to visit NATO headquarters in Brussels.