At Navy Ball, Iwakuni rolls out the red carpet for 'Survivor' contestant Boesch 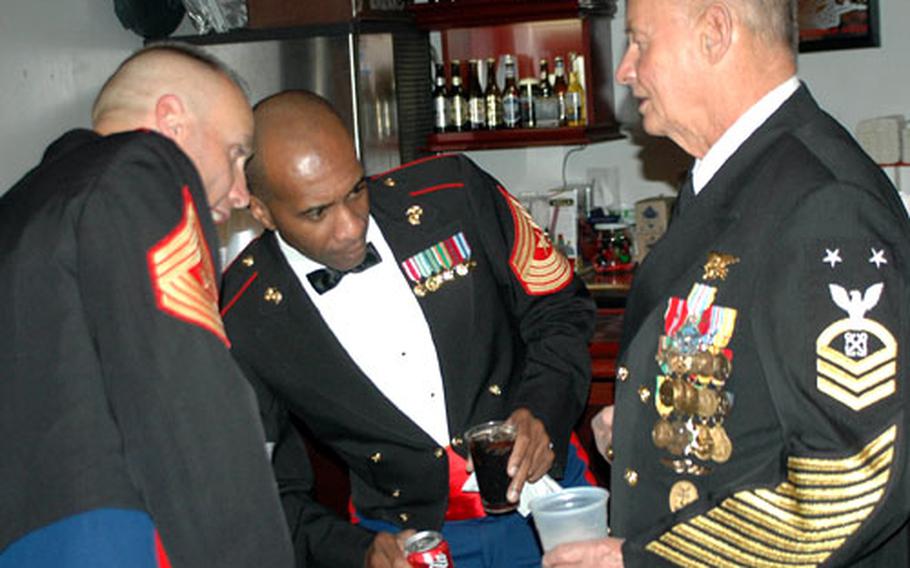 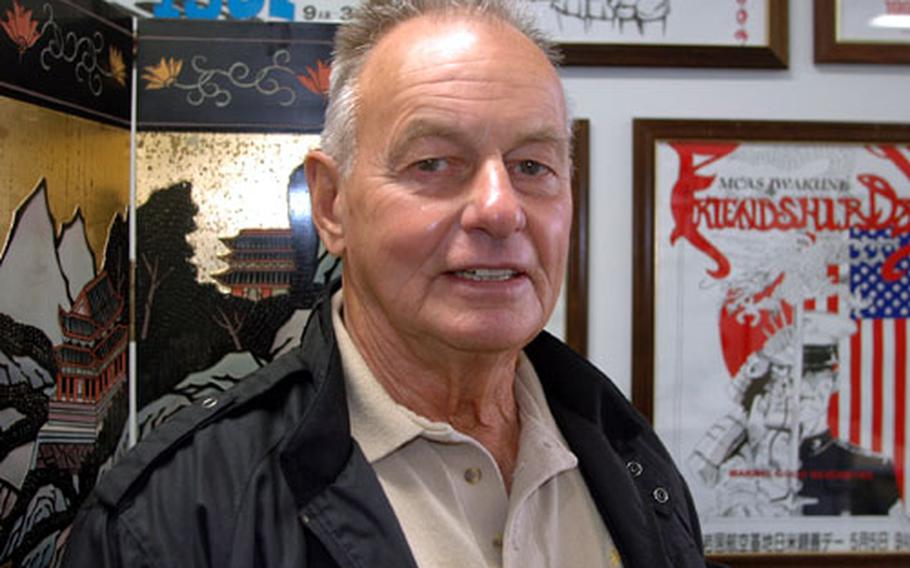 IWAKUNI MARINE CORPS AIR STATION, Japan &#8212; If organizers of the Navy Ball here Friday night wanted a guest speaker who is an old salt of a sailor, crusty to the core and rooted in Navy traditions from several decades back, they certainly had the right man in mind when they invited retired Master Chief Petty Officer Rudy Boesch.

Boesch, 76, fits that description to near perfection. Add a dash or two of sarcastic humor, a basic nitty-gritty life philosophy and a certain amount of fame from being a competitor in the first season of &#8220;Survivor,&#8221; and you have something akin to an aged overachiever.

Iwakuni&#8217;s population of about 5,500 servicemembers, civilian employees, their spouses and dependents include almost 300 people associated with the U.S. Navy. The 2004 Navy Ball, a celebration of the sea service&#8217;s 229th commissioning, was a formal affair held at Club Iwakuni with the Navy men and women in dress blues and civilians in black-tie attire.

The big Navy birthday party also featured Brig. Gen. Frank A. Panter Jr., commanding general of Okinawa&#8217;s 3rd Force Service Support Group, as a guest speaker. He, too, has been around the military a long time, beginning with his enlistment in 1968 and including a tour in Vietnam with the 1st Marine Division.

On Thursday, Boesch talked with Stars and Stripes, touching on his military career and offering a few insights into his stint on the popular television show.

He is extremely proud of his military service, which began in 1945 when he enlisted at age 17. Boesch immediately volunteered for &#8220;secret and hazardous duty&#8221; with the Amphibious Scouts and Raiders, highly classified naval commando units.

&#8220;Then, about as soon as I entered,&#8221; he said, &#8220;the war ended in the Pacific. In different parts of southeastern Asia, our guys were coming home by the thousands. Our small unit went in and destroyed camps left behind, and kept an eye on other equipment that could not fall into the wrong hands.&#8221;

Six years later, he completed Underwater Demolition Teams training, or UDT, at the Naval Amphibious Base Little Creek in Norfolk, Va., and was assigned to UDT-21, with which he served 11 years. Boesch completed numerous specialized schools and deployed routinely while in UDT to the Mediterranean and Caribbean areas with Naval Amphibious Forces, he said, and became a proficient combat swimmer and expert in small-boat operations.

In 1962, he was one of 50 hand-selected servicemembers of the original Sea-Air-Land Team TWO, or SEALs, becoming one of their most experienced members. In the late 1980s, Boesch became the Naval Special Warfare Community &#8220;Bull Frog,&#8221; a title bestowed to the SEAL serving the longest time on active duty.

He retired from the Navy with an honorable discharge in 1990 after more than 45 years of continuous active duty.

Boesch eventually developed a friendship with first-season winner Richard Hatch, who is gay.

As the contest progressed, Hatch was declared the winner. Boesch was third.

Compared with his rugged appearance on &#8220;Survivor,&#8221; Boesch was quite a different-looking character in his dress blue uniform at the Navy Ball.

His left sleeve had more hash marks than most uniform shops have in their store inventory, with so many ribbons and medals on the left side of his dress jacket, it&#8217;s a marvel he didn&#8217;t walk leaning just a little to the left.

His &#8220;guest speaker&#8221; plan was simple: an interactive question-and-answer session about his military career as well as behind-the-scenes tidbits pertaining to &#8220;Survivor.&#8221;

He enjoyed a few cold beers while chatting with several Marine sergeant majors, seemingly drawn to spend a few moments with Boesch, the retired command master chief, or &#8220;Rudy,&#8221; the television character known to say exactly what&#8217;s on his mind.