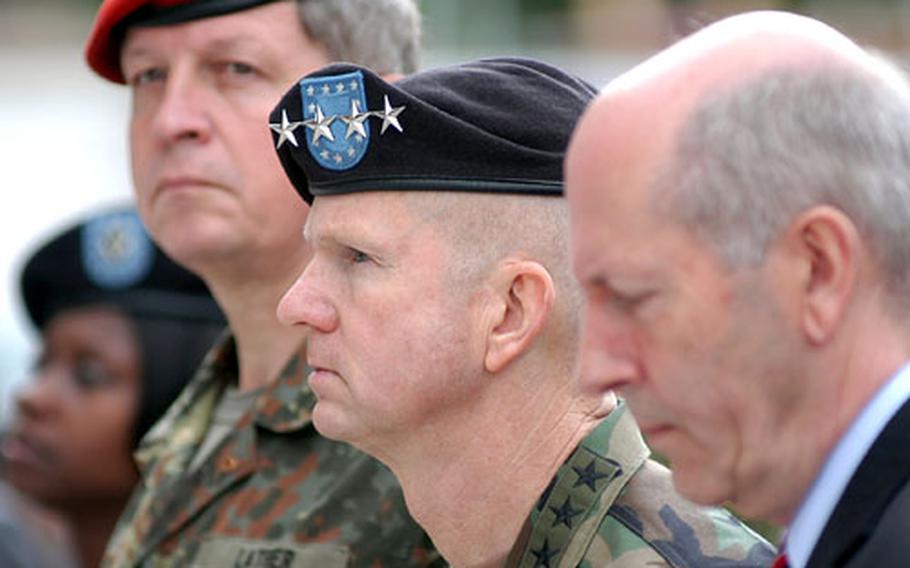 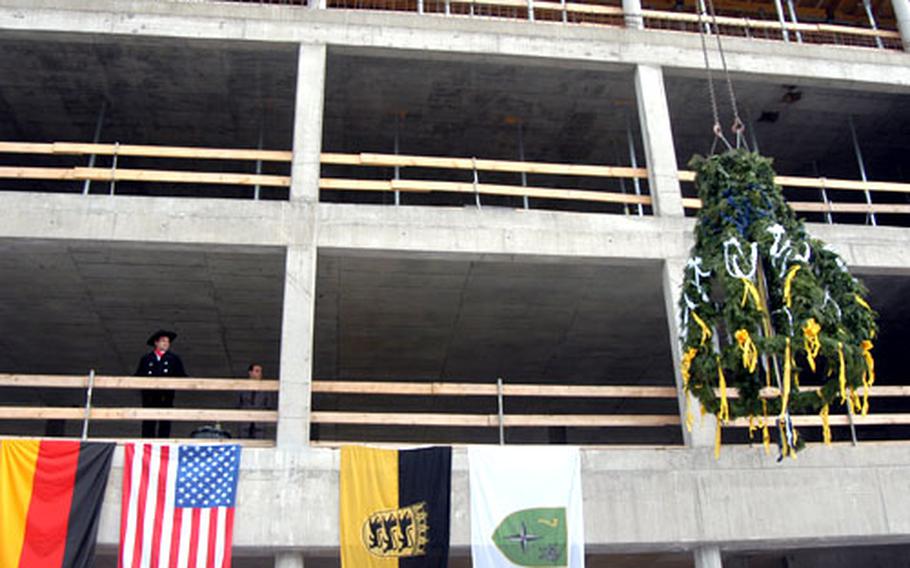 Eric Beuthen, the head craftsman at the construction site for the new Allied Land Component Command headquarters building in Heidelberg, watches a crown of pine branches being lifted to the top of the building, signifying the completion of the outer structure. (Michael Abrams / S&S)

HEIDELBERG, Germany &#8212; At a ceremony Friday celebrating the building of a new NATO headquarters, German government officials sympathized with Londoners attacked by terrorists &#8212; and professed hope that the U.S. military would not remove much of its force from Germany as planned.

&#8220;We hope that they stay, and on the other side, we know the world has changed in the last 15 years,&#8221; said Gerhard Stratthaus, treasury secretary of Baden-W&#252;rttemberg state, in which Heidelberg is located.

The ceremony at Campbell Barracks for the new NATO Allied Land Component Command Headquarters, to be completed in 2006, was held next to the concrete, four-story skeleton of the building.

&#8220;Terror is right among us,&#8221; Klaus-Gunther Biederbick, German Defense Ministry undersecretary, said at the ceremony, noting previous terrorist attacks in the United States, Turkey and Spain &#8212; all NATO countries.

Biederbick expressed &#8220;solidarity and sympathy&#8221; with the victims.

&#8220;Together, with our partners, we must do everything possible to defeat international terrorism,&#8221; he said.

The alliance has contributed some 6,800 troops to Afghanistan, where it works on reconstruction projects, and plans to send another 2,000 troops to assist in upcoming elections there. Also some 200 NATO troops are helping train Iraqis for senior Defense Ministry jobs.

Renovations to other NATO buildings will cost another $18 million.

The new buildings are an indicator that even if USAREUR leaves Heidelberg for Wiesbaden &#8212; as current plans call for &#8212; the NATO headquarters, one of two dealing with land forces, will remain.

Stratthaus said the money spent on the NATO buildings showed the importance that his region placed on NATO and U.S. forces.

Some 900 German civilian jobs in the Heidelberg area, along with retailers and restaurateurs dependent on American business, are in jeopardy if U.S. Army Europe transformation plans become a reality, he said.