At Misawa, algebra and dog biscuits 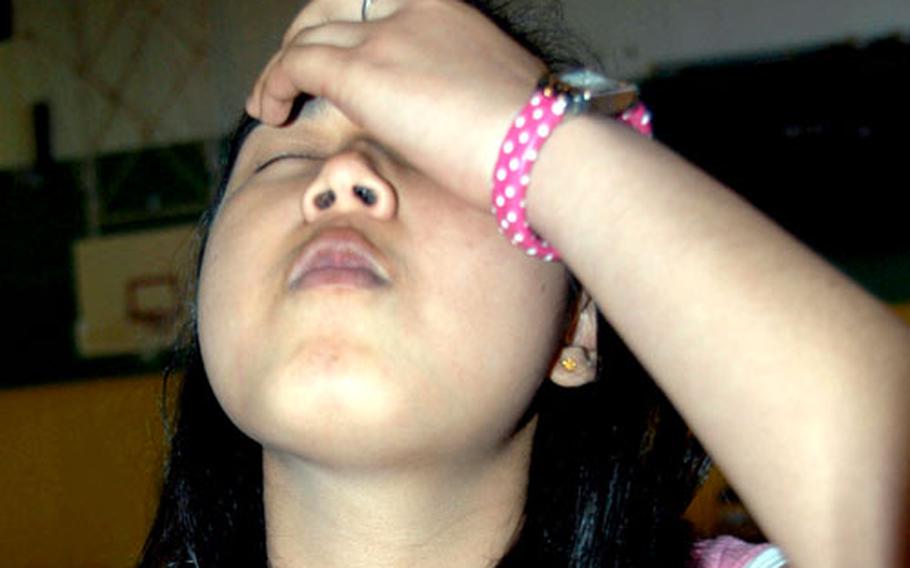 A three-legged race was one of the challenges during the Algebra Olympics. Awaiting Kenneth Radford, left, and Anthony Grizzard at the other end of the gym was a “Fear Factor” concoction. (Jennifer H. Svan / S&S) Eating green Jell-O sprinkled with tiny shellfish (crunch!) or a dog biscuit smelling like bacon and tasting like soggy steak.

Welcome to the Algebra Olympics, where math for 100 of Edgren&#8217;s Algebra I students Thursday was never so fun &#8212; or sickening.

Misawa was the fifth school among Department of Defense Dependent Schools in the Pacific to host the event this spring, said DODDS Pacific algebra coach Scott Milanovich, one of the organizers.

That test debuts in another year, so Algebra Olympics likely will be back, Milanovich said.

This year&#8217;s games were a practice run, he said, a fun way for both teachers and students to review materials from DODDS&#8217; new algebra textbook and curriculum guide, part of the school system&#8217;s revised math standards.

Most activities involved pencil and paper. Food entered the equation after linear regression: Teams matched up a table of figures, hopped across the gym in a three-legged race and tried to stomach the crunchy slime and doggy dinner.

Points were earned for a successful task &#8212; students even flashed their clean, albeit green, tongues. Plenty of garbage cans, even a nurse, were on hand. Prizes such as movie passes and gift certificates went to teams with the highest scores.

Most pupils weren&#8217;t fazed by the math: Graphing, word problems, quadratic equations, no sweat, they said.