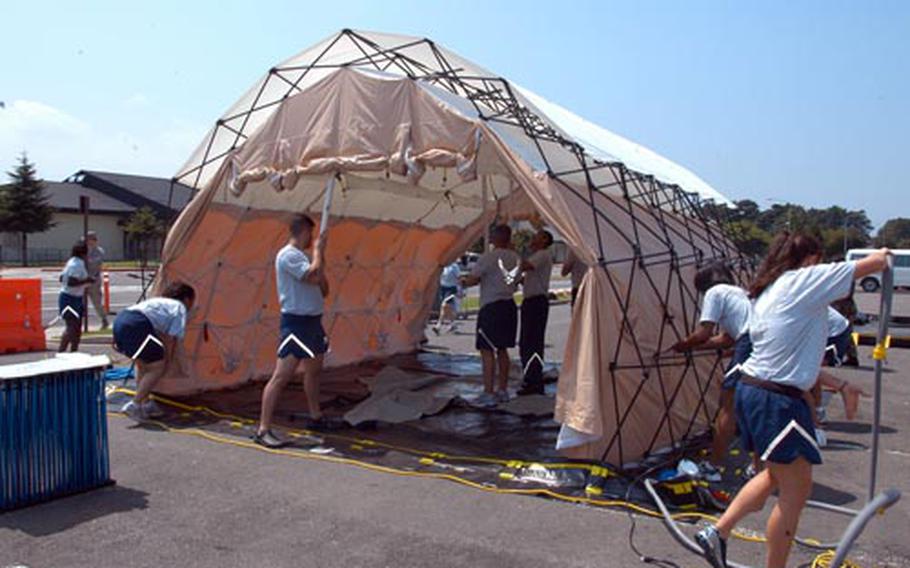 Airmen with the 35th Medical Group work quickly to erect a decontamination shelter at Misawa Air Base, Japan, on Thursday. The portable kits, being used Air Force-wide, are used to rid patients of hazardous chemicals before they are admitted to a hospital. (Jennifer H. Svan / S&S)

Airmen with the 35th Medical Group work quickly to erect a decontamination shelter at Misawa Air Base, Japan, on Thursday. The portable kits, being used Air Force-wide, are used to rid patients of hazardous chemicals before they are admitted to a hospital. (Jennifer H. Svan / S&S) 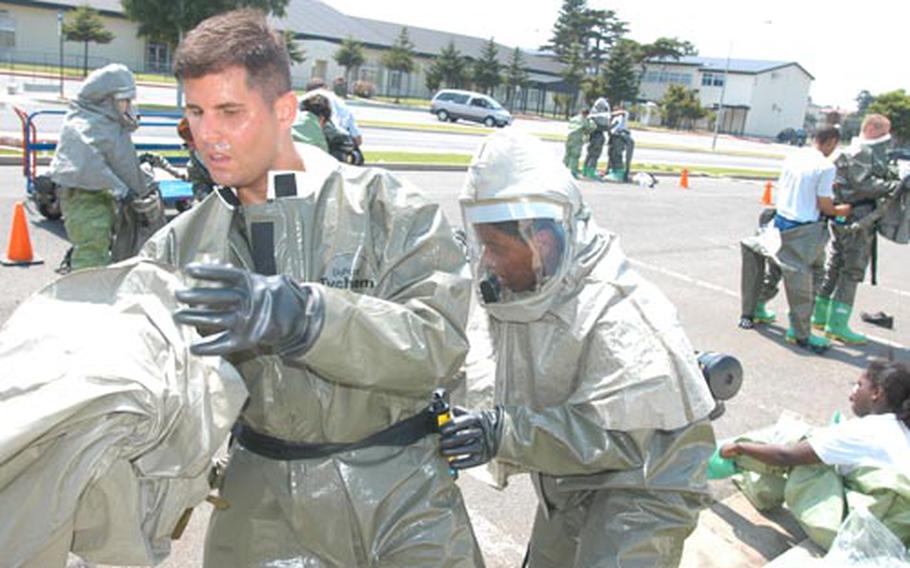 MISAWA AIR BASE, Japan &#8212; With sweat beads dripping under their masks, there was obvious incentive to act fast.

The quicker the airmen moved, the sooner they could peel off the impermeable suits that &#8212; in the heat of the day Thursday &#8212; felt hotter than chemical protective gear.

But losing the spacesuit-like outfits wasn&#8217;t the only motivation for being quick on their feet.

Setting up the decontamination shelter and scrubbing down the mannequins, if done right, could save lives in a real-life situation, airmen said.

"We&#8217;re responsible for keeping everyone inside (the hospital) from getting contaminated," said Tech. Sgt. Sarah Ortega-Russell, Urgent Care Center flight chief. "If one person gets through us, we contaminate the facility and we have to shut down &#8230; we&#8217;re no longer capable of saving patients."

And so, on Thursday morning, as the temperature steadily climbed above 80 degrees Fahrenheit, 35th Medical Group staffers donned the suits, erecting and taking down the tent-like shelter three times. By the last round, they had the shelter up and ready to receive patients in just over 13 minutes &#8212; well under the goal of 20 minutes.

"The first time, everyone was running in circles," Alfonso said. "It really depends on teamwork, everyone working as a unit."

"We did great," Ortega-Russell said.

The $124,000 decontamination kit that took center stage behind the base hospital was recently purchased by the Air Force, according to Brent C. Fenton, a military affairs instructor with the product&#8217;s designer and manufacturer, TVI Corp. in Glendale, Md.

The Air Force has purchased the kit for many of its stateside and overseas bases to replace older units from a different company, according to Fenton. The new one has improved safety features, is collapsible and lightweight, and can be set up in under eight minutes, according to the Air Force.

Fenton trained Misawa&#8217;s 35th Medical Group on how to use and repair the shelter. Trainers have already been to Yokota Air Base near Tokyo and will visit Kunsan Air Base in South Korea next month, he said.

The shelter is used to clean people possibly contaminated with chemical, biological or radiological agents. Charcoal strips and soap and water do the trick for most substances, Fenton said. Patients must strip off their clothes; those who can walk through the shelter can wash off behind a curtain.

Similar decontamination shelters have been used at bases before, he noted. In 2004, explosive ordnance disposal airmen responding to the finding of a World War I-era projectile near Dover Air Force Base, Del., were exposed to mustard gas, a blistering agent.

"You just never know when it can happen," Fenton said. "An industrial truck could spill," or someone could release a chemical in the BX, for example.