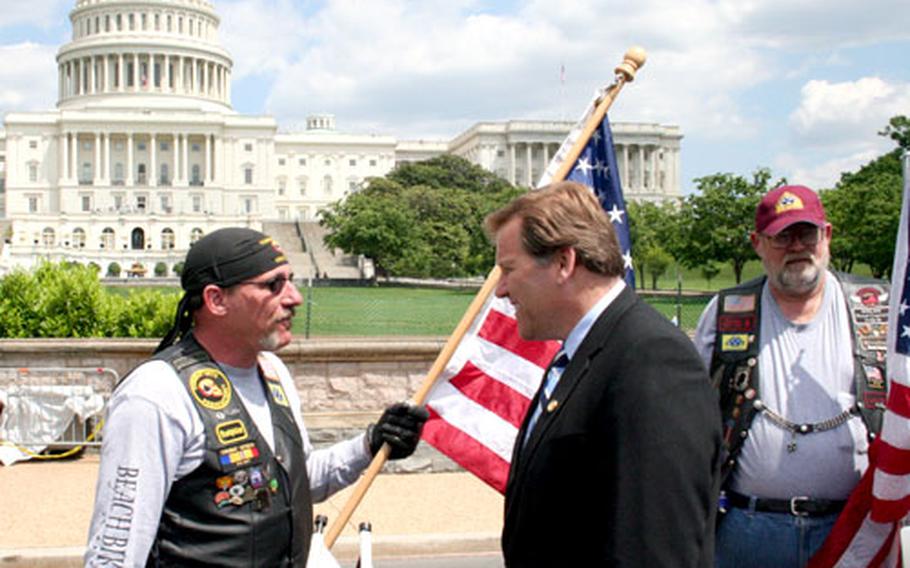 Woody “RustPicker” Wagner, a district captain for the Patriot Guard Rider’s Virginia Chapter, speaks with Rep. Mike Rogers, R-Mich., outside the Capitol during a rally Tuesday. The group provides a friendly escort in response to protests at some military funerals. Wagner’s son recently returned from his second tour in Iraq with the 3rd Infantry Division. (Leo Shane III / S&S)

WASHINGTON &#8212; When Staff Sgt. Dale Kelly is laid to rest in Maine later this month, he&#8217;ll have an escort of flag-draped motorcycles with engines roaring.

The honor guard will be in Wisconsin, just days before, for the funeral of Sgt. Nathan J. Vacho. And at Chief Warrant Officer Christopher Donaldson&#8217;s service in Nevada. And at the burial of Staff Sgt. Gregory Wagner in South Dakota too.

The Patriot Guard Riders &#8212; a loose association of more than 30,000 patriotic bikers across the country &#8212; has been providing a rolling salute to servicemembers killed in Iraq and Afghanistan for nearly a year, with convoys as long as 200 motorcycles at some memorials.

The group was founded by the American Legion Riders chapter 136 in Kansas, which organized a motorcycle counterprotest at a rally by the Westboro Baptist Church outside the funeral of a soldier killed in an ambush in Afghanistan.

Incensed by the anti-military and anti-homosexual rhetoric of the group, the riders provided the soldier&#8217;s family members with a noisy barrier between their grieving and the protestors&#8217; signs. The project grew from there as more riders looked for ways to show their thanks for servicemembers&#8217; sacrifice.

Army reservist Lance Obcamp said he has been traveling with various chapters of the riders for several months, after he saw news reports about the Westboro followers at a Maryland funeral.

Baranyai said before each ride everyone is reminded that the goal is to pay respect, not square off against protesters.

Ginger Byron has been riding her bike from southern Maryland to funerals throughout the region for several months, accompanied by her husband, David. She said she&#8217;ll continue even after last week, when he was deployed with the Air Force Reserve to Afghanistan for a year.

The Guard received congressional recognition last week, before members of the House voted on a bill to limit protests at federal cemeteries to 500 feet away and an hour before or after services.

The protest limits passed 408-3. House officials hope to have that measure approved by the Senate and ready for the president&#8217;s signature by Memorial Day.

Meanwhile, the riders have about a dozen &#8220;missions&#8221; across the country between then and now, with a number of others they&#8217;ll be ready for if families request their presence.