At last, holiday of peace in Bosnia 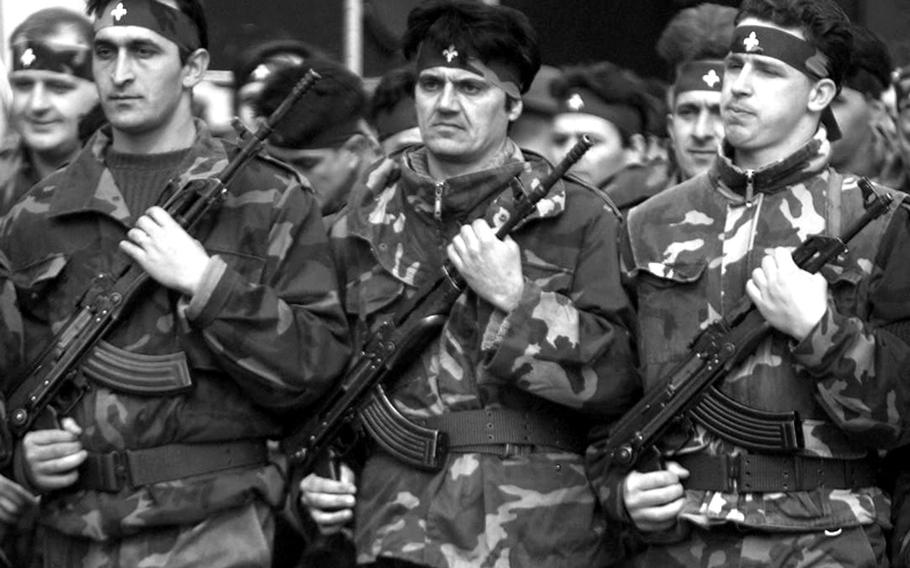 Members of the Bosnian army march through Tuzla's stadium during Independence Day ceremonies on March 1, 1996. (Michael Abrams/Stars and Stripes)

Members of the Bosnian army march through Tuzla's stadium during Independence Day ceremonies on March 1, 1996. (Michael Abrams/Stars and Stripes) 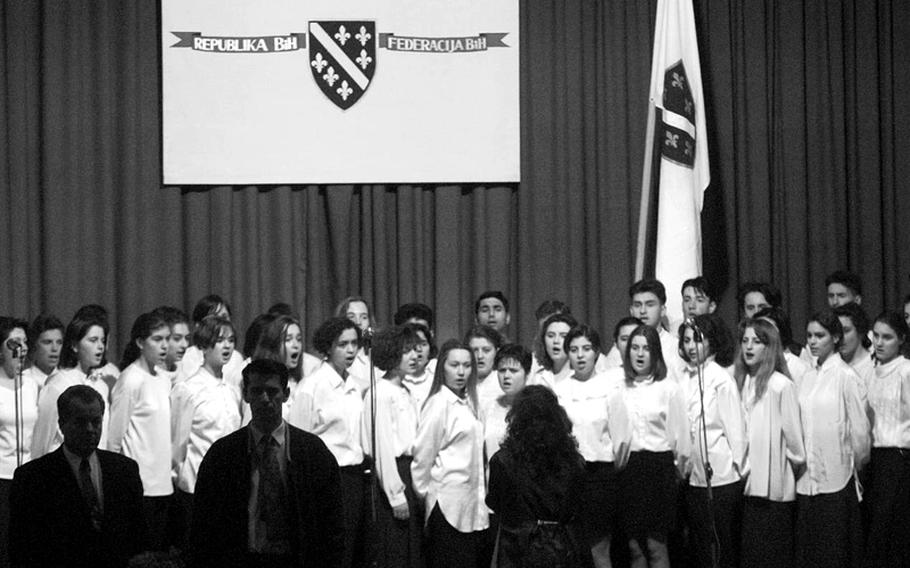 A choir sings the Bosnian national anthem at an official celebration of Bosnian independence held at a theater in downtown Tuzla on March 1, 1996. (Michael Abrams/Stars and Stripes) 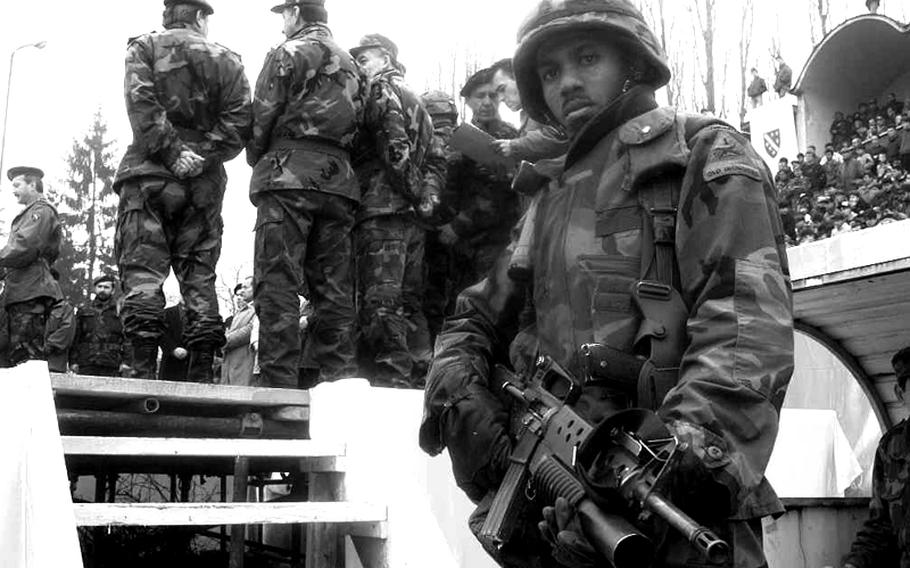 Sgt. Jeffrey Hunter of the 501st Military Police company out of Baumholder, Germany, provides security for the American delegation to the Bosnian Independence Day celebration at Tuzla's stadium on March 1, 1996. (Michael Abrams/Stars and Stripes) 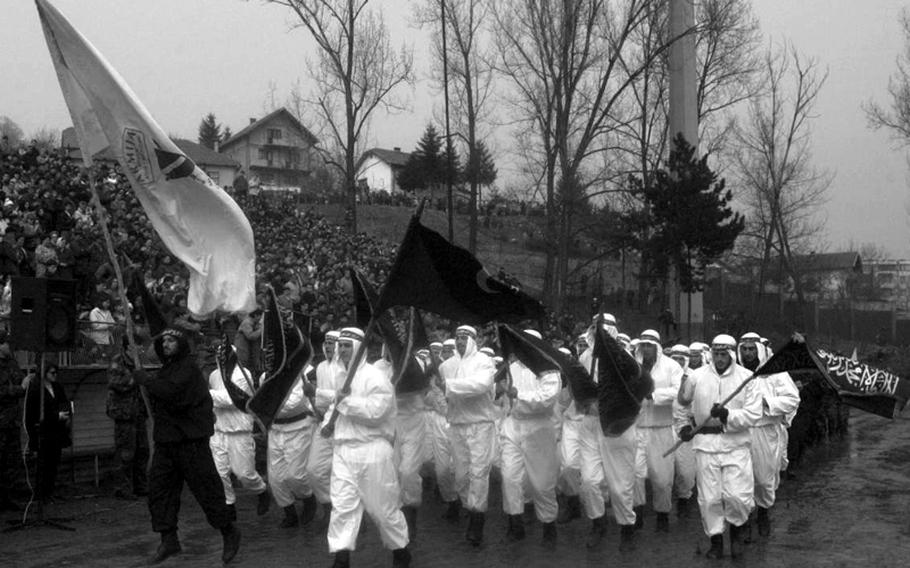 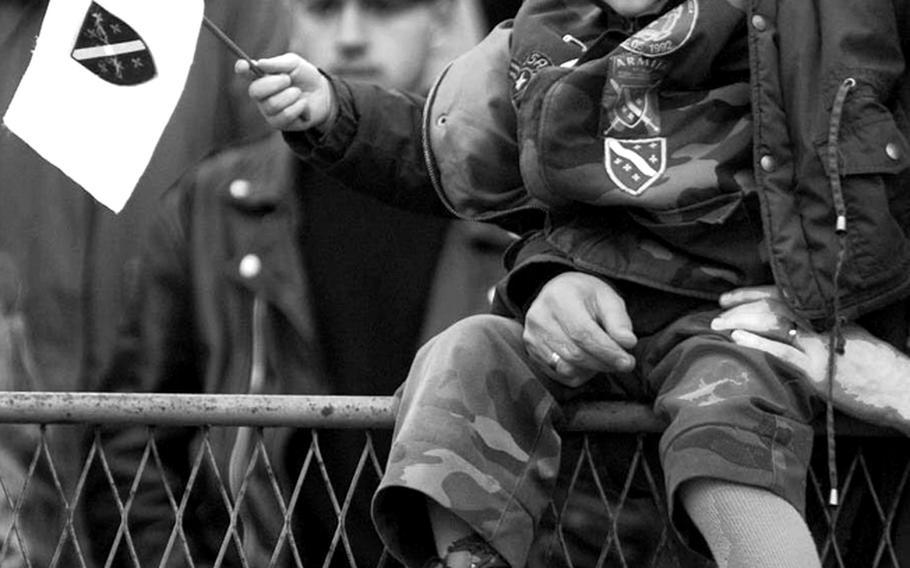 A youngster waves a Bosnian flag at an Independence Day celebration held at Tuzla's stadium on March 1, 1996. (Michael Abrams/Stars and Stripes)

TUZLA, Bosnia and Herzegovina &mdash; The mournful wail of an air-raid siren pierced the noontime air in Tusla on Friday. But this time the sound didn't herald war &mdash; but rather Bosnia's first Independence Day to be .celebrated in peace.

"Iwasn't very hopeful that this day would come," Refik Begovic, a Tuzla resident and a former soldier, said as he listened to the wail and recalled the nearly four-year war that tore apart his country.

"I never want my son to be in a position to fight like we did," said the 40-year-old father. of two children. "Bosnia and Herzegovina has earned a right to celebrate this day without any fighting."

On Feb. 29,1992, Bosnian Muslims and Croats voted for separation from Yugoslavia. Bosnian Serbs boycotted the vote.

In April 1992, Bosnia's civil war began when its Serbs refused to live in a Muslim-dominated country. The war continued until a cease-fire was called Oct. 12, 1995. Eventually, the warring factions initialed a peace pact in Dayton on Nov. 21, signing the treaty in Paris Dec. 14.

Since the vote for separation four years ago occurred on a Leap Day, March 1 was set as Bosnia's official Independence Day. On Friday, both civil and military ceremonies were held around the country.

In Tuzla, politicians met at a town hall to commemorate the war dead and listen to the newly composed national anthem sung by schoolchildren.

"The Bosnian spirit of people living together in peace conquered the evils that have occurred over the last four years," said Marijan Simic, the president of the Tuzlan county assembly. "Democratic principles will stay. Anarchy and totalitarianism will not survive. We must use politics and not guns to settle our differences."

The Bosnian 25th Division held ceremonies and speeches to commemorate its first anniversary.

"We formed this division from the average citizens, and it existed on the strength of its people," said Col. Refik Lendo, the division's commander.

Remembering those maimed and killed during the war, Lendo urged others not to forget the families of soldiers. And Lendo, who will be sending most of his force home by April 18, said the country has to look toward its future without forgetting its past.

"As soldiers return to a life of peace, we cannot forget their sacrifice and must make a commitment to those who gave their lives for our independence," he said.

An estimated 200,000 people died on all sides during the war. Many people fled the country, and more than a million were left homeless.

In the evening, social celebrations took place at the soccer stadium and across the city.

Rasa Ramic, 23, fled her native Zvornick when Bosnian Serbs overran the city. "With the peace, I hope that I can go back home as soon as the political and military situation becomes stable," she said.

Selim Beslagic, Tuzla's mayor, was shaking hands with people on the street in the warm afternoon. He said he was optimistic about the future, if the nation gets help from the World Bank and other financial institutions.

"We must reinvest in the economy. There is no future without a strong economic base," Beslagic said. "It will involve a lot of work and a lot of sacrifices for a lot of people.

While the holiday was celebrated in style in Tuzla, the day was pretty much like any other in Sarajevo.

Offices and schools were closed, and, that meant downtown streets were crowded with strolling citizens. Most had to be content with window shopping because cash remains a scarce commodity for most in the Bosnian capital.

No other official celebrations were planned in the capital, although restaurants and bars were expected to be unusually crowded Friday night, with a lifting of the usual nightly curfew.