At last, Germany bases get a blanket of snow 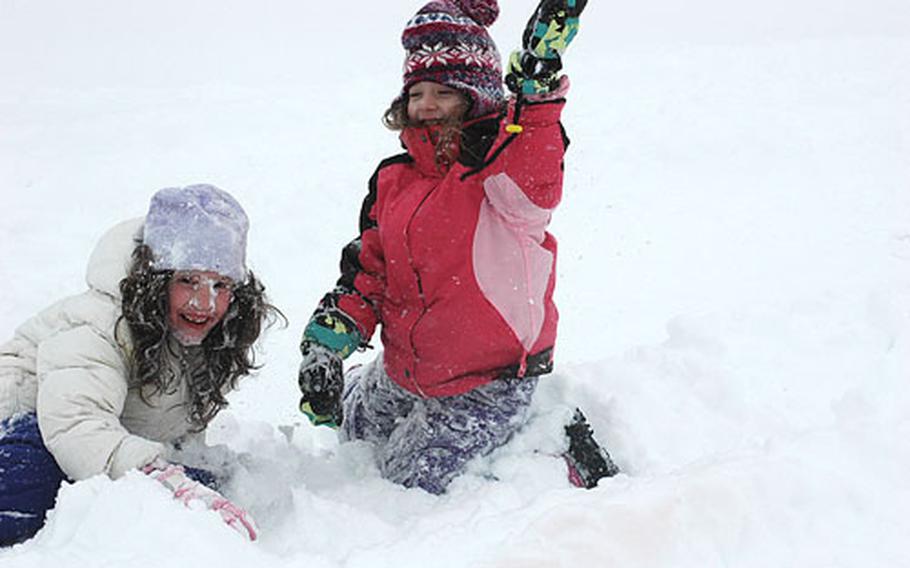 Rachel Bragg, 8, left, and her 5-year-old sister, Grace, climb out of the snow after wiping out during a sled run Wednesday at Robinson Barracks in Stuttgart, Germany. The girls were celebrating a day off from school after Stuttgart received 12 inches of snow overnight. (Charlie Coon / S&S)

Rachel Bragg, 8, left, and her 5-year-old sister, Grace, climb out of the snow after wiping out during a sled run Wednesday at Robinson Barracks in Stuttgart, Germany. The girls were celebrating a day off from school after Stuttgart received 12 inches of snow overnight. (Charlie Coon / S&S) 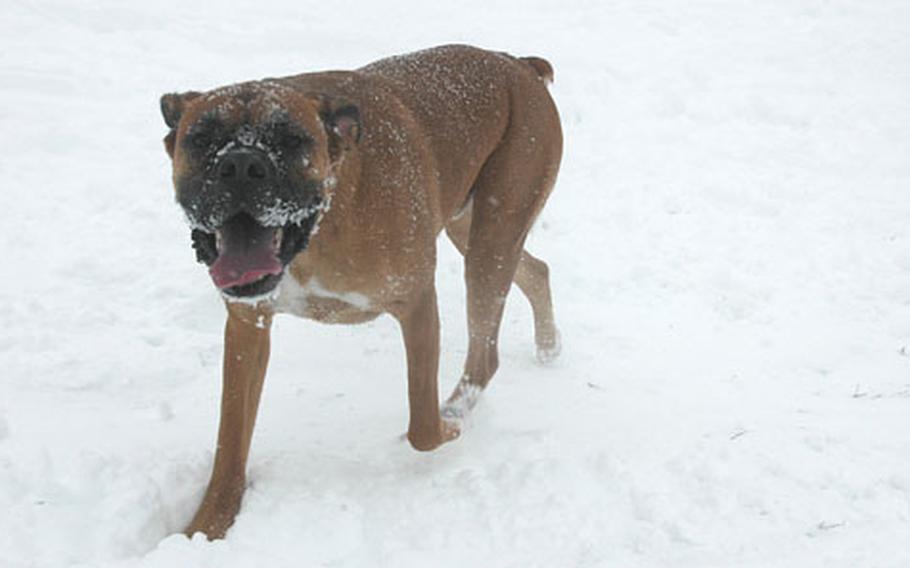 Rachel Bragg, 8, left, her sister, Grace, 5, get ready for a sled run with help from their father, Army Maj. Andrew Bragg, on Wednesday at Robinson Barracks in Stuttgart, Germany. The girls were celebrating a day off from school after Stuttgart received 12 inches of snow overnight. (Charlie Coon / S&S)

It took a little longer than usual, but several military installations in southern Germany saw their first significant snowfall Wednesday.

Stuttgart saw the most with 11 inches, while Grafenw&#246;hr, Hohenfels, Katterbach and Bamberg all received anywhere from 5 to 7 inches of accumulation throughout the day, according to Capt. Matthew Hauke, operations floor supervisor for the 21st Operational Weather Squadron in Sembach, Germany. The 21st handles weather forecasting for Europe.

Hauke said there were two heavy bands of snow during the day, one going from Stuttgart northwest to Grafenw&#246;hr and Hohenfels, and the other in the southeast corner of the country, where accumulation was between 10 and 14 inches.

Hauke added that temperatures were expected to stay below freezing until at least Saturday, meaning that snow could stay on the ground for at least a week in some places.

Conditions in Bamberg worsened throughout the day, and all garrison agency personnel except mission-critical and emergency workers were sent home at 3 p.m., said spokeswoman Renate Bohlen.

Road conditions around Stuttgart were declared &#8220;black,&#8221; meaning the only garrison vehicles allowed on the road were emergency vehicles, military police cars and snowplows. All garrison offices were closed, and nonessential personnel were either sent home or told not to come into work, according to garrison spokesman Hugh McBride.

The Department of Defense Dependents Schools-Europe canceled classes in Stuttgart and Schweinfurt.

The snowfall was fine with 8-year-old Rachel Bragg, daughter of Army Maj. Andrew and Nicole Bragg in Stuttgart. Rachel, who went sledding with her three younger sisters at Robinson Barracks, said the best thing about sledding was, &#8220;having a ton of fun.&#8221;

In the alpine community of Garmisch, home of the Edelweiss Lodge and Resort, George C. Marshall European Center of Security Studies, Artillery Casern and NATO School about 6 inches of snow had fallen by midmorning. Road conditions were rated &#8220;amber,&#8221; indicating some snow and ice and that motorists should drive with caution.

In Bamberg and Grafenw&#246;hr, road conditions were red, meaning there had been heavy snow with dangerous driving conditions and that motorists should avoid driving when possible. Schools there started two hours late, according to DODDS-Europe spokesman Dennis Bohannon.

For the 173rd Airborne Brigade Combat Team soldiers training in Grafenw&#246;hr for an Iraq deployment sometime this year, the weather didn&#8217;t have much effect.

&#8220;As of now, no ranges were shut down because of the weather. Training conditions change; you&#8217;ll never know what kind of conditions you&#8217;ll be fighting in,&#8221; said brigade spokesman Maj. Nick Sternberg.

Stars and Stripes reporter Charlie Coon contributed to this story.