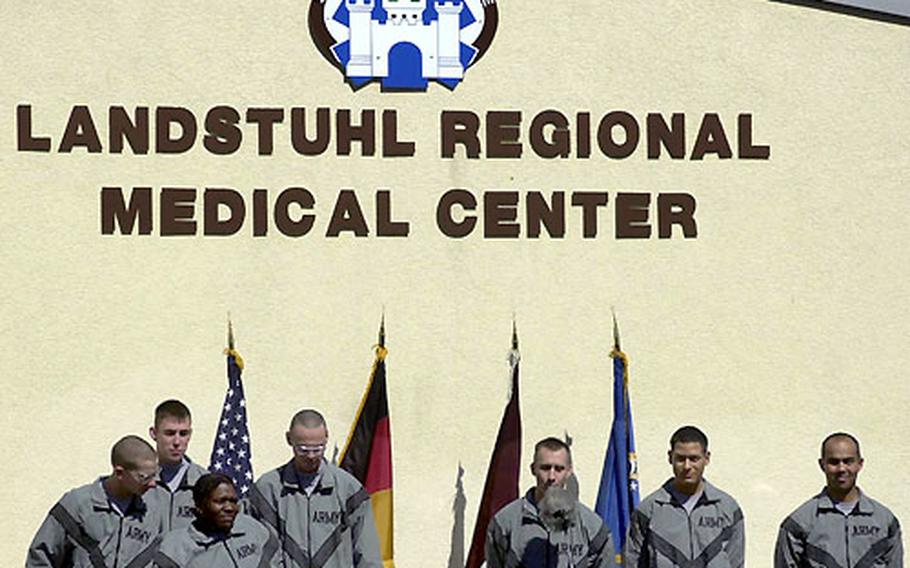 LANDSTUHL, Germany &#8212; The seven former POWs rescued Sunday from Iraq were expected to return home to the United States on Saturday.

Since their arrival at Landstuhl Regional Medical Center on Wednesday night, the seven former POWs have been getting gently reacquainted with &#8220;the public.&#8221; That is, everyone outside their own military units, the hospital&#8217;s commander said Friday.

The soldiers &#8212; five from an Army maintenance unit and two Army aviators &#8212; were in a separate hospital ward created just for them, but were mixing with the staff and other soldiers when they felt comfortable, Col. David Rubenstein said.

This &#8220;decompression&#8221; period is one of the reasons that the former captives were taken to Landstuhl from Kuwait, rather being flown directly to the United States, he said.

&#8220;They were surrounded by their fellow soldiers on the battlefield for the last few days before coming here. When they return to the States, they&#8217;ll get extensive public and media attention. This allows them to decompress,&#8221; he said.

The soldiers all were captured March 23 and were rescued Sunday by American troops near Tikrit, Iraq.

Williams, the only one who spoke on Friday, thanked the hospital staff and the American public for their &#8220;tremendous support.&#8221;

While at Landstuhl, the soldiers have been undergoing treatment for their wounds. Johnson, Hernandez and Hudson were shot. The other soldiers don&#8217;t have any serious physical injuries, Rubenstein said.

A team of chaplains, psychiatrists and other specialists are debriefing the soldiers, in case they can glean any information about other troops missing in Iraq.

Since the soldiers&#8217; arrival, they have passed the time by watching videos and catching up on the news. Some have eaten at the dining facility and are being greeted by fellow troops who are giving &#8220;handshakes and wishing them well,&#8221; Rubenstein said.

On their 10-hour flight from Iraq to Landstuhl, the soldiers were cared for by a nine-member medical team from the 491st Expeditionary Aeromedical Evacuation Squadron. The squadron is made up of Air Force Reserve and National Guard troops from four stateside bases.

Medical team members, who spoke to the media Friday afternoon, said they found out Wednesday morning that the former POWs would be among their passengers.

&#8220;We definitely had a big lump in our throats knowing who we were taking care of,&#8221; said Tech. Sgt. Russell Goodwater, a medical technician.

The crewmembers said they were proud to carry the seven out of the desert. Other wounded soldiers on the flight joined in the camaraderie.

Before leaving the aircraft, the rescued POWs signed their names and wrote messages on the inside of the airplane&#8217;s fuselage. One drew an American flag; another the POW insignia, which shows a blindfolded soldier and the words &#8220;Never Forget&#8221; next to it.

The medical crew said the soldiers wanted to stay together on the flight and had been reluctant to leave their units in Kuwait.

Rubenstein said they have become a particularly tight-knit group because of their captivity &#8212; a reaction that he called &#8220;the fellowship of the foxhole.&#8221;

&#8220;They have been fighting for each other and protecting each other. When you go through a personal event such as being taken captive, the bonding is very strong,&#8221; Rubenstein said.

As they heal physically and mentally, each will react differently, he said.

Once the soldiers are back in the Statesthey will stay at their home stations and remain relatively sequestered until they are ready to go to their own homes, he said.