At Land Combat Expo, focusing on the lessons of Afghanistan Spc. Jeremy Ende of 1st Battalion 7th Field Artillery out of Schweinfurt, Germany, shows Will Pyle, 4, around an M109A6 Paladin on Thursday at the Land Combat Expo. (Michael Abrams / S&S)

Spc. Jeremy Ende of 1st Battalion 7th Field Artillery out of Schweinfurt, Germany, shows Will Pyle, 4, around an M109A6 Paladin on Thursday at the Land Combat Expo. (Michael Abrams / S&S) 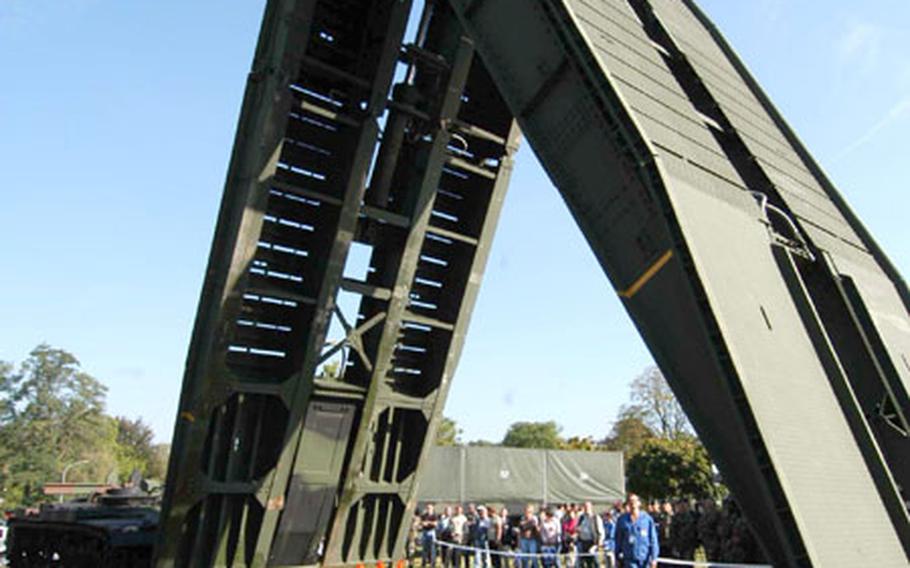 The 21st Theater Support Command showed off its armored-vehicle-launched bridge, a 63-foot-long bridge launched by an M-60 tank, at the Land Combat Expo. (Michael Abrams / S&S)

Specific knowledge of Afghanistan is an invaluable tool for junior leaders trying to work under the harsh conditions of Operation Enduring Freedom, soldiers said Thursday.

Peters led a seminar at the Land Combat Expo, one of several this week focusing on &#8220;lessons learned&#8221; from recent combat operations.

He urged solders to be aware of treacherous roads in the mountainous region.

&#8220;Soldiers seem to have this problem when they are downrange about not wearing their seat belts. We&#8217;re having more problems with ejections and rollovers than with combat injuries, which is stupid.&#8221;

Support commands should also consider that fuel is extremely valuable, especially in the winter, and theft by the locals is common.

Peters also gave soldiers a list of several books about the history of Afghanistan and the nature of extremist Muslim military tactics.

Several of Thursday&#8217;s &#8220;lessons learned&#8221; seminars took a geographically diverse look at lessons learned from U.S. involvement in conflicts around the globe.

The seminar began with a comprehensive look at the area&#8217;s geography, culture, religion, history, ethnic tensions and more.

Presenter Maj. Seth Goldberg said it was vital to understand the region&#8217;s culture and its warring ethnic groups &#8212; the Albanians and the Serbs &#8212; in order to successfully conduct operations in the region.

Goldberg&#8217;s presentation also covered communication through command channels and operational organization. He also discussed the lack of an articulated goal or political solution in the region, an issue that peacekeeping forces continue to grapple with.

While many soldiers at the seminar were likely headed for a very different combat theater &#8212; many to Iraq or Afghanistan &#8212; Goldberg said any soldier preparing to head to a hot zone could benefit from the session&#8217;s wisdom.