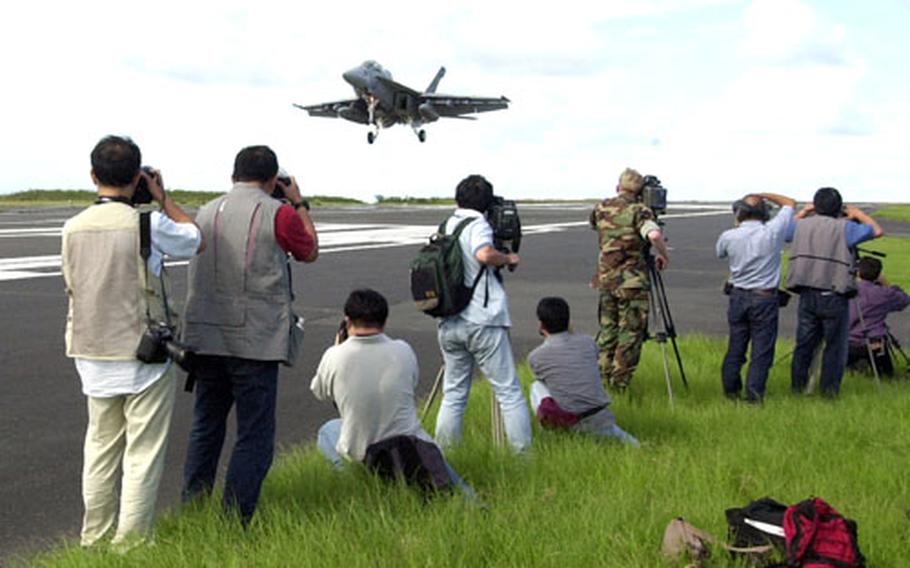 Members of the press cover the Iwo Jima landing of an F-18F Super Hornet on Monday. (T.D. Flack / S&S)

Members of the press cover the Iwo Jima landing of an F-18F Super Hornet on Monday. (T.D. Flack / S&S) 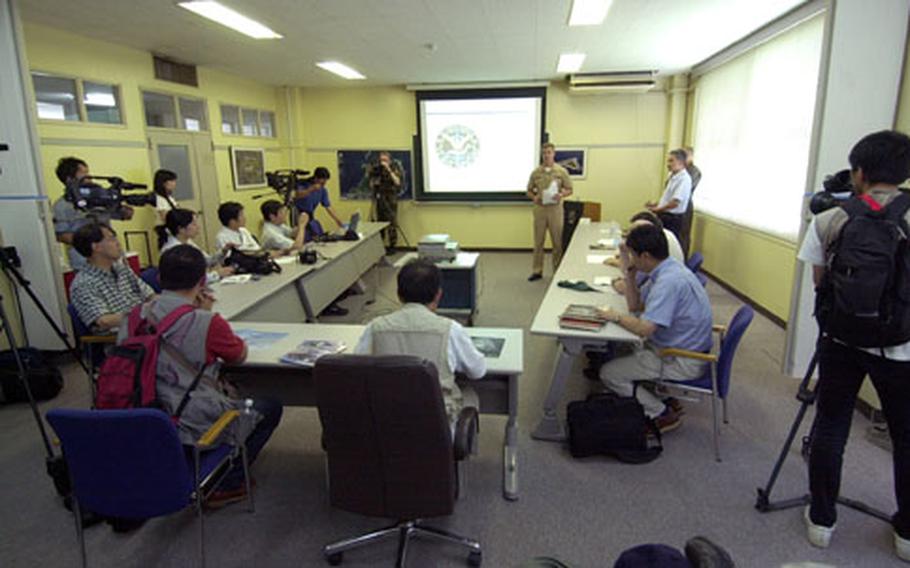 Members of the media receive a briefing and ground rules pertaining to their excursion Monday to Iwo Jima from Cmdr. John Wallach, CNFJ spokesman, center, at right. (T.D. Flack / S&S) 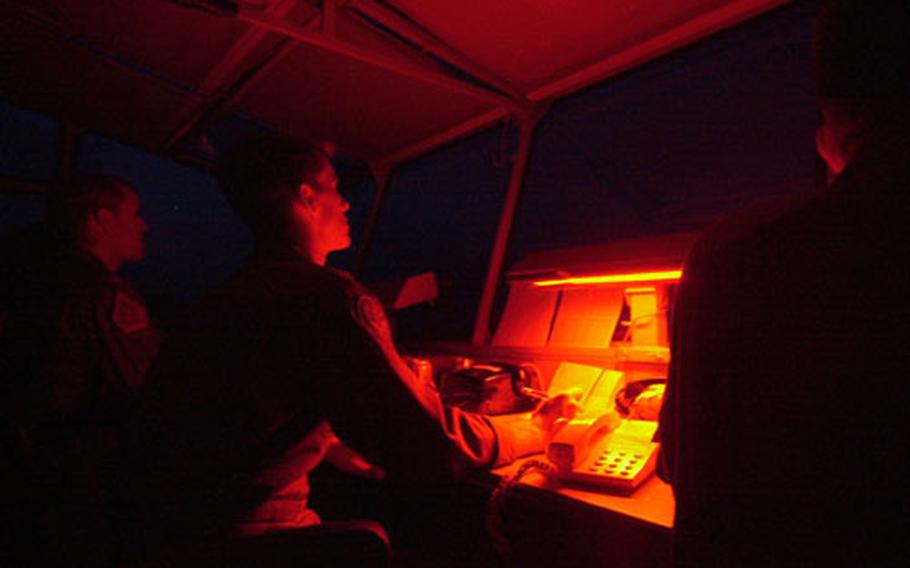 The U.S. Navy flew 20 Japanese journalists this week to the small, sulfurous island where U.S. Marines killed almost 20,000 of their forebears some 60 years ago in one of World War II&#8217;s fiercest, bloodiest battles.

The journalists viewed the black-sand beaches where all those Japanese soldiers had gone down fighting rather than surrender in the face of an overwhelming American force and be disgraced. They saw the memorial commemorating the U.S. Marines who fought there &#8212; 6,821 were killed and more than 20,000 wounded &#8212; before finally raising the U.S. flag on Mount Suribachi.

And the journalists bowed and placed bouquets of flowers they&#8217;d brought, along with their cameras, at a shrine where incense wafted in the air almost as strongly as the sulfur emanating from the ground.

Instead, the visit had to do with a current defense issue that is among the thorniest and most persistent irritants between the U.S. and local Japanese governments: night landing practice, or NLP, and the &#8220;heart-stopping&#8221; noise, as one aviator described it, the jets make.

&#8220;It was an education and orientation visit &#8230; to make sure they understood the lengths we go to mitigate the noise, and to siphon these high-tempo operations down to Iwo Jima,&#8221; said Cmdr. John Wallach, CNFJ spokesman.

The isolated, somewhat desolate island about 750 miles from Carrier Air Wing 5&#8217;s home base of Atsugi Naval Air Facility has, since 1991, been where many of the air wing&#8217;s 100 fliers have practiced their touch-and-gos over a period of about 10 days, no more than 10 days before deploying on the USS Kitty Hawk.

But although Iwo Jima is suitable for NLP because it&#8217;s uninhabited except for a small number of Japanese Self-Defense Forces, it is less than ideal in several other regards, Navy officials told the journalists.

It&#8217;s far from the home base, has only one runway and is subject to sudden bursts of bad weather. Those factors, as well as the limited time window and the number of aviators who must complete the practice, each making several passes on three days and three nights, make it impossible for all of the training to be done there.

So some of it still is done at Atsugi, in an area where some 510,000 people live nearby. Wallach described the base there as like &#8220;having a landing strip in the middle of Queens.&#8221;

In some years when NLP has been apportioned out to Misawa and Yokota air bases and Iwakuni Marine Corps Air Station, some cities briefly have suspended friendly relations with the Navy in protest.

At Atsugi, Wallach says, only the &#8220;quieter&#8221; planes &#8212; E-2 Hawkeyes, C-2CODs, S-3Bs and a few propeller planes &#8212; do NLP. Also to lessen the noise for Atsugi residents, officials said, fewer planes fly the landing pattern, at a far higher altitude than they do on approach to the Kitty Hawk.

What can be done?

If the Navy had its way, officials have indicated, an outlying field 100 miles or so from Atsugi would be found, a place where aviators could train year-round without bothering people. Iwakuni sometimes has been mentioned as such a place; work on a runway there over the water is ongoing. But Iwakuni&#8217;s residents already have complained loudly about noise.

All the difficulties were on hold for a while Monday as journalists were bused to the runway and began enthusiastically snapping photos just a few yards from where Atsugi&#8217;s new Super Hornets screamed into view, touched their wheels on the runway and roared off to do it again. It was loud but thrilling, and that was just the daytime landings.

The journalists, after dinner in the Iwo Jima mess hall, again were bused to the runway to watch the NLP just as the sun set and the sky turned from pink to indigo. Super Hornets lit by red, amber and green lights streaked into view and thundered off again, one after the other, every 60 seconds.

Makoto Kichiji, for one, was impressed. &#8220;After \[watching\] the demonstration flight, I keenly felt the need for training,&#8221; said Kichiji, an editor at a major Japanese monthly magazine. &#8220;I could agree with the explanation by the military officer that insufficient training put crewmembers&#8217; lives at risk.&#8221;

In the end, Kichiji said, he came away believing that training at Atsugi is necessary for now but that the Japanese government should conduct a study to find an alternative site and determine the cost to move the training there.

But, he added, one thing lacking from the presentation was a clear explanation of why Japan is responsible for providing the training site for the Navy.

&#8220;Cooperation between Japan and U.S. was necessary under the alliance and it will be necessary in the future as well,&#8221; he said. &#8220;But without sufficient explanation, understanding and support from people, including local residents, it will not be possible.&#8221;