At Iwakuni, 18,000 black widow spiders have been caught in last six years 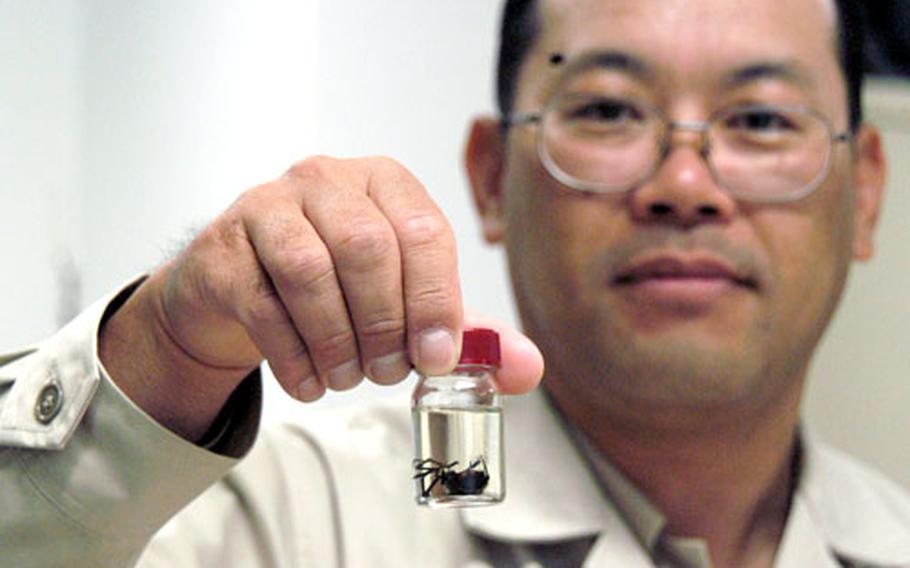 Masayuki Shiromoto, who heads the pest control division at Marine Corps Air Station Iwakuni, holds a dead black widow spider. Since their discovery at Iwakuni in 2000, more than 18,000 spiders have been caught on base. (Juliana Gittler / S&S)

Masayuki Shiromoto, who heads the pest control division at Marine Corps Air Station Iwakuni, holds a dead black widow spider. Since their discovery at Iwakuni in 2000, more than 18,000 spiders have been caught on base. (Juliana Gittler / S&S) 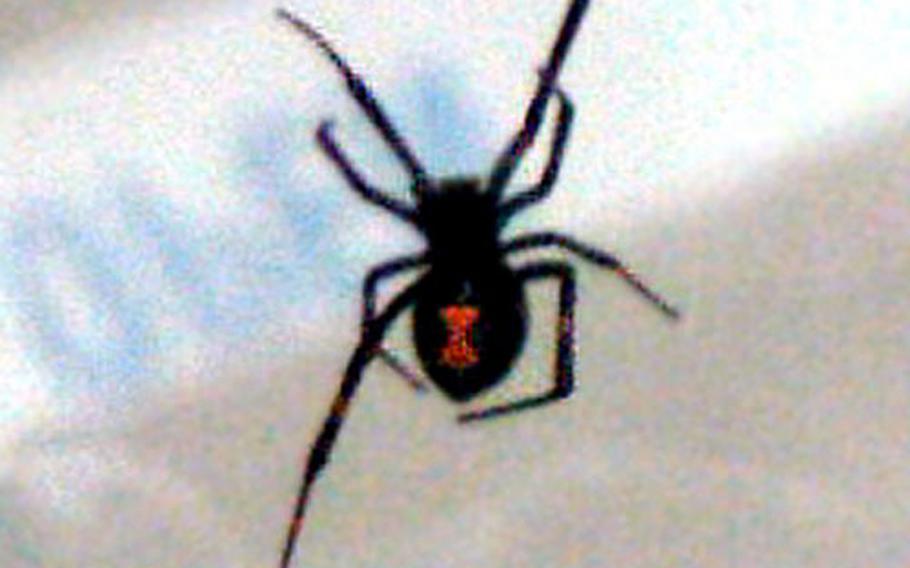 The underside of a black widow spider kept at the pest control office at Marine Corps Air Station Iwakuni. Black widows are known for the distinctive hourglass pattern on their bellies. (Juliana Gittler / S&S)

MARINE CORPS AIR STATION Iwakuni, Japan &#8212; All base officials know is that the creatures appeared six years ago and aren&#8217;t native to Japan.

The black widow spider, infamous for its male-eating female and mild toxicity, has become a nagging problem at Iwakuni &#8212; more for the alarm it has created than a serious threat, officials say. More than 18,000 have been caught so far, although the numbers have dropped dramatically as the base instituted a spider-catching program.

But it&#8217;s a troubling enough problem that it requires about half the base pest control office&#8217;s time.

The spiders are actually smaller than some local spiders &#8212; they&#8217;re fairly large by U.S. standards &#8212; and have nonpatterned, messy looking and sticky webs compared with more neat and patterned webs of local spiders, said Masayuki Shiromoto, who heads the pest control and roads offices.

Every black widow found on base is killed and recorded. Base leaders meet regularly with local city officials for program updates and an entomologist working for U.S. Forces Japan visits Iwakuni to check on it.

For the most part, it comes down to the seven people working in pest control doing inspections, bolstered by base resident sightings, although most sightings have occurred away from residential areas. Residents can call a special number to report a suspect spider.

More than 6,000 spiders were caught in 2001, when the eradication program began. Most were juveniles but more than 1,000 adult females were discovered. Females are the problem &#8212; their bite can cause illness, particularly in the elderly, young and sick, said base spokeswoman Master Sgt. Lesli Coakley.

The number caught dropped to fewer than 5,000 in 2002, and about 2,000 each year thereafter. Thirty-six have been caught this year, according to pest control reports.

The male spiders appear most frequently in the late summer and the females and juveniles in the fall.

With the eradication program in place, Dunaway said the base will continue following the current procedures, using warnings posted on the base information channels and in news reports.

Last year, the government of Japan erected a low Plexiglas fence around part of the base to contain the spiders.

The bigger challenge, he added, might be changing perceptions that the base is overrun.