At home or at war, degree opportunities never out of reach for servicemembers 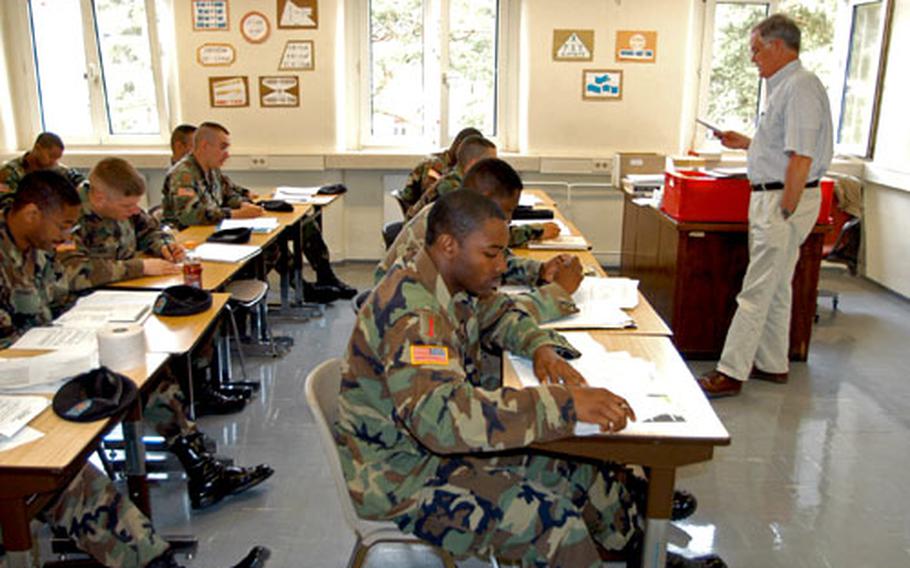 Students go over a quiz with instructor Steve Laxton on Friday in a Functional Academic Skills Training course at the Army education center on Warner Barracks in Bamberg, Germany. The course is designed to help students improve their test scores. (Rick Emert / S&S)

Students go over a quiz with instructor Steve Laxton on Friday in a Functional Academic Skills Training course at the Army education center on Warner Barracks in Bamberg, Germany. The course is designed to help students improve their test scores. (Rick Emert / S&S) Students take a quiz Friday in environmental science during a lunch-hour class offered through University of Maryland University College at the Army education center on Warner Barracks in Bamberg, Germany. (Rick Emert / S&S)

Whether taking college courses for promotion or to earn a degree for life after the military, education opportunities are plentiful for troops at their home bases and while deployed to hazardous duty areas.

Each of the schools offers traditional or online courses, Karczewska said.

Online courses also are available through eArmyU, an online portal that offers classes from 29 colleges and universities.

Troops register at the Web site and must meet certain eligibility requirements to take courses and be eligible for a laptop computer, Karczewska said.

&#8220;The advantage to soldiers is that the books are paid for, and there is free tutoring,&#8221; Karczewska said.

Servicemembers also can check with local education offices about taking college-level tests that allow them to forgo taking classes if they pass the examination for the course.

Staff Sgt. Jonathan Todd, a television system engineer for American Forces Network Heidelberg, earned 42 credits toward his bachelor of science and liberal arts degree through such tests, earning a total of 64 credits in two years while still working full time for the Army.

Troops can earn up to 50 percent of credits toward their degree and avoid using their tuition assistance, since the tests are free to soldiers, said Chuck Walker, deployment opportunities officer for IMA-E Army Continuing Education System.

That tuition assistance is worth up to $4,500 per fiscal year, at a rate of $250 per credit hour, according to Karczewska.

The Montgomery GI Bill Top-up program allows soldiers to use their GI Bill funds to cover the cost of courses that run over the $250, said Lorra Tucker, a guidance counselor from the 279th Base Support Battalion Army Education Center in Bamberg, Germany.

&#8220;If a servicemember has to pay out of pocket, he can apply to get reimbursed and that comes out of his Montgomery GI Bill, if he is eligible for that,&#8221; she said.

Additionally, active-duty servicemembers and reservists who have been activated may be eligible to increase their Montgomery GI Bill funding by $5,400 by adding $600 to their GI Bill account, said Marsha Moses, education services officer at Bagram Air Base, Afghanistan.

According to IMA-E officials, about 26 percent of eligible servicemembers in Europe are taking advantage of the education office services, but the percentage is probably higher in Todd&#8217;s unit.

&#8220;I&#8217;ve become the unofficial education counselor for my unit because I&#8217;m sort of a success story,&#8221; said Todd, who later this year goes into the Army Reserve in the chaplain candidate program in hopes of becoming an Army chaplain.

&#8220;I give a standard briefing to the soldiers. I would tell soldiers that if they are concerned about finding time for courses because of long hours at work or a deployment, that CLEP (College Level Examination Program) or [Defense Activity for Nontraditional Education Support] tests are the way to go. If their schedules are too busy, these tests will help them with their goals of earning a degree.&#8221;

With hundreds of thousands of servicemembers deployed around the world at any given time, their pursuit of college degrees does not have to suffer.

In the meantime, education offices in Europe, such as the one in Bamberg, Germany, help troops deployed to Iraq, said Lorra Tucker, guidance counselor from the 279th Base Support Battalion Army Education Center.

&#8220;We are able in these areas to provide all services that they would get in garrison,&#8221; Moses said. &#8220;In addition to college instruction, we also have Head Start classes that teach the soldiers the host nation language.&#8221;

Military members granted authorization from the colleges teach the classroom courses, but anyone with access to the Internet can take online courses.

&#8220;You might think that soldiers deployed to Afghanistan or Iraq don&#8217;t have time to take courses,&#8221; Moses said. &#8220;The opposite is true. &#8230; They are either working or not working. At home they have a training cycle, a garrison cycle where they have duties in the community, they have their families and even the bar or a baseball game. When they are deployed, they don&#8217;t have any of that.&#8221;