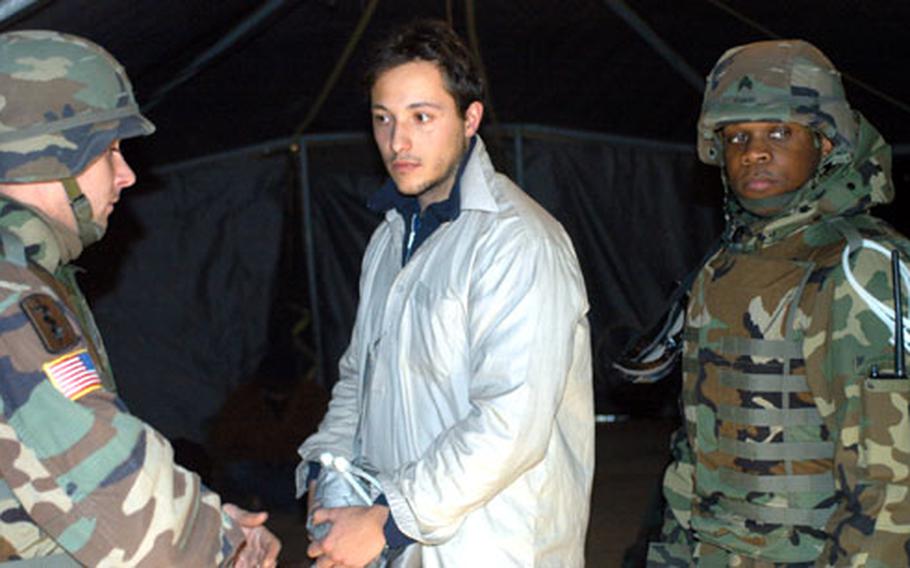 Staff Sgt. Scott Adkins, left, a 92nd Military Police Company medic, talks to a “detainee” Thursday who claims he was maltreated during his capture. The role-playing detainee was being escorted through detention facility processing by Sgt. Tyion Stanley, right. The three were training at the Combat Maneuver Training Center in Hohenfels, Germany, to gear up for an Afghanistan deployment next spring. (Rick Emert / S&S)

HOHENFELS, Germany &#8212; Soldiers from the military police and military intelligence communities are training together at a mock prison in Hohenfels in hopes that the Army can avoid another Abu Ghraib-like prison scandal.

Members of the 709th Military Police Battalion are working alongside soldiers from the 165th Military Intelligence Battalion during the two-week exercise at the Combat Maneuver Training Center. The training wraps up Sunday.

For the exercise, a portion of the training center was made to replicate a forward operating base in Afghanistan, complete with a nearby detention facility, which can hold up to 50 prisoners.

The exercise marks the first time since before the Persian Gulf War that MPs and MI soldiers have trained together before a deployment, said Capt. Matt Palmer is from Company E, 165th MI Battalion.

As if running the mock facility weren&#8217;t enough, the training planners threw in a couple of scenarios to heat things up.

&#8220;We inject various things into the detention facility training,&#8221; said Maj. Roger Hedgepeth, 709th MP Battalion operations officer. &#8220;We will have a [car bomb] go off at the gate killing MPs and prisoners, and the soldiers have to quickly lock down the facility.&#8221;

Hedgepeth said the training is an important step in preventing another prisoner abuse scandal similar to Abu Ghraib.

However, the mistreatment will not be as blatant as the abuse recorded in the infamous Abu Ghraib photos.

&#8220;We want to make sure that the abuse at Abu Ghraib never happens again,&#8221; said Capt. Clint Mundinger, who ran the detention facility training for the 709th MP Battalion. &#8220;As far as the MP and MI relationship, we each need to know how the other side operates so there is no confusion and no mix-ups.&#8221;

Capt. Jamica Powell, commander of the 9th Military Police Detachment &#8212; the soldiers who run the Mannheim confinement facility &#8212; has been on hand throughout the training as an observer-controller.

&#8220;They have done absolutely fabulous,&#8221; she said. &#8220;Detention operations have suddenly become a different mission for MPs. Although it is not much different than law enforcement, the detention facility is ... a real hot spot in the public eye right now.

&#8220;These soldiers have really grasped the concept of switching from warriors on the battlefield to properly handling detainees,&#8221; she said.

In addition to the prison training, the MPs spent five days on combat operations, such as performing cordon-and-search missions, setting up checkpoints, conducting combat patrols and acting as a quick-reactionary force, Hedgepeth said.

Overall, the soldiers said the training has been challenging and as realistic as it could be in a training environment.

Sgt. Christopher Hooper, of the 212th MP Company, called the training informative and said it is like learning a new military occupational specialty.

Lt. Col. John Garrity, the 709th&#8217;s commander, he wants his soldiers challenged in training, so they know how to react in Afghanistan next year.