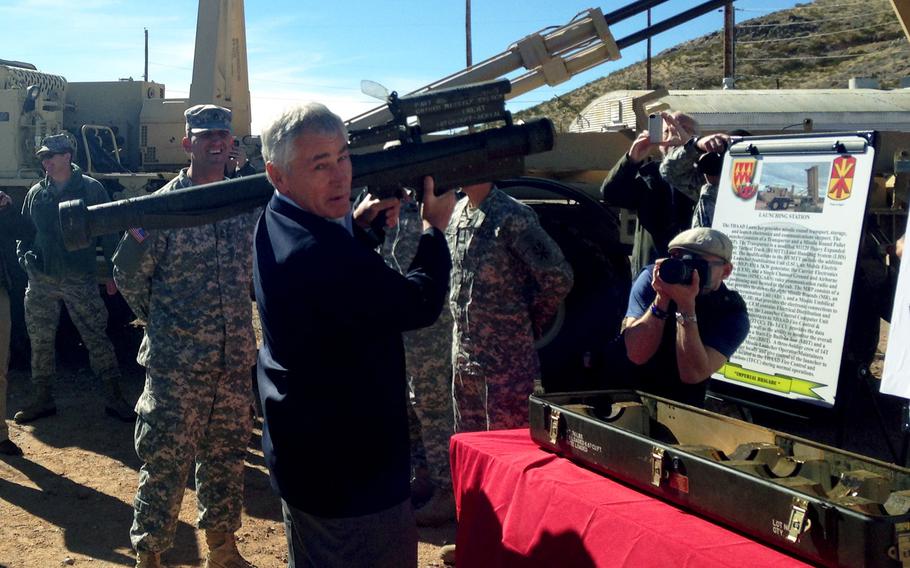 FORT BLISS, Texas — Secretary of Defense Chuck Hagel warned against American military overreach Thursday in what may be his last major speech as Pentagon chief.

Hagel’s remarks came at a time when America is again deploying troops to Iraq to try to defeat insurgents. The U.S. military has also been injected into Syria’s civil war, waging an air campaign and planning to train moderate Syrian rebels to take on the Islamic State terrorist group and other radical factions. Still, the Iraqi government and some in Congress are calling for the Obama administration to step up American military involvement in the conflict against the militants.

Hagel said the terrorism and fighting roiling the Middle East are being driven by deep tribal, religious and ethnic tensions.

He argued that some people are too quick to look for a military solution.

“Sometimes there are not immediate answers,” he said. “We Americans can test that. We can fight for that [and say], ‘Of course there’s an answer to the problem. We’ll fix it. Let’s go to war. Let’s commit troops … [But] we have blundered when we have tried to force issues and tried to force answers on other people.”

Hagel didn’t mention specific “blunders,” but he has been critical of the 2003-2011 Iraq War in the past.

Later in his remarks, he noted the toll that the post-9/11 wars have taken on the armed forces.

“Thirteen years of constant war have broken parts of our force,” he said. “There are tremendous strains, especially [within] our Army.”

He noted the efforts that the Pentagon and the Department of Veterans Affairs have taken to improve the health of the force, including providing more assistance for those dealing with post-traumatic stress disorder.

Although he doesn’t expect the U.S. to get involved in extended land wars in the next few years, Hagel thinks that continued instability around the world will only create more need for possible U.S. military intervention.

“This is an issue that the American people are going to have to deal with on the basis of how much burden they want to carry,” he said. “We have to be smart about that, especially in this kind of world that is so hair-trigger.”

Hagel, a former Army sergeant, went through basic training here in 1967 before he deployed to Vietnam.

He joked that going through basic in the scorching heat was “a very enriching experience.”

“Drill sergeants in 1967 were not as humane” as they are today, he told the troops. “It’s enlightening and enhancing and educational when you are often asked, ‘How dumb are you? How could you be so stupid?’ That’s a hard one to answer.”

He said his experience in the Army was the defining time in his life.

“I don’t know anyone who isn’t defined by service in uniform,” he told the troops.

After his visit to Fort Bliss, Hagel went to the White Sands Missile Range in New Mexico, where as a young soldier, he was trained to fire “REDEYE” shoulder-fired, heat-seeking missiles. The technology was cutting edge at the time.

While there, he met with soldiers training to use the sophisticated Terminal High Altitude Area Defense, or THAAD, missile system. He also posed with a mockup of the REDEYE.

Hagel, the first enlisted man to serve as secretary of defense, is expected to be replaced next month by Ashton Carter after the Senate approves his nomination.