At FOB Summerall, the fallen live on through tributes 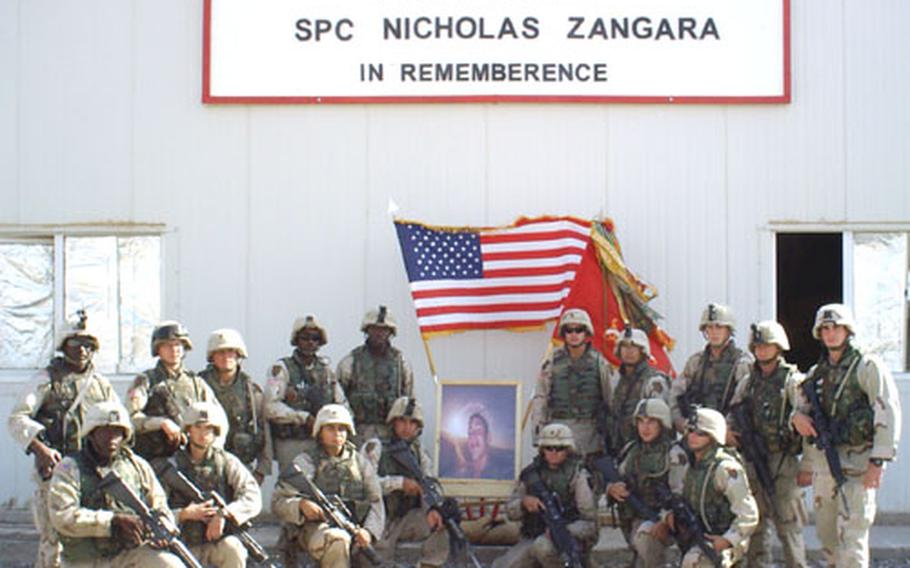 Soldiers from Battery C, 1st Battalion, 7th Field Artillery gather around a photo of their platoon-mate, Spc. Nicholas Zangara, at the dedication of the MWR facility at Camp Summerall in his memory. Zangara was killed July 24. (Wayne Chartier / Courtesy of U.S. Army)

Soldiers from Battery C, 1st Battalion, 7th Field Artillery gather around a photo of their platoon-mate, Spc. Nicholas Zangara, at the dedication of the MWR facility at Camp Summerall in his memory. Zangara was killed July 24. (Wayne Chartier / Courtesy of U.S. Army) 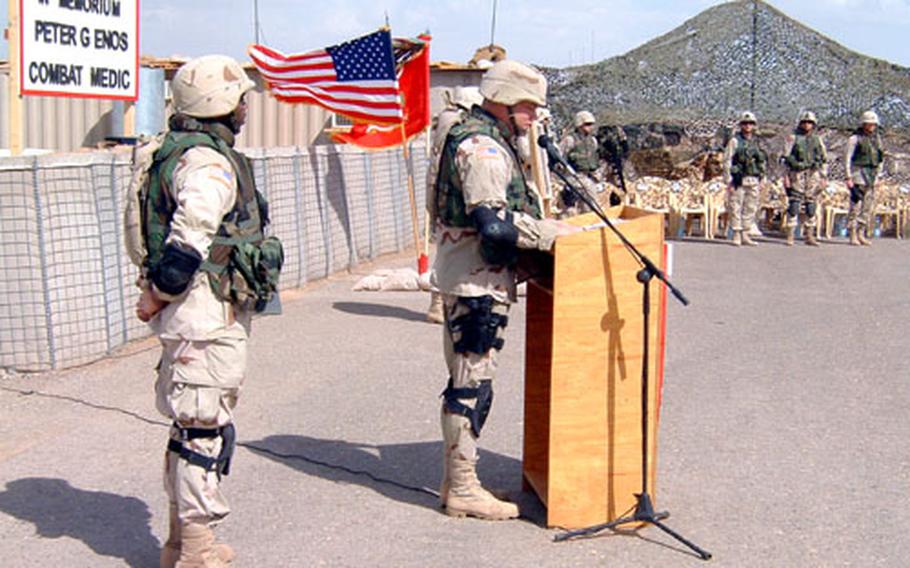 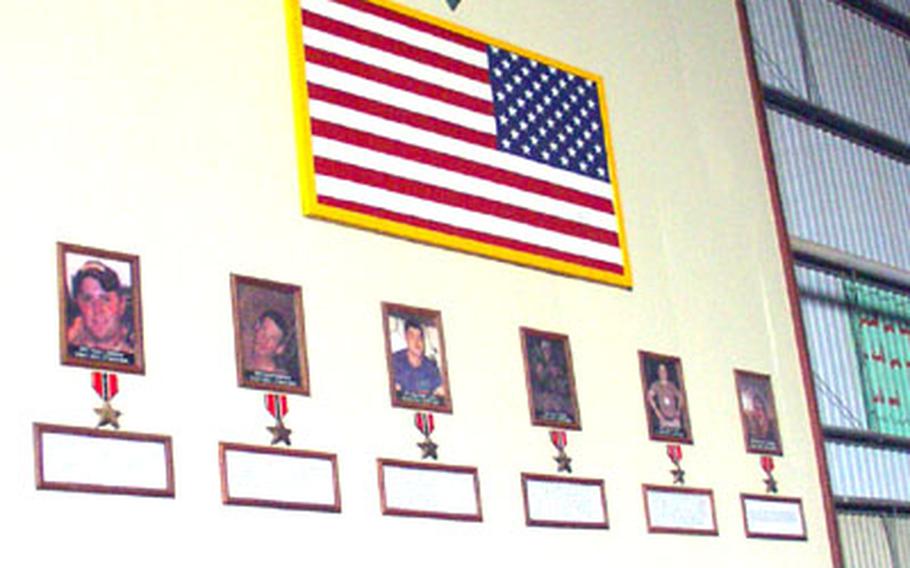 Task Force 1-7 dedicated this memorial wall on Veterans Day to the soldiers who were killed while stationed at Forward Operating Base Summerall, Iraq. (Steve Liewer / S&S)

FORWARD OPERATING BASE SUMMERALL, Iraq &#8212; Step onto Camp Summerall, and it doesn&#8217;t take long to determine who are the fallen brothers.

Their names and pictures are everywhere: at the Sgt. Peter Enos memorial aid station; the Spc. Nicholas Zangara MWR facility; the Spc. Joshua Henry memorial gym; and the Spc. Morgen Jacobs airfield. At least one facility is named after each of the nine Summerall soldiers who died in Iraq: eight from the 1st Battalion, 7th Field Artillery; and one from the 1st Battalion, 33rd Field Artillery.

On the wall of the 1-7 Field Artillery&#8217;s headquarters building (an old airport control tower named Firebase Laramore-Matthews, after two more lost comrades) are photos of each dedication ceremony, along with a wooden plaque listing the names and dates of each of the unit&#8217;s eight deaths and 19 injuries.

The latest addition is a giant 20-foot-by-60-foot memorial wall inside the Jones-Mallet Memorial Hall. Below the division and unit crests hang large photos of each man. The unit dedicated the wall on Veterans Day.

Their youthful faces smile down from framed portraits: Zangara&#8217;s distorted, goofy mug with an eerie halo around his head; the beefy, bald-headed Enos in a brown Army T-shirt, hands on hips with his head-cocked to one side; Sgt. 1st Class Raymond Jones, grinning widely beneath a shock of thick black hair, wearing a stunningly blue University of Florida Gators T-shirt.

The many memorials were the idea of Command Sgt. Maj. Wayne Sanders, 42, of Hedrick, Iowa, the 1-7 Field Artillery&#8217;s senior enlisted soldier.

He enlisted the unit&#8217;s two carpenters, Spc. Paul Diaz, 30, of Los Angeles, and Spc. Nathan Gintz, 22, of Dundee, Ohio, to create the monuments and signs in addition to their work of building furniture for the task force.

Diaz and Gintz said the unit didn&#8217;t know about the project until they were almost finished. As it neared completion, they focused lights on it in the otherwise darkened aircraft hangar. About 50 soldiers gathered around to see it.

The memorials have made an impression on the troops at Summerall.

Sanders said the unit will take the pictures and plaques that now hang in the headquarters buildings home to the 1-7 Field Artillery&#8217;s headquarters in Schweinfurt, Germany, when it heads back this spring.

He has talked to the sergeant major of the incoming unit, who has agreed to keep the names of the various facilities, replacing them only if the unit loses soldiers of its own.

The memorial wall will stay as it is. The faces on the wall, he said, will remind future soldiers that war isn&#8217;t just about glory. It&#8217;s about loss.