Navy Seabees with Naval Mobile Construction Battalion 4 build the frame for a concrete floor for a new tactical operations center at Forward Operating Base Sharana in Paktika province, Afghanistan, on March 15. The construction is part of a massive building effort to support the surge of troops ordered in December by President Barack Obama. (Dianna Cahn / S&S)

Navy Seabees with Naval Mobile Construction Battalion 4 build the frame for a concrete floor for a new tactical operations center at Forward Operating Base Sharana in Paktika province, Afghanistan, on March 15. The construction is part of a massive building effort to support the surge of troops ordered in December by President Barack Obama. (Dianna Cahn / S&S) 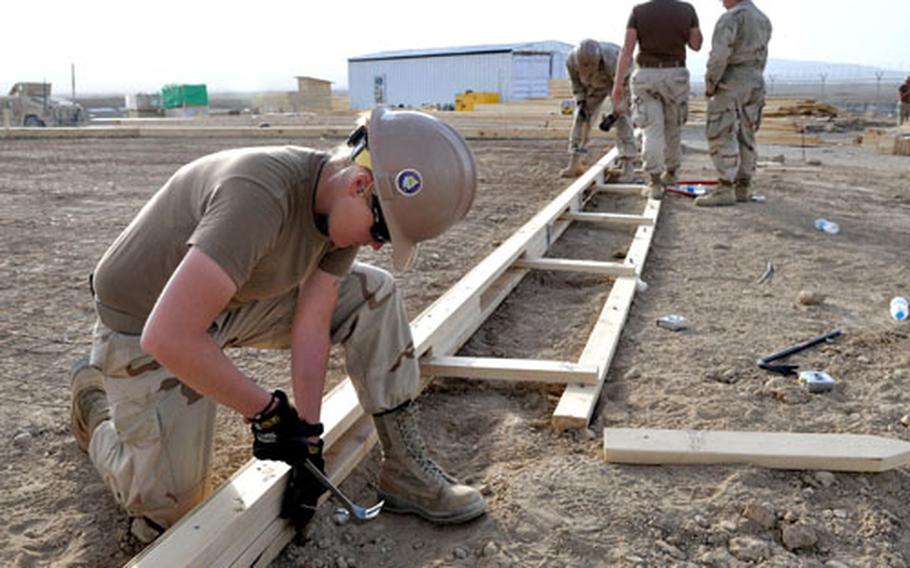 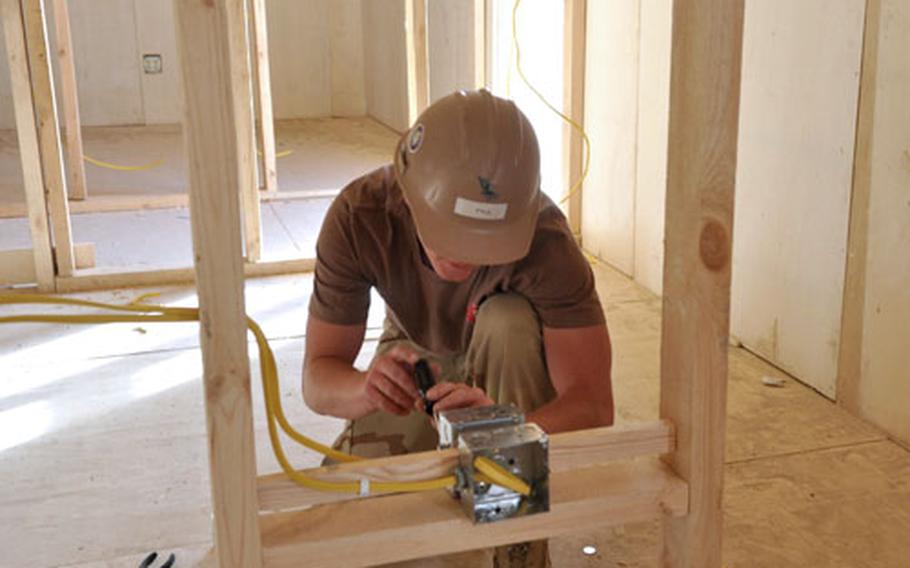 Constructionman McKenzie Dupons, 20, a Navy Seabee, carries dirt to fill in the frame for a concrete floor where she works at the construction site at Forward Operating Base Sharana. (Dianna Cahn / S&S)

FORWARD OPERATING BASE SHARANA, Afghanistan &#8212; Two months before they were set to deploy to Japan, Petty Officer 1st Class Joshua Cooper and the men of the Naval Mobile Construction Battalion 4 got new orders: You are going to Afghanistan. You leave in two weeks.

That was in December, following President Barack Obama&#8217;s Dec. 1 announcement authorizing 30,000 extra troops for Afghanistan to help turn the tide against a growing insurgency.

The extra troops were coming in to fight the war and help government forces establish control. But first, engineers and Navy Seabees would have to make sure all these added forces would have somewhere to sleep, eat and shower.

&#8220;They got word that because of the surge, they need extra Seabees battalions &#8212; an extra 1,200 hammer-swingers to make places for the 30,000 new troops to live,&#8221; said Cooper, a project supervisor at Sharana, which is experiencing the largest base expansion in eastern Afghanistan. &#8220;We deployed 1&#189; months early and instead of doing a six-month deployment in the Pacific, we are doing eight months in Afghanistan. The guys took it pretty much in stride.&#8221;

Now, hammers are swinging, construction machinery is churning dirt and FOB Sharana &#8212; currently a 4,000-man engineering base under the control of the Army Reserve&#8217;s 372nd Engineer Brigade &#8212; is seeing new tent &#8220;neighborhoods&#8221; and buildings sprout up almost overnight.

Sharana is ideally suited to grow into a logistics and air hub for the region: It already has a C-130 airstrip and, surrounded by flatlands, room for a planned C-17 runway. It is expected to triple in capacity by the end of the year.

In Regional Command-East, FOB Sharana will be second in size only to Bagram Air Field, where a constant flow of aircraft and troops has made that base a bustling city with an industrial, garrison feel.

In addition to expanding its own base at Sharana, the 372nd is also in charge of projects at 75 bases and outposts in RC-East, including a major expansion at Forward Operating Base Shank in Wardak province, small projects for a single platoon and building new outposts.

This kind of quick, widespread growth takes manpower and a coordinated effort, so the 372nd Engineers are increasing in numbers, too.

&#8220;We have so many soldiers going into new places ... and we have to figure out how they are going to live and survive, get fed, fueled and watered,&#8221; said Col. Whitney Wolf, the brigade&#8217;s design engineer.

Sharana was set to expand even before the surge was announced. The base had been approved for about $130 million in new projects, including the C-17 runway, a helicopter landing zone, a power grid, a fuel depot and an ammunition storage depot, Wolf said. An additional $30 million will be spent for the expansion of Sharana related directly to the surge of troops.