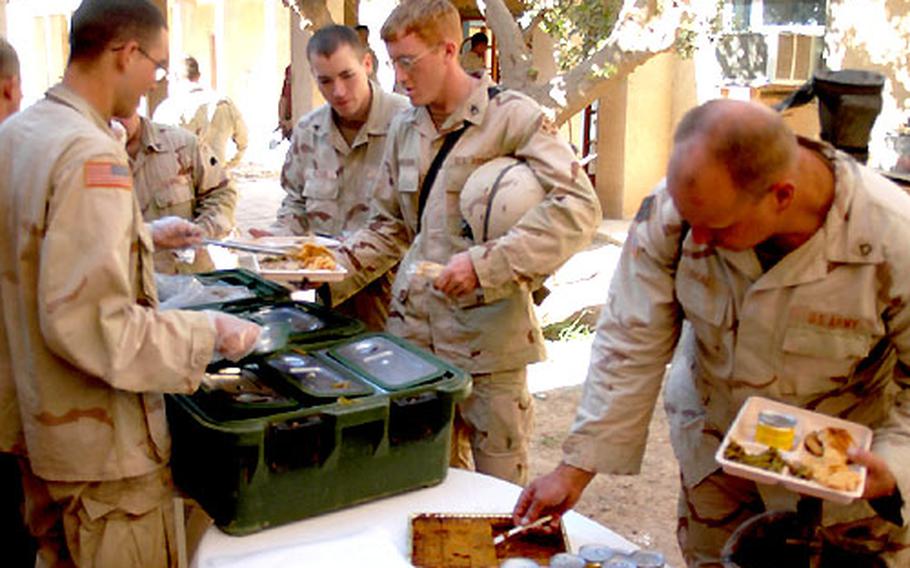 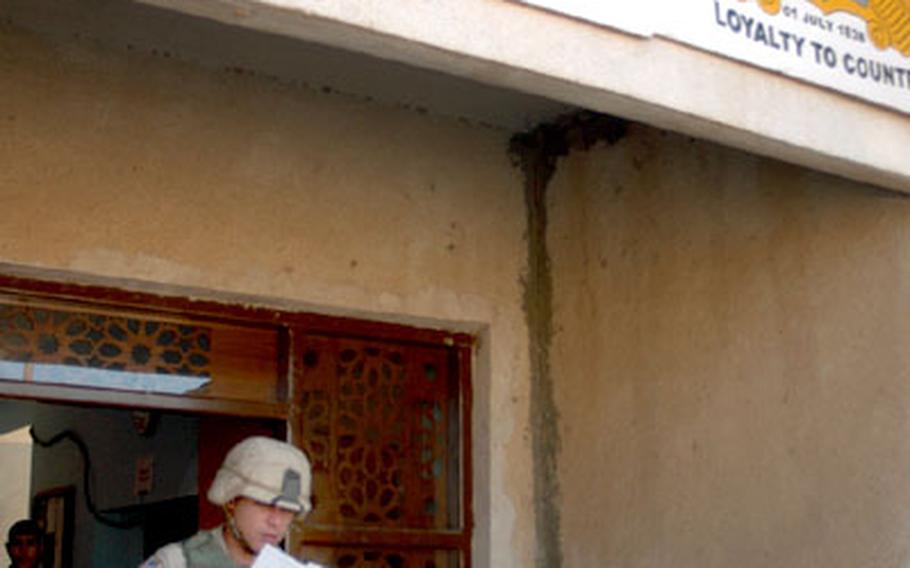 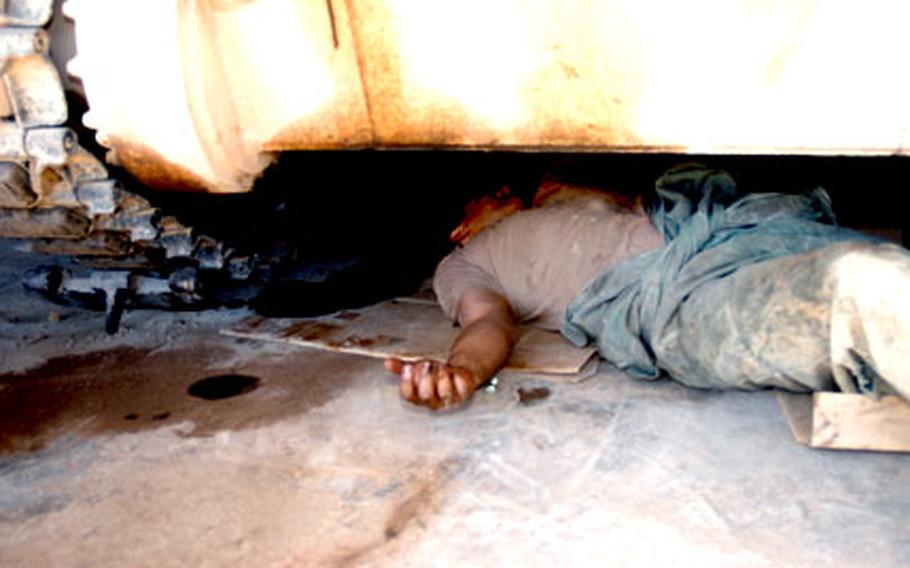 Spc. Carlos Lopez works beneath a Bradley fighting vehicle at Forward Operating Base Eagle in Iraq. The base near Balad is home to the 1st Battalion, 8th Infantry Regiment of the 3rd Brigade Combat Team, part of the 4th Infantry Division. (Ron Jensen / S&S)

An earthen berm traces the 1&#189;-mile perimeter. Outside it runs a woven wire fence topped by barbed wire. Beyond that, a ring of concertina wire encircles the entire base.

The base is home to more than 300 members of the 1st Battalion, 8th Infantry Regiment, part of the 4th Infantry Division&#8217;s 3rd Brigade Combat Team, including the tactical operations center and Company A, also known as Attack Company.

From the base, the soldiers do their best to bring peace and democracy to their portion of Iraq&#8217;s Sunni Triangle, an area where support of Saddam Hussein is common.

The base is near Balad, a town of Shiite Muslims who mostly embrace the U.S. presence. The rural area is mostly Sunni, Saddam&#8217;s sect, and they, for the most part, would prefer that the Americans return to America.

The 3rd BCT has a difficult mission. For one thing, it has nine forward operating bases spread across 1,500 square miles of Iraq north of Baghdad, from Samarra to Taji.

With people spread across such a large area, he said, there are some strains on resupply and communication.

Lt. Col. Paul Welsch, the team&#8217;s executive officer, also at LSA Anaconda, said some problems are mitigated because, unlike other combat teams in Iraq, the 3rd BCT&#8217;s units all make their homes at Fort Carson, Colo.

The combat team left Colorado on April 3 and has been in Iraq since April 17. It moved up the Tigris River to Kirkuk, where it expected to remain. But it was moved to the Samarra region in late June and has settled there, although the 1st Battalion, 12th Infantry Regiment still hangs its helmet in Kirkuk.

No matter where they are, troops face difficult roles. The same people who are asked to rout out bad guys are asked to install town councils and bring electrical plants on line.

Troops must conduct raids when intelligence uncovers a tip about the bad guys, but must also make friends with sheiks and imams who wield power and influence. It is a two-sided coin. A smile and a grimace on the same face. With one hand, a handshake; with the other, a fist.

To those who say America&#8217;s Army is not trained for this type of nation building, Welsch says they have been trained for it almost since birth, since they first learned the Pledge of Allegiance and studied 1776, Paul Revere and Bunker Hill.

There is something basic about people managing their own lives, and U.S. troops understand that, he said.

Maj. Robert Gwinner, executive officer for 1st Battalion at FOB Eagle, was in a rush one recent day to get to a district council meeting in Balad, where the battalion had recently organized an election for town council. A woman was elected to the 12-member council, which is a rare feat in this part of the globe.

He noted that $1.5 million had been spent in the area on schools, fire departments and hospitals &#8212; another sign of progress.

The base was once ground zero for mortar attacks on a regular basis, but now a week may pass with no incoming rounds at FOB Eagle. One reason may be the aggressive nature of the response to any attack.

Gwinner said a mortar launch is met with a howitzer round.

When the enemy fired from the back yards of homes, which artillery can&#8217;t target, the soldiers searched every house in the neighborhood and detained all the men. Once, when the bad guys used an orchard as cover to fire at the base, the battalion bulldozed the orchard.

Welsch said, &#8220;We want to react to every action because we want them to see there is a cost to their attacks on coalition forces and Iraqis.&#8221;

The soldiers, too, operate &#8220;mortar deterrence patrols,&#8221; said Capt. Chuck Adams of Company A. These patrols create a presence outside the base perimeter in areas where mortars might be deployed.

Soldiers leave the camp for a multitude of other reasons.

They might take their armored Bradley fighting vehicles out to help a U.S. convoy or patrol that has come under fire. They might be asked to help Iraqi police handle a situation. Or they could be sent out just to show themselves, reassuring the friendly locals and threatening the unfriendly ones.

Whatever the reason, there is danger, and the soldiers of Company A have been here long enough to witness an evolution in the enemy&#8217;s tactics.

At first, the insurgents would attack with rocket-propelled grenades accompanied by small-arms fire. That, Dykstra said, was &#8220;notoriously ineffective&#8221; for the enemy. Such man-to-man encounters with the Bradleys and Company A usually ended badly for the attackers.

So the soldiers have had to deal with a larger number of hit-and-run RPG attacks and improvised explosive devices.

Despite the danger, however, the troops would rather leave the security of FOB Eagle than stay inside for monotonous hours of guard duty, laundry and the snail&#8217;s pace of downtime.

&#8220;Actually getting outside the wire and actually doing their job helps morale,&#8221; Dykstra said.

It is not unusual for a platoon to leave the gate several times a day. That means the busiest place on FOB Eagle might be the motor pool where the Bradleys are maintained.

They are racking up a year&#8217;s worth of mileage in just a couple of months.

Whenever the patrols roll out, a medic goes along. Always. It is standard operating procedure.

Sgt. Delroy Henry, another medic, said the patrols have been mercifully free of U.S. casualties.

He said he has had to treat several Iraqis wounded in encounters with Company A.

On base, the injuries and illnesses are the responsibility of Maj. Wayne Slicton, a physician&#8217;s assistant. Slicton, a veteran of Vietnam and Operation Desert Storm, had put in for his retirement when the war started.

&#8220;I rescinded my retirement and came over with these guys,&#8221; said the 55-year-old soldier who left the service after the Vietnam War but returned to uniform.

He calls this his &#8220;swan song&#8221; and plans to shed his uniform for good when he returns from Iraq. It is a good mission on which to quit, he said. Here, he said, he knows he has made a difference.

When a mortar landed on the base on Sept. 28, a soldier was badly wounded. Slicton treated him and got him on board a helicopter for evacuation to a combat support hospital.

Soldiers live mostly in hard buildings. Plans are to move them into smaller, portable cabins with four soldiers to each one, an improvement on the crowded quarters now being used.

The TOC &#8212; tactical operations center &#8212; is a looted schoolhouse cleaned up by the Americans.

One hot meal a day is delivered to the troops. A basketball court is in the works. Satellite television and table tennis are popular time-killers.

There is a communal, informal feel to the place where just about everybody knows everybody else.

But the mission is serious and, according to the boss, it is being done successfully.

&#8220;If we had taken time-lapse photography [on a street] since our arrival, it would be incredible,&#8221; Rudesheim said.

The surly men who greeted the soldiers with mean glares have been replaced by shoppers and vendors, women and children. The hustle of commerce, the bustle of normalcy would be the latest snapshots.

Rudesheim pointed out that water and electrical services have been restored and schools have opened. He said the insurgency will die as the progress continues and as the Iraqis come to believe America is resolved to stay and finish the job.

Iraqis don&#8217;t like having a foreign force in their land, but they are also concerned about their personal safety, Rudesheim believes. They will climb down from the fence on the side of the American idea of reform when they no longer fear the people who attack the bases, convoys and Iraqi targets such as police stations.

But they will lose not because of American weapons or tactics, but because the people of Iraq want to lead normal lives free of the fear the terrorists cause them, he believes.

That basis of support dwindles each time a school opens, a hospital is repaired or a town council is elected to represent the people, he said.