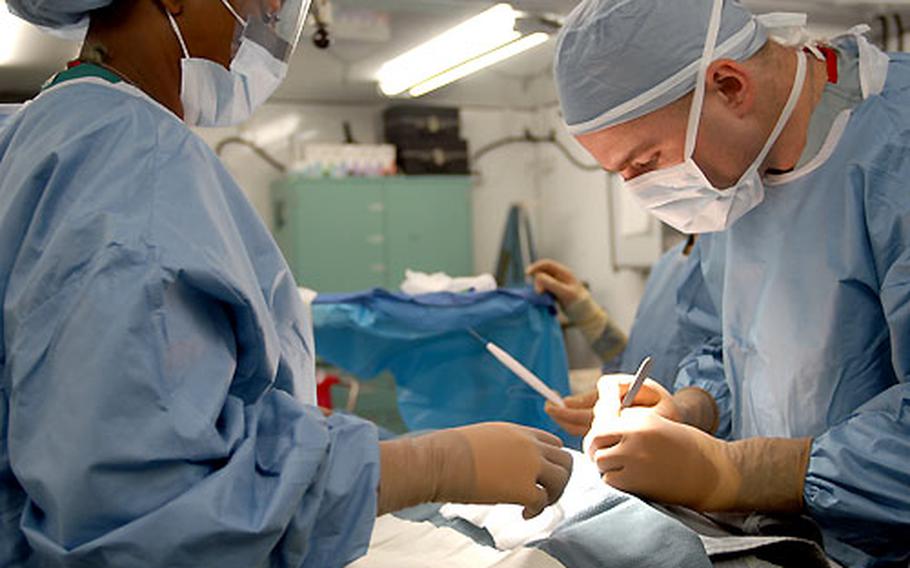 SOUTH KOREA &#8212; Sgt. 1st Class David Justice was in a pretty jocular mood Sunday considering his position: lying on a gurney waiting to go into a operating room.

Believe it or not, it was his choice. Justice, a soldier with the Special Operations command at Yongsan Garrison, volunteered for a live surgery exercise.

He was one of seven patients scheduled for surgery, ranging from fixing scars to removing benign lumps. Although the surgeries are minor, it allowed soldiers to practice how a real field hospital would work during wartime, said Maj. Barbara Sion, an operating room staff nurse at the 121st Hospital at Yongsan Garrison.

Normally, the hospital is stored in tall metal boxes, ready to be deployed, Wilson said. When the tents are built, it becomes a relative model of any emergency room, with radiology, intensive care and operating rooms.

Military officials requested that the mobile hospital&#8217;s location not be identified.

During war, the 121st Hospital staff would split into two sections to manage both facilities. Reservists with medical specialties would stream into the peninsula to fill the facilities, Wilson said.

Plenty of reservists and active duty soldiers from stateside bases were on hand practicing their skills. &#8220;The thing we don&#8217;t see everyday are the high caliber weaponry,&#8221; said Col. Frank Robinson, who started his career as a Navy Corpsman in 1972.

Robinson is a physician reservist from Sacramento, Calif., who practices emergency medicine at Methodist Hospital.

Wartime injuries are different because of the weaponry, said Robinson, but the end result &#8212; blunt trauma, major fractures and head injuries &#8212; are the same as in civilian hospitals. When patients are dropped off by helicopter, they&#8217;re taken to a waiting bay where they are sorted by injury.

At full capacity, the two operating rooms could accommodate two patients each, Sion said. On Sunday, medical personnel practiced on one patient in each room, as it was less hectic, but that would change during war, she said.