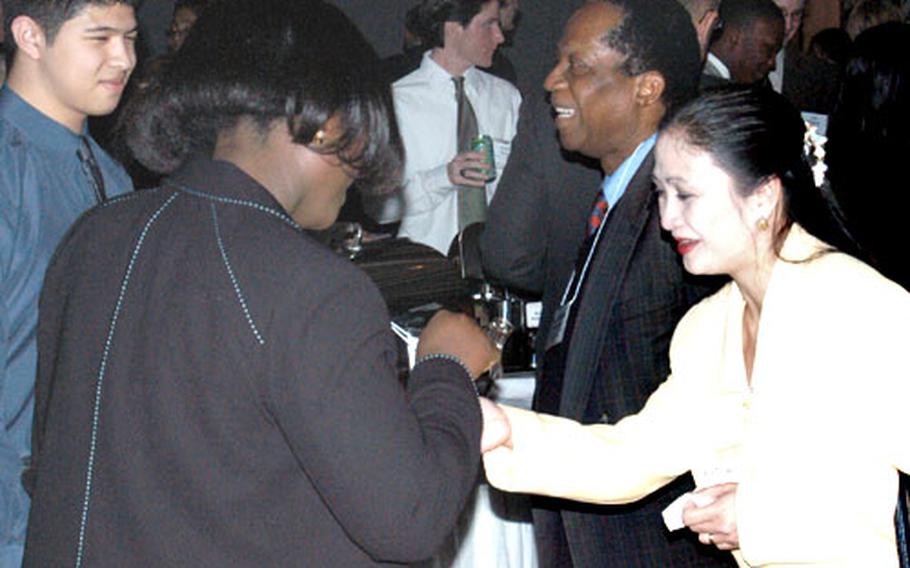 Joining students participating in the conference at the reception were the chaperones and teachers who accompanied them, and members of the diplomatic corps, including Necie Tanner, right, a chaperone from Osan; Raphel Mwende from the Embassy of the Democratic Republic of Congo; and Akosua Okyere-Badoo (back to camera), first secreatary of the Embassy of Ghana. (Juliana Gittler / S&S)

TOKYO &#8212; U.S. government policies look a little different through the eyes of a French diplomat than through those of a Yokosuka high school student.

This week, Department of Defense Dependents Schools students will learn to appreciate those differences as they seek global compromise in the Far East Model United Nations Conference.

Each school sends delegations that assume the role of a different country; DODDS students represent 15 nations, from North Korea to Brazil.

The event aims at teaching the students to construct a logical argument and to counter other nations&#8217; arguments. Using a foreign perspective helps hone their logic and remove opinion and emotion, organizers said.

The students also learn that there really are no victories in diplomacy.

The delegations break into committees for the conference then are to reconvene at the end for a General Assembly meeting.

Committee members must reach an acceptable agreement on issues, then persuade their own delegations to accept those agreements. On Thursday, the full assembly meets to try to finalize the deals made.

As in real life, nations can agree on issues or disagree, but agree to keep the issue in consideration for the future. And as in real life, a list of topics is being considered &#8212; including terrorism, sustainable development and literacy &#8212; that echo what might be found in the world&#8217;s newspaper headlines.

Students 14 to 18 years of age can join the Model United Nations through classes or extracurricular clubs at schools.

Here are the countries that DODDS students will represent at the Far East Model United Nations Conference: