At Expo, a look at the latest gear 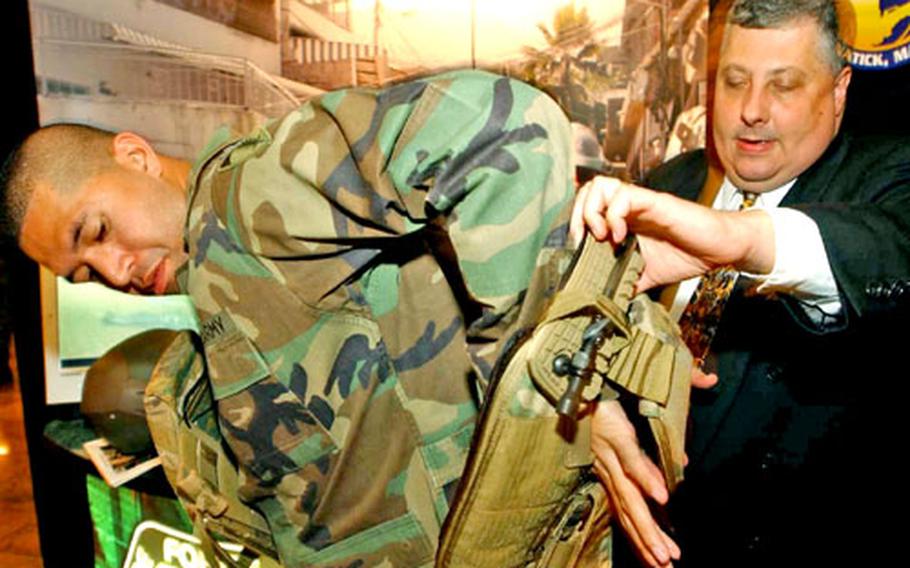 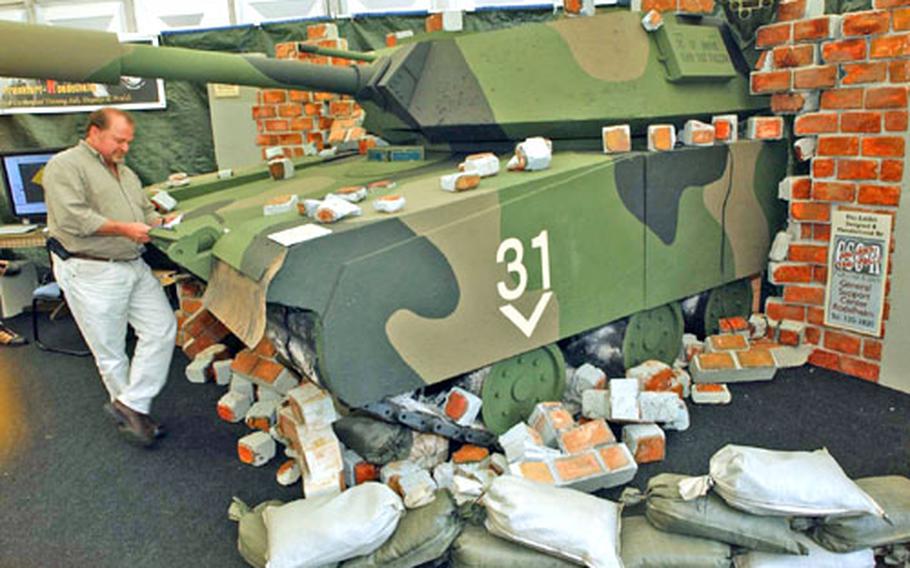 John Krollpfeiffer stands by a tank model that he and his staff from the Production Branch, General Support Center-Rodelheim, created. (Raymond T. Conway / S&S) 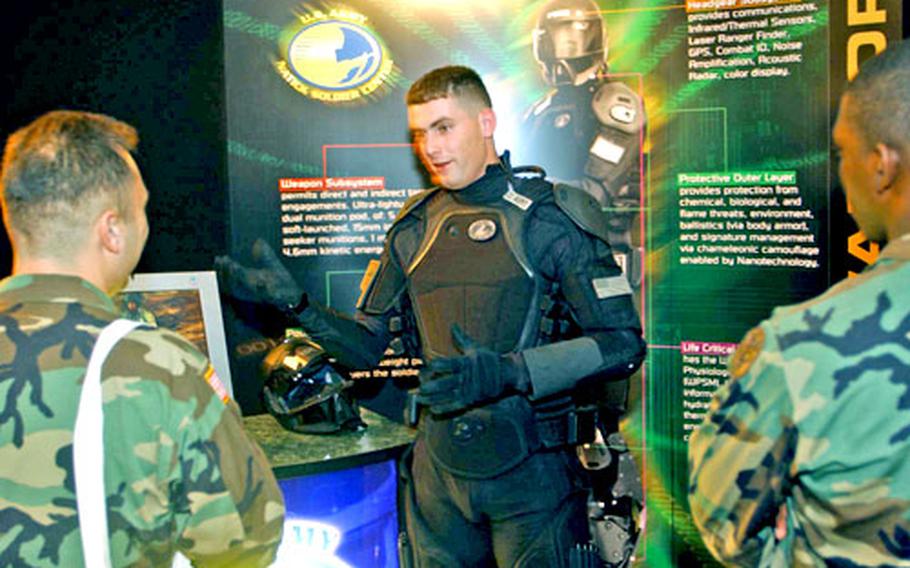 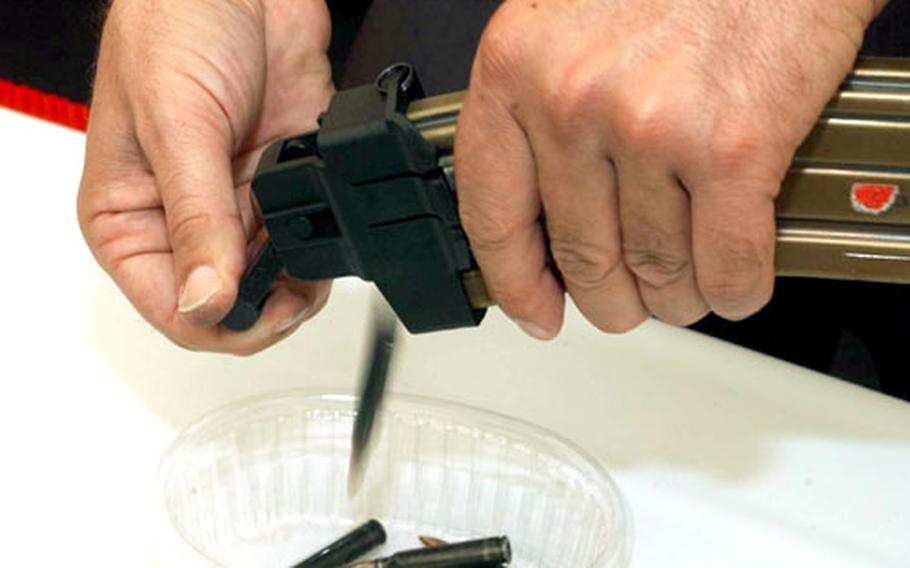 Guy Tal demonstrates the quick loading and unloading capability of a magazine loader made by Maglula Ltd. and used by the Israeli Defense Force. (Raymond T. Conway / S&S) 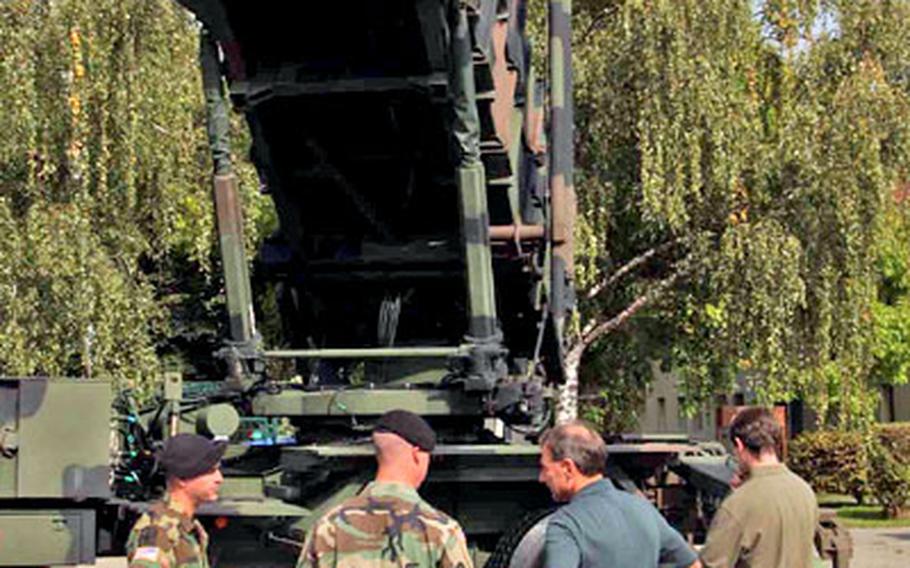 &#8220;It would be nice for the guys downrange to have some of this stuff now so they&#8217;d have a little more of an advantage than we did,&#8221; said Pfc. Harry Reed, fresh off a 15-month deployment in Iraq, as he checked out the new gear on display Tuesday at the Land Combat Expo 2004.

The expo, which runs through Thursday at the Village Pavilion at Patrick Henry Village in Heidelberg, features dozens of booths with futuristic uniforms, the latest ideas on Meals, Ready to Eat and other things needed by soldiers on the battlefield.

There are also panels of troops discussing the latest news in the business of warfighting and presentations by experts. Military personnel and other Department of Defense identification card holders and guests are able to attend.

Reed, of Catawissa, Mo., and Headquarters Battery, 2nd Battalion, 3rd Field Artillery Regiment, made the trip from Baumholder with other soldiers from the 1st Artillery Division.

Spc. Eric Speck of Marysville, Pa., and the 2-3, said that soldiers discover what they need when they&#8217;re downrange, doing their work in real-life situations.

Uniforms of the future were being displayed by the U.S. Army Soldier Center of Natick, Mass.

Pants to be worn in the field for days at a time have zippers in the seat and up the legs so soldiers will be able to wash themselves more easily. Back pockets will be located at the upper hamstring so they are easier to reach.

Boots would fit like sneakers but grip better, protect as well as the current boots and repel water and mud.

Helmets will have a combined infrared and night-vision scope, microphones inside the headband for increased hearing, and a Styrofoam interior and redesigned exterior for better protection.

They will be a little lighter and a little smaller, and they will be hooked up to a small computer that a soldier carries to make it all work.

The uniform is expected to be ready around 2007, the helmet around 2012, according to the soldier center&#8217;s Dan Harshman.

&#8220;The overall goal is for every soldier to become a node on this digital battlefield,&#8221; Harshman said. &#8220;So [commanders] can not only see, but digitally see, where every soldier, every fast-moving vehicle or aircraft is located.&#8221;

Operations Desert Storm and Desert Shield resulted in a flood of feedback about the MREs that troops use to sustain themselves, according to Diane M. Wood, who is in charge of the soldier center&#8217;s &#8220;combat feeding&#8221; office.

A current three-pack of MREs that weighs 7&#189; pounds gets field-stripped; that is, troops get rid of some items and trade others, Wood said.