A KC-135 Stratotanker from Kadena Air Base, Japan, lands at Eielson Air Force Base, Alaska, on Oct. 7 after an area familiarization flight in preparation for exercise Cope Thunder 06-1. (Joshua Strang / U.S. Air Force)

A KC-135 Stratotanker from Kadena Air Base, Japan, lands at Eielson Air Force Base, Alaska, on Oct. 7 after an area familiarization flight in preparation for exercise Cope Thunder 06-1. (Joshua Strang / U.S. Air Force) 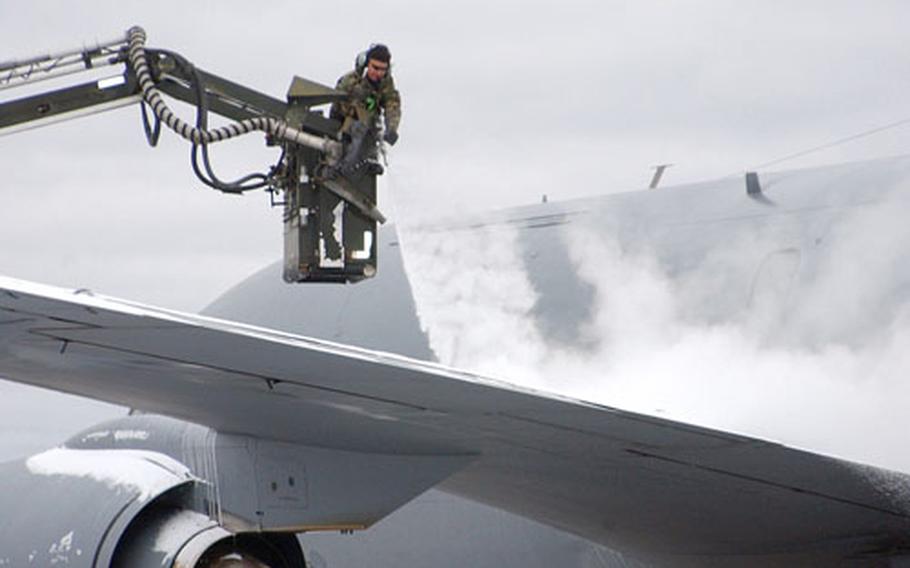 An airman de-ices a KC-135 Stratotanker from Kadena Air Base, Japan, before it takes off Monday from Eielson on its first Cope Thunder mission. (A.C. Eggman / U.S. Air Force)

More than 1,000 airmen and 87 aircraft are gathered at Eielson Air Force Base, Alaska, this month to practice what Air Force officials say is one of the most realistic training operations available to pilots.

Cope Thunder, which occurs about two times a year, is the largest combat training exercise in the region. Pacific Air Forces units and others from around the States participate.

&#8220;The pilots are flying simulated combat missions over tundra, rolling hills and 13,000-foot mountain ranges, dropping [weapons] on realistic targets located on live-impact areas, and all the while they have to remain aware of the surface-to-air missile and anti-aircraft artillery simulators as well as the opposing red air forces,&#8221; said Lt. Col. Eddie Osteen, the 353rd Combat Training Squadron director of operations, in a written statement. &#8220;(The exercise is) one of the most realistic and valuable learning opportunities many military pilots will ever encounter.&#8221;

The exercise began in 1976 but was expanded to its current format in the aftermath of Operation Desert Storm, when Air Force leaders found pilots lacked combat experience, according to the 353rd Combat Training Squadron, which is responsible for the training.

Studies showed that most combat losses occurred during a pilot&#8217;s first eight to 10 combat missions. So Cope Thunder was designed to give them the equivalent training.

The exercise started at Clark Air Base in the Philippines and moved to Alaska after the base closed in 1992.

The exercise began last Friday and runs through Oct. 21 at the Pacific Alaskan Range Complex, the largest training range in the country with a 90,000-acre range with 62,000 square miles of airspace and three impact areas. Missions run from Eielson and nearby Elmendorf Air Force Base.

&#8220;Cope Thunder provides aircrews an outstanding opportunity to take advantage of the (range complex) capabilities,&#8221; Osteen stated in the release. &#8220;We expose them to large-force employment scenarios as well as missions tailored to what they may likely see during deployment.&#8221;