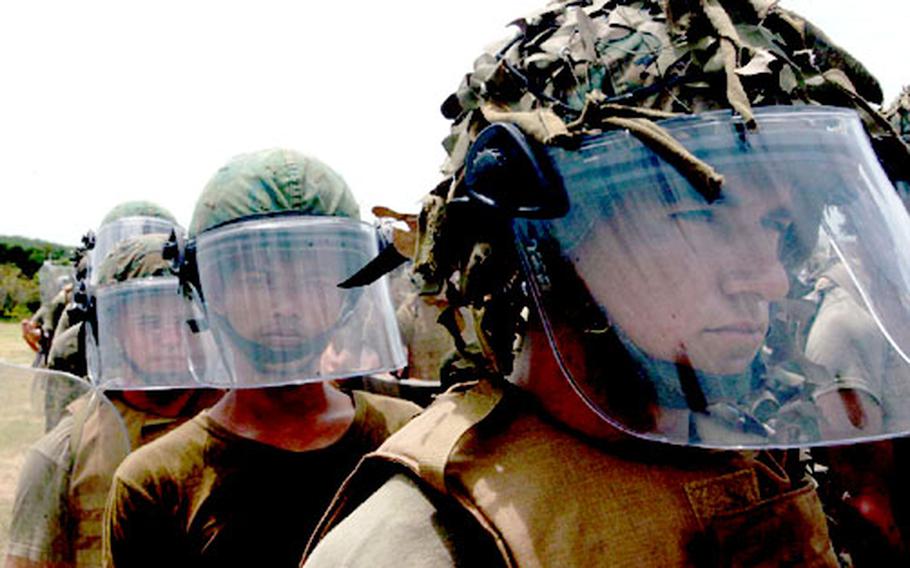 “Rioters” attack a U.S.-Thai combined Marine patrol as part of crowd-control training. “The goal is to try to get them to disperse,” said Gunnery Sgt. Kenneth Kurre, an instructor for the 3rd Marine Expeditionary Force based on Okinawa. (Juliana Gittler / S&S) U.S. Marines and their Thai counterparts subdue a rioter as part of nonlethal-control training Monday during the annual Cobra Gold exercise in Thailand. (Juliana Gittler / S&S) Armed with batons and shields, U.S. and Thai Marines faced off against an angry, unruly and violent mob.

Rioters threw stones and dragged some of the Marines into the crowd while chanting, cheering, blowing horns in a deafening melee and screaming, &#8220;Go home, leave us alone!&#8221; But the Marines quelled the crowd during Monday&#8217;s exercise.

&#8220;The goal is to try to get them to disperse,&#8221; said Gunnery Sgt. Kenneth Kurre, an instructor for the 3rd Marine Expeditionary Force, special operations training group, based on Okinawa.

Kurre is senior instructor for MOOTW, or military operations other than warfare. He&#8217;s also a nonlethal-weapons instructor.

The Marines learned to identify pressure points and to strike a baton in the least-damaging places. But they also learned that sometimes, if a situation veers toward the deadly, lethal force may be necessary.

But in the heat of a riot, losing control is easy, Kurre said. That&#8217;s where good training, practice and restraint come in.

&#8220;The most difficult thing is to control your emotions,&#8221; said trainer Sgt. Mark Massalski.

Private 1st Class Richard Near &#8212; deployed to Okinawa from the 1st Battalion, 3rd Marines of Kaneohe Bay, Hawaii &#8212; was learning nonlethal tactics for the first time.

The difficult part, he said, is reminding yourself that your job is keeping those attacking you safe from harm &#8212; especially when they&#8217;re throwing hard objects at you.

During the training, Marines were pelted with rocks. In a real riot, Kurre said, it more likely would be bricks, cinder blocks and Molotov cocktails.

The training can be useful whenever a crowd&#8217;s size and mood threatens to veer toward violence &#8212; at protests, for instance, or feeding centers in places threatened by famine as they emerge from war.

To break up the crowd, Marines are taught to move forward slowly, in formation, sending in &#8220;snatch teams&#8221; to surround and grab anyone who is down. Such people are pulled into the formation, where they&#8217;re either helped or handed over to authorities.

Marines undergoing the training also received a post-&#8220;riot&#8221; assessment. For instance, some had been dragged into the crowd because they&#8217;d fought to hold on to their shields. They were reminded to give up anything a protester fights for.

He reminded them that slamming the sharp end of the shield down on a protester&#8217;s hands might convince the demonstrator to let go.

The baton, for instance, can incapacitate but also serves to intimidate. That, Kurre said, might be all the force necessary.

Marines are taught to not use the baton on heads, sternums or spines, which can kill, but rather on the body&#8217;s muscled areas. If using enough force to kill is required, Marines should switch to weapons, instructors said.

The practice riot was meant to be a worst-case scenario, they said.

&#8220;We tried to throw the extreme at them,&#8221; Massalski said, on the theory that handling that better prepares them for the real world.

Marines are trained to respond to the target &#8212; to use less force for children than adults, for example, Kurre said.