At CARAT, American and Filipino divers practice with hard-hat rig 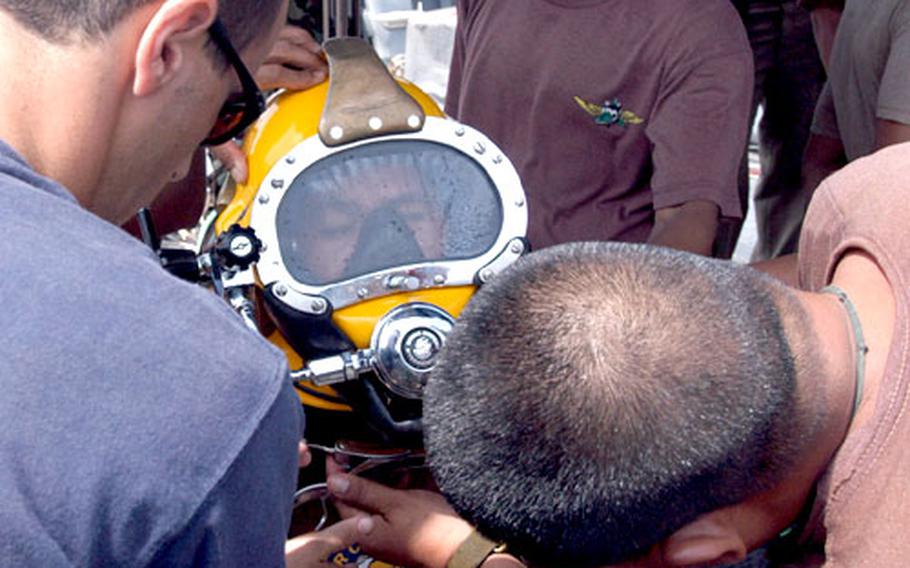 Dive tenders get a Philippine diver ready for the Mark 21 hard-hat dive rig, a U.S. Navy system aboard the USS Safeguard that allows longer dives by providing a ship-based air feed, as opposed to a self-contained breathing system. (Juliana Gittler / S&S)

Dive tenders get a Philippine diver ready for the Mark 21 hard-hat dive rig, a U.S. Navy system aboard the USS Safeguard that allows longer dives by providing a ship-based air feed, as opposed to a self-contained breathing system. (Juliana Gittler / S&S) 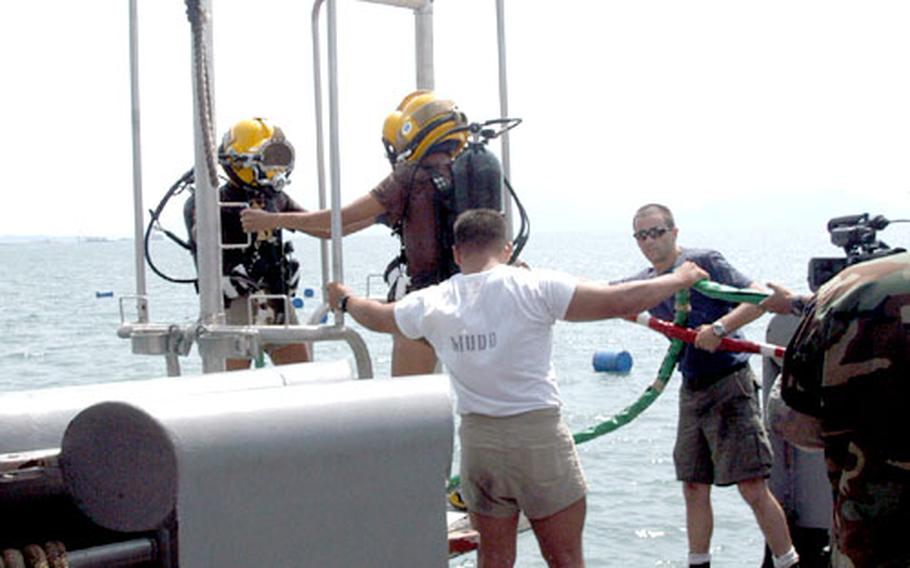 SUBIC BAY, Philippines &#8212; A handful of Philippine Seabees and explosive ordnance disposal divers donned hefty yellow helmets and plunged off the side of the USS Safeguard into the murky waters below.

The 20-minute submersion served as familiarization to the Mark 21 hard-hat rig before the Philippine sailors joined U.S. Navy divers from the salvage ship in using the surface supply system.

The drill, part of Cooperation Afloat Readiness and Training, introduced the new divers to the system and provided U.S. divers experience toward qualification as dive supervisors.

The U.S. Navy has used the Mark 21 with most of the countries that participated in CARAT this year. The system submerges divers and their equipment inside a platform, allowing them more time underwater since air is supplied via a hose from the ship and enabling the diver to maintain communication during the entire exercise. It allows divers to make longer, deeper dives to fix hulls or salvage sunken ships.

The groups also will practice regular scuba dives during the training at sea.

One of the exercise highlights involves a large yellow box affectionately called &#8220;The Mud Monster,&#8221; which is submerged and then raised to simulate refloating a sunken ship, Morin said. It may be smaller than a real ship, but the mechanics of lifting it are the same. It ascends from the depths with a muddy, bubbly flourish.

The dives are some of the most hands-on and integrated training done during CARAT. In other CARAT phases, U.S. sailors accompanied host-nation sailors into the recompression chamber to experience being locked into it until the body adjusts to normal atmospheric pressures.

The different CARAT segments offer a variety of opportunities, said Lt. j.g. Chuck Cornely, the Safeguard&#8217;s operations officer, who worked with each country over the past year to plan out specific training.

In Malaysia, the diving was in deep water so the teams made real use of the Safeguard&#8217;s recompression chamber, he said. The Malaysian navy also sank a sport utility vehicle to give divers something to refloat.

The training components aren&#8217;t just about jumping into the water. For the hard-hat dive, each of the complex emergency checks is carefully executed, giving Philippine sailors a chance to help the divers prepare.

After piling on all the equipment with help from dive tenders, divers hobble onto the platform &#8220;stage,&#8221; where handlers help lower them into the water. They stand submerged on the stage for 15 to 20 minutes before resurfacing.

It may require arduous preparations, Cornely said, but the lengthy Mark 21 dives are some of the most difficult and most useful for navies &#8212; and the most fun.