At Camp Normandy, NCO training in a universal language 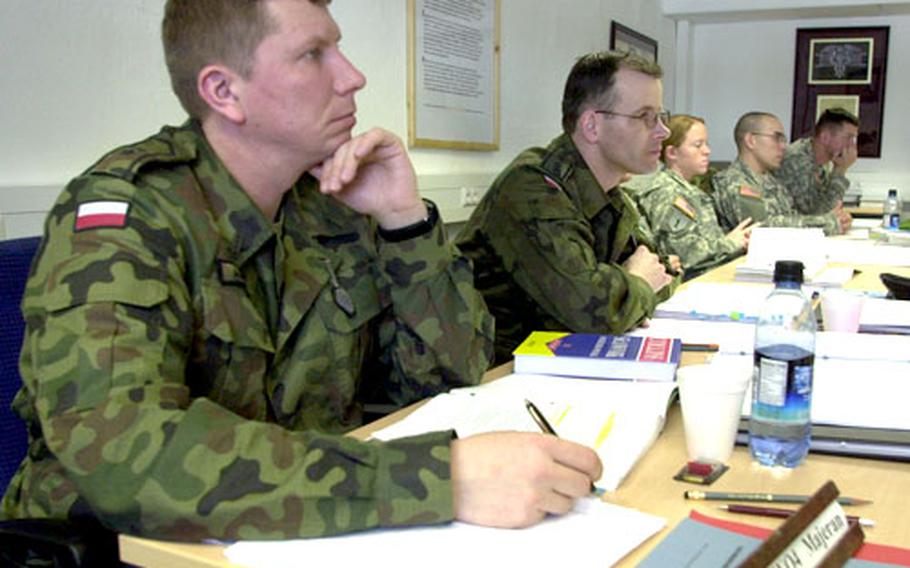 Twenty Polish and four Slovenian NCOs are going through the Warrior Leaders Course alongside dozens of U.S. soldiers.

For American NCOs, the course teaches how to lead a squad of soldiers in a tactical environment. It is also a prerequisite for promotion to staff sergeant.

For the foreign troops it is a chance to interact with U.S. soldiers and learn different ways of doing things, according to the academy&#8217;s Company A first sergeant, Terry Sykes.

The foreign students, whose ranks range from corporal to sergeant major, arrived at Camp Normandy four days before the 31-day course started on March 15 to learn American-style marching and physical training routines, receive U.S. gear, get familiar with U.S. weapons and learn about the academy&#8217;s guidelines, said Sykes, 37, of El Reno, Okla.

When the U.S. soldiers arrived, they were divided into classes, each with about nine soldiers including one or two of the foreign students. To overcome the language barrier, five Poles and a Slovenian assistant instructor helped out.

The classes have been held since 2004, with 120 Poles, 12 Russian, 16 Slovenians and eight Albanians attending the course so far.

The foreign troops are excellent soldiers, Sykes said. For example, one Polish graduate of a former class is now commandant of a Polish NCO academy modeled on the U.S. school. And the top Polish student in that class is now sergeant major of the Polish army, he said.

The Joint Multinational Training Command officials turned down a request to interview the foreign students, saying that Polish or Slovenian public affairs officials had not been consulted. However, Sykes said the foreign troops&#8217; favorite foods were American fast food such as Popeye&#8217;s chicken and Taco Bell.

One of the U.S. students in the course, Sgt. Joseph Lugo, 33, of Bronx, N.Y., swapped unit insignia with a Polish student in his class and plans to swap berets with him after the course finishes, he said.

Lugo said he was also learning Polish from his classmate, whom the Americans call &#8220;Sgt. Ski&#8221; because his last name is hard to pronounce.

Lugo said he learned that vodka is the Poles&#8217; favorite drink but has yet to share a glass with his new friends because alcohol is forbidden at the academy. But he did get to check out Sgt. Ski&#8217;s Polish Class A uniform, which has its own massive furry hat.

The pair talked about Poland&#8217;s evolution from a communist country to a free democracy, but Lugo said he did not want to speak for Sgt. Ski on that issue, other than to say that he&#8217;s &#8220;really happy they are finally free.&#8221;

Lugo said he plans to continue his relationship with Sgt. Ski after the course ends. The pair plans to stay in touch through e-mail, he said.

&#8220;He keeps a Polish-English dictionary by his desk. He is just as much of a practical joker as any of us. He takes it well and dishes it out well,&#8221; said Arias, who hopes to visit Poland one day.

Sgt. 1st Class Kevin Merriweather, 33, of Crockett, Texas, a senior instructor at the academy, said the foreign visitors impressed him.

Another instructor, Staff Sgt. Sean Gathers, 33, of Santee, S.C., said there was no difference in skills between the foreign students and U.S. soldiers.

Gathers said it was important to build ties with U.S. allies.