At bases in Far East, a chance to send holiday video greetings 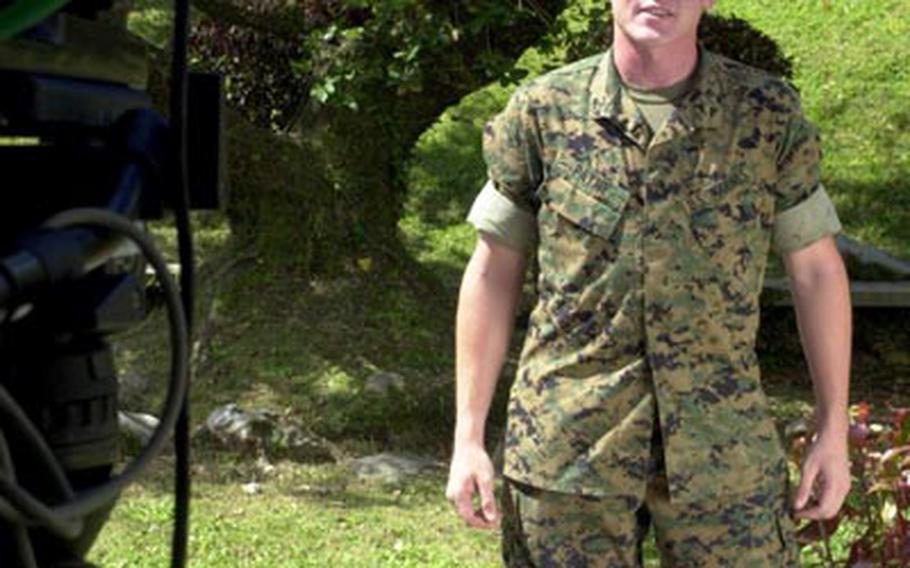 Lance Cpl. Thomas Payne, who works in the Traffic Management Office, records his hometown holiday greeting Monday at the Camp Foster Chapel. A team from the Army and Air Force Hometown News Service is spending 45 days traveling the Pacific to record the messages. (Fred Zimmerman / S&S)

CAMP FOSTER, Okinawa &#8212; Lance Cpl. Thomas Payne was simply following orders from his first-ever commanding officer, his mother: &#8220;I better see you on TV,&#8221; she told him.

Like any good Marine, he followed those orders and showed up at the Camp Foster Chapel on Monday to record a hometown greeting for the holidays. During his 15-second spot, he stated his name and where he was stationed and said hello to his family back in Buford, Ga. He also threw in that the diving was good on Okinawa.

A team from the Army and Air Force Hometown News Service, based in San Antonio, spent the last week on Okinawa recording troops&#8217; holiday messages for loved ones back home. The team is one of four from the service currently spending 45 days in regions throughout the world, according to team chief Kris Grogan.

Grogan&#8217;s team is covering the Pacific, having started in Alaska and Guam before arriving in Okinawa. The team next will head to mainland Japan followed by South Korea.

So far business has been slow, Grogan said. They typically have about 1,500 messages recorded by now, but as of almost noon Monday, they were only at about 850.

When the team wraps up their trip at Yongsan Garrison on Oct. 18, they&#8217;ll head back to San Antonio to edit the greetings, said Grogan. They&#8217;ll then make master tapes, mostly broken down by state, and mail the tapes out to the 2,500 television and 2,200 radio stations they supply.

Grogan said the stations search the tapes for servicemembers from their area.

Those who wish to record a greeting should simply show up at the designated site, Grogan said &#8212; no appointments are necessary.

There, the servicemember must fill out a card telling the team the name and location of the person or people for whom the message is intended. Multiple messages can be recorded for those with family scattered throughout the States.

The messages are available to all active duty, reservists, Defense Department civilians and dependents whose sponsor is deployed. Servicemembers must record their messages in uniform, Grogan said.

After recording his greeting Monday, Payne said he wanted to do it to &#8220;make the holidays easier for my family.&#8221; He said this is the first holiday season he&#8217;ll spend away from home.

All times are from 8 a.m. to 5 p.m. For more information, contact your installation&#8217;s Public Affairs Office.