At Bagram Air Base, a runway in progress 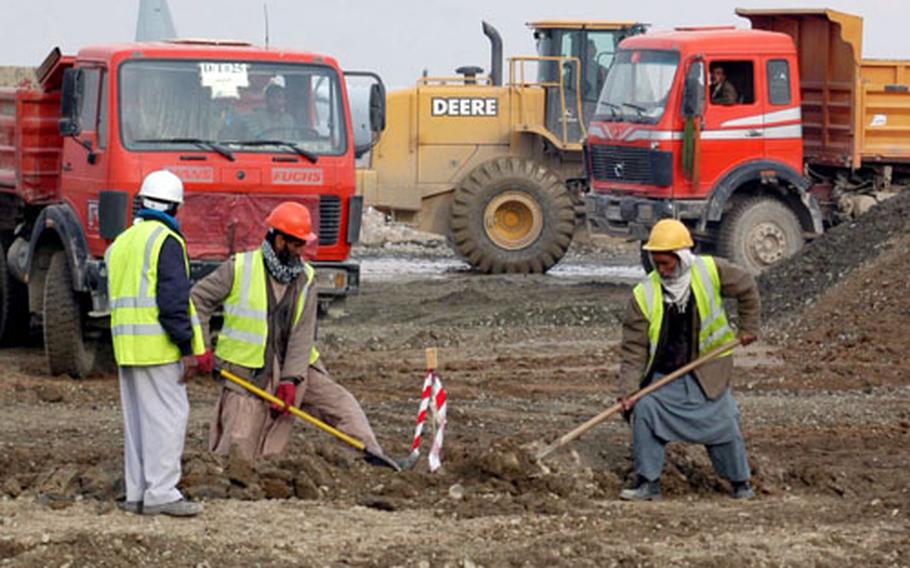 Afghan workers help move dirt as part of the work on a series of projects that will add a second runway and additional ramps to Bagram Air Base in Afghanistan. The new runway should be operational in September, with other parts of the project completed by next spring. (Kent Harris / S&S)

BAGRAM AIR BASE, Afghanistan &#8212; No one is likely to confuse it with Ramstein Air Base anytime soon.

But a series of projects under way &#8212; and others in the planning stages &#8212; are transforming this former Soviet complex into something more akin to what most airmen would think of when they hear the word &#8220;base.&#8221;

&#8220;It&#8217;s always going to be a rather expeditionary type of place,&#8221; said Col. Paul Johnson, commander of the 455th Expeditionary Operations Group. But a new runway is under construction along with several ramps to facilitate more aircraft, both fixed-wing and rotary. Funding for a substantially larger control tower and other projects has been approved, making it appear that Bagram&#8217;s going to be around for a while.

Air Force C-130s have joined A-10s in calling Bagram home. C-17s routinely fly in and out. Dozens of Army helicopters are based at Bagram. Other American aircraft &#8212; some of which the military doesn&#8217;t like to talk about &#8212; are either temporarily at Bagram or make stops.

But Johnson said all that traffic is a challenge on the current runway, which is essentially falling apart.

Johnson declined to talk about any specific aircraft that might be limited by current conditions at Bagram, but acknowledged: &#8220;We have aircraft that we can&#8217;t bring in on a regular basis.&#8221;

Maj. Gregory Keysor, a project manager for Central Command&#8217;s construction management office, said the $55.1 million runway project has had a setback or two.

&#8220;Unfortunately, we&#8217;re significantly behind schedule,&#8221; he said. The runway itself was supposed to be almost finished by now, but is a bit less than 40 percent complete.

That&#8217;s mainly due, he said, to a subcontractor losing its license to clear land mines. Parts of Bagram are inundated with Soviet-era mines and they have to be cleared before any kind of construction can begin.

As it stands now, the 11,800-foot runway should be operational in September, with ramps for parking, lights and access ways all completed by February 2007.

Johnson said once the new runway opens, the current one will probably no longer be used. Those plans could change, but that would require a significant amount of money and work.

Other plans that have already been approved include a six-story control tower (twice as tall as the current one) on the other side of the runway.

Keysor said the $5.2 million structure, part of the fiscal 2005 military construction program, is supposed to be operational in May 2007. An $8.4 million ramp for helicopters, a $1.2 million ramp for larger aircraft and a $1.5 million cargo facility have also been funded. The latter two projects should be completed this year.

Contrack International Inc., the company currently building the runway, has won the contract to build all the other projects as well.