At Bagram, a final salute to those lost in copter crash 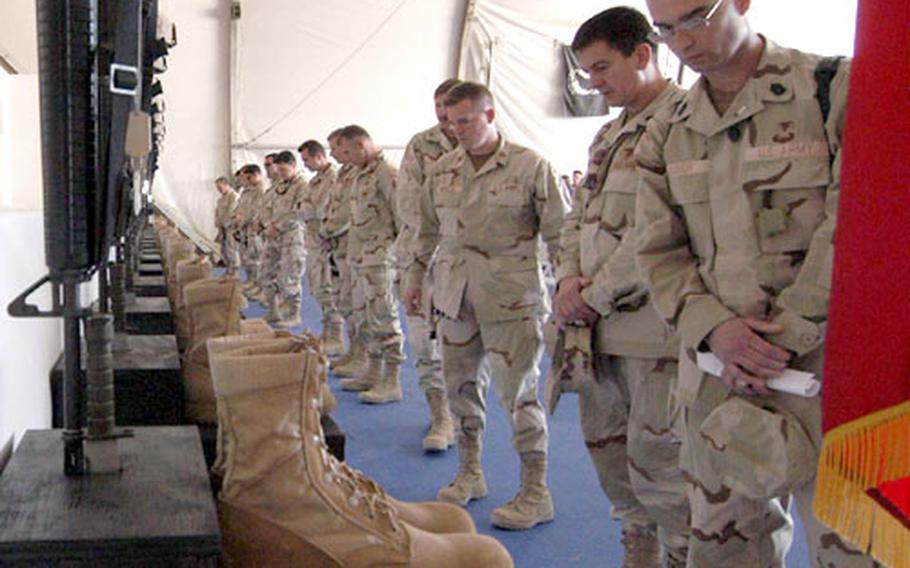 Paying last respects to the servicemembers and civilians killed in the crash of a CH-47 Chinook in Afghanistan on April 6, following the Combined/Joint Task Force-76 memorial service at Bagram Air Base on Friday. (Michael Abrams / S&S)

Paying last respects to the servicemembers and civilians killed in the crash of a CH-47 Chinook in Afghanistan on April 6, following the Combined/Joint Task Force-76 memorial service at Bagram Air Base on Friday. (Michael Abrams / S&S) Members of Combined/Joint Task Force-76 fire volleys in honor of the servicemembers and civilians killed in the Chinook crash. (Michael Abrams / S&S) 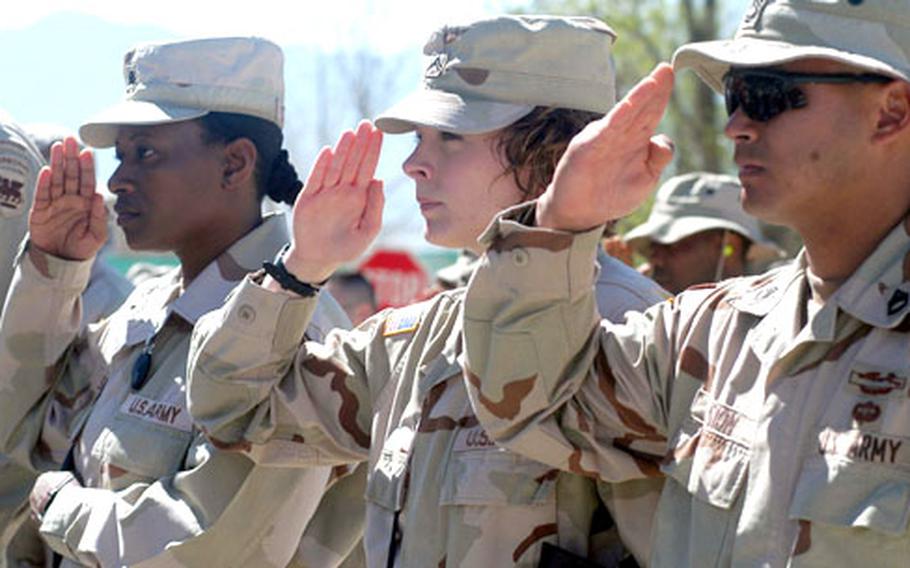 Soldiers salute during the playing of "Taps" at the memorial service at Bagram Air Base. (Michael Abrams / S&S) A mourner wipes away a tear during Friday&#39;s memorial service at Bagram. (Michael Abrams / S&S) 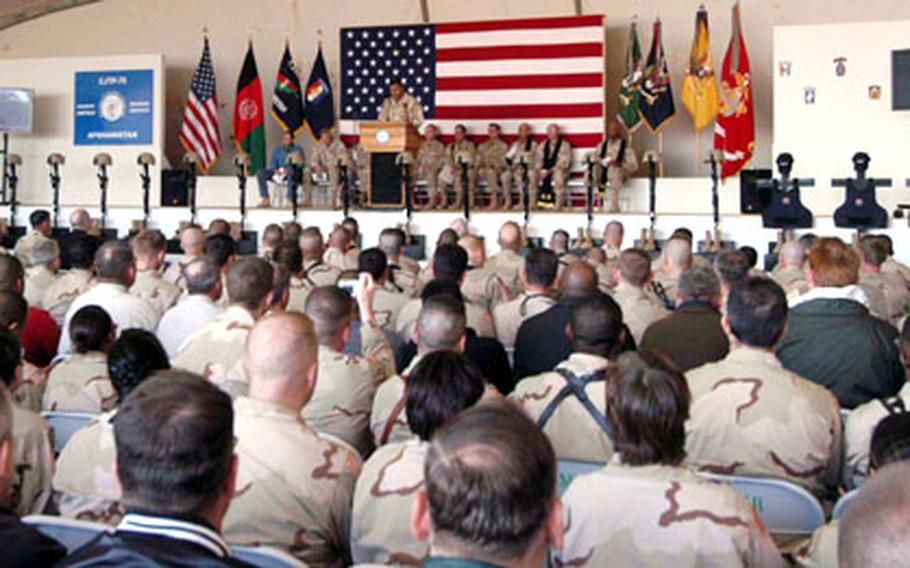 Combined/Joint Task Force-76 remembered its dead Friday morning with a memorial service for 18 Americans killed in an April 6 helicopter crash. Fourteen soldiers, a Marine and three civilians died when their CH-47 Chinook helicopter plummeted to the ground in bad weather.

Seven speakers spoke of those lives, paying tribute to individual servicemembers and civilians with words that could have described many or all of those killed.

Wilhelm quoted and paraphrased former President Reagan&#8217;s remarks after the space shuttle Challenger blew up after take off in 1987, killing all those on board: &#8220;Sometimes we reach for the stars, but sometimes we fall short.&#8221;

CJTF-76 Command Sgt. Maj. Iuniasolua Savusa, who read Scripture during the ceremony, echoed those thoughts afterward. He said the crash hit many hard, but &#8220;they&#8217;ll overcome this. It&#8217;s what those guys would have wanted,&#8221; he said, with a nod toward the row of boots, helmets, vests and caps set up in front of the clamshell building that normally serves as a basketball gym.

Savusa said he wanted to offer condolences on behalf of the command to all the families and friends of those who died in the crash.

Fleury tried to reassure friends and comrades attending the memorial.

&#8220;We can be sure that God will reward them for their faithfulness and their service. The heart knows that death does not end a relationship, it only changes it.&#8221;

Lt. Gen. David Barno, the senior U.S. commander in the country, British Maj. Gen. Peter Gilchrist, Maj. Gen. Jason Kamiya, the CJTF-76 commander, and Dick Christenson from the U.S. Embassy were among the dignitaries attending. They were joined by about 700 servicemembers and civilians, many of whom stood behind the bleachers and chairs filled with other mourners.

The service ended with a bagpipe rendition of &#8220;Amazing Grace,&#8221; followed by a 21-gun salute and taps. Digital pictures of the victims flashed on two screens during the bugle tribute while hundreds of mourners moved in a long line in front of each set of symbolic remains to pay their last respects.

Rick Reuter, regional project manager for Kellogg Brown & Root Services Inc., while speaking of the three KBR employees who died in the crash, summed up the thoughts of those paying tribute to all the dead.

Victims leave behind a legacy of service

Barbaralien Banks, 41, an Army sergeant major, from Harvey, La., was assigned to the 25th Infantry Division. Maj. Dewey Mosley, Banks&#8217; supervisor, said she had volunteered to fix a problem in the field, putting her on the flight. Sgt. Christian Monk said Banks was a strong female role model: &#8220;I hope to take what I have learned from her and pass it on to my soldiers.&#8221;

David S. Connolly, 37, an Army captain from Boston, was an Army reservist with the 1173rd Transportation Terminal Battalion and a prosecutor for Suffolk County, Mass. He had served in Iraq before joining the prosecutor&#8217;s office, where he was one of 10 assigned to the Boston Municipal Court.

Daniel J. Freeman, 20, an Army corporal from Cincinnati, was assigned to the 1st Battalion, 508th Infantry Regiment. Jack Kilbride, commander of the battalion&#8217;s headquarters company, said, &#8220;No matter how mundane, how menial or how difficult the task, Corporal Freeman accomplished it with a smile.&#8221;

Stephen C. High, 45, an Army sergeant from Spartanburg, S.C., was in the National Guard, assigned to the 228th Signal Brigade. Capt. Randall Price, who leads the 228th in Afghanistan, said High&#8217;s experience in the military &#8212; 15 years in the Navy and five in the Guard &#8212; made him a valuable asset to his unit. High&#8217;s mission of getting others up to speed on new Army radios had him traveling all around the country.

James S. Lee, 26, a Marine sergeant from Mt. Vernon, Ind., was with Marine Fighter Attack Squadron 142, Marine Aircraft Group 42, 4th Marine Aircraft Wing. Gunnery Sgt. Mikel Culver said his friend was looking forward to getting closer to his father and wife when he returned to the States. &#8220;There were a lot of things he wanted to do when he got back.&#8221;

Edward A. Matos-Colon, 42, an Army master sergeant from Juana Diaz, Puerto Rico, was assigned to the 25th Infantry Division. Col. Gary Cheek, commander of Task Force Thunder, said if there were a picture next to the definition of a mechanic in the dictionary, Matos would be there. &#8220;He was a man of great enthusiasm, one who would take on any mission, any task.&#8221;

Edward J. Murphy, 36, an Army major from Charleston, S.C., was assigned to the Southern European Task Force (Airborne) in Vicenza, Italy. Master Sgt. Steve Roberts said Murphy was &#8220;just a good guy.&#8221; He said Murphy had ventured out to see how things were going on the bases outside of Bagram. Murphy was due to head back to Vicenza in June to become the executive officer of the 509th Signal Battalion.

Chrystal G. Stout, 23, an Army specialist from Travelers Rest, S.C., was in the National Guard and assigned to the 228th Signal Brigade. Sgt. Leoreen Mackey said her friend was opinionated and willing to stand up for her beliefs. &#8220;She would give you the shirt off her back if you needed it.&#8221;

Sascha Struble, 20, an Army corporal from Philadelphia, N.Y., was assigned to the 1st Battalion, 508th Infantry Regiment. Struble was a paralegal who became a paratrooper and looked forward to a career in law after leaving the service. Struble was &#8220;a true combat multiplier who took good care of our soldiers,&#8221; said Lt. Col. Tim McGuire, the battalion commander.

Lance Bret Taylor, 36, a civilian KBR employee from Spring Valley, Calif., was a pest control technician. Rick Reuter, KBR&#8217;s regional project manager in Afghanistan, said Taylor and the other two KBR employees killed in the crash were part of &#8220;a pretty elite group of guys. They&#8217;re out there in the middle of nowhere and they really have to know their trades.&#8221;

Romanes L. Woodard, 30, an Army staff sergeant from Hertford, N.C., was assigned to the 1st Battalion, 508th Infantry Regiment. Kilbride called Woodard &#8220;a dedicated father and quiet professional.&#8221; McGuire said he was a key member of his maintenance platoon, adding, &#8220;We could not have deployed as a combat ready force&#8221; without him.