At Aviano, it’s all play and no work, for one day at least Jason Cohick, with part of a hot dog in one hand, takes a kick Monday during one of the events at a sports day at Aviano Air Base, Italy, on Monday. (Kent Harris / S&S)

Jason Cohick, with part of a hot dog in one hand, takes a kick Monday during one of the events at a sports day at Aviano Air Base, Italy, on Monday. (Kent Harris / S&S) 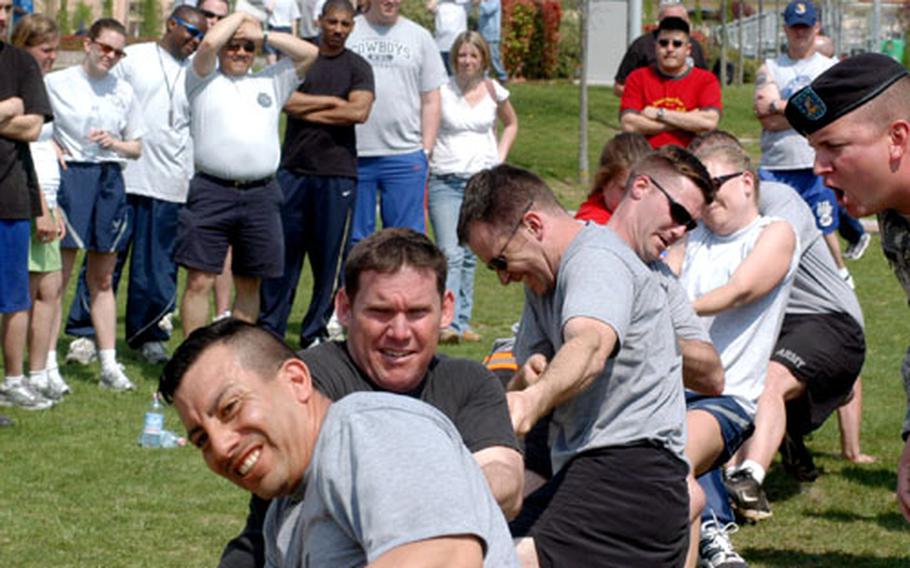 Soldiers from Company B, 5th Battalion, 158th Aviation Regiment, strain to pull the flag their way in a tug-of-war at Aviano Air Base, Italy, on Monday. (Kent Harris / S&S) Brig. Gen. Robert Yates, left, commander of the 31st Fighter Wing at Aviano Air Base, eventually got the best of his “sumo” opponent, Chief Master Sgt. Michael Schreck of the 31st Civil Engineer Squadron, during an exhibition at the base’s sport day on Monday. (Kent Harris / S&S) 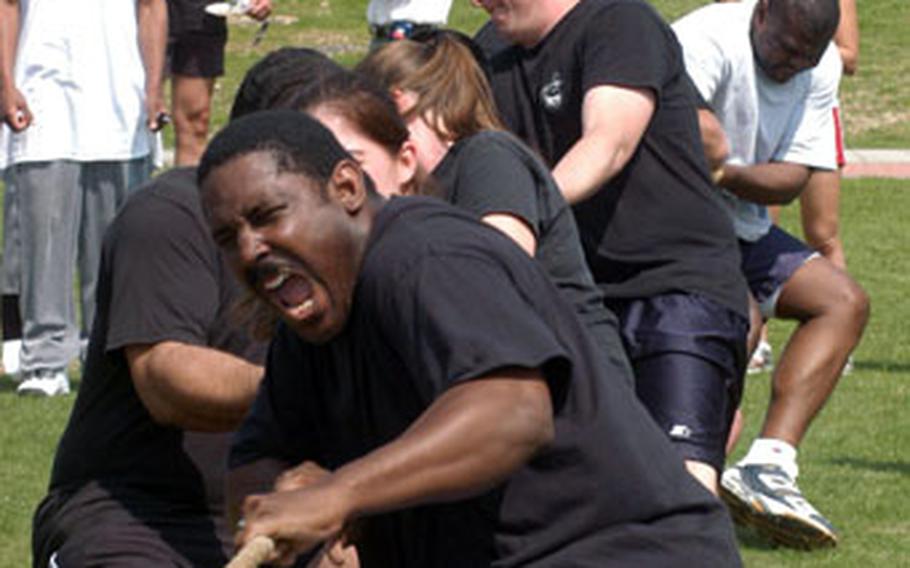 AVIANO AIR BASE, Italy &#8212; Thousands of servicemembers took advantage of a gorgeous Italian spring day on Monday to play some games.

And they had their commander&#8217;s approval. In fact, he essentially ordered it.

And generates a little sweat as well.

Sixteen teams from around the base, including an Army company that flies Black Hawk helicopters, competed in sports including: dodgeball, bench pressing, racquetball, tennis, horseshoes, and softball.

Master Sgt. Warren Baker, fitness section chief for the 31st Services Squadron, said thousands of airmen &#8212; as well as some soldiers and civilians &#8212; competed in at least one sport. Some competed more than once.

Everyone ran, or in a few cases walked, 2.1 miles to begin the day, with Yates leading a run in formation. After that, competing was optional, Baker said.

Of course, those that wanted to stay in their offices and work could do so.

But combined with an Italian national holiday, the hooky pass meant that offices were pretty empty around base all day.

Teams earned points in each event. The winners were to receive a trophy that they&#8217;ll keep at least until the fall, when Yates said the next sports day would be held.

He said the event serves to build teamwork while emphasizing the service&#8217;s renewed commitment to physical fitness. The base&#8217;s F-16 fleet was essentially grounded Monday because of the holiday anyway.

&#8220;You can tell everyone hates it,&#8221; he said, with a sarcastic grin and a wave at the crowd gathered to watch a tug-of-war between airmen and first sergeants.