At Area 1 in S. Korea, car restrictions mean the ride is by bus, bike or cab 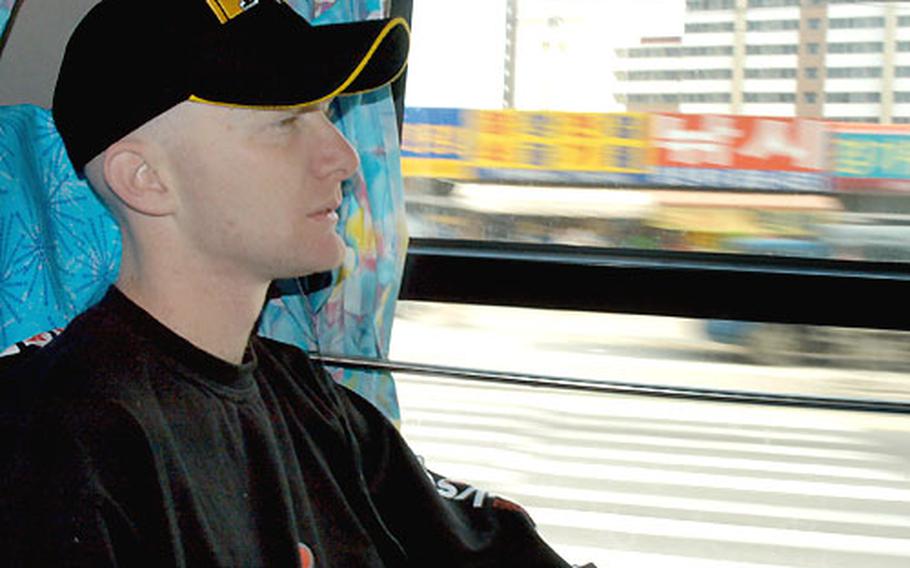 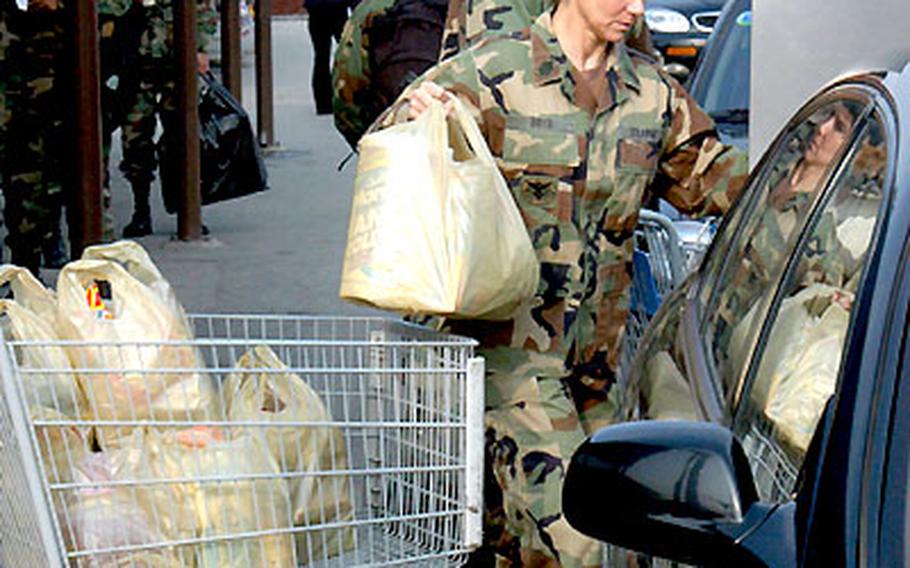 Soldiers at Camp Casey wait in line to load their groceries after shopping at the commissary. (Seth Robson / S&S)

Soldiers on unaccompanied tours aren&#8217;t allowed to own personal vehicles. Instead, they rely on buses, trains, bicycles and taxis for transportation.

The rationale for banning privately owned vehicles &#8212; that parking them would clog up bases already short of space &#8212; is widely accepted by the troops, who have access to free bus service between bases during work hours.

Sgt. James Dean of the 602nd Aviation Support Battalion recently rode the bus from Camp Stanley to Camp Casey to turn in a new laundry bag.

It was easier for Dean to make a four-hour round trip to Casey than to do the paperwork to pay the Army back for the bag. And catching a cab, at $25 each way, was too expensive.

Dean has ridden the bus to Casey about a dozen times during his time in South Korea, but he travels to Seoul every week to visit his wife. The bus trip to Seoul, like the ride to Casey, takes two hours and involves a transfer at CRC.

Dean switched to the train after he found out it takes only an hour and 15 minutes.

Dean is happy with the frequency of the buses but thinks they should all be free, at least during work hours.

On his laundry bag excursion the free bus to Casey was not leaving for 40 minutes after he got to CRC, so Dean paid to catch an earlier bus. Dean doesn&#8217;t think soldiers should be allowed their own cars, but that doesn&#8217;t stop him from missing his 2001 Dodge Dakota, which is in storage at his father&#8217;s house in West Virginia.

A more expensive way of getting around is by taxi.

A common sight outside the Camp Casey Post Exchange is a long line of soldiers, several with shopping carts laden with groceries, waiting for cabs.

One of the soldiers in the line recently was Staff Sgt. Diego Sanchez of the 2nd Engineers Battalion, on his way back to Camp Castle, three miles from Camp Casey. His five-minute taxi ride cost about $2.50.

Sanchez is preparing to go back to Fort Bragg, N.C., and he was turning in his cold weather gear.

Cabs are his most common mode of transport from camp to camp, he said.

Sanchez said not having his own car is inconvenient at times but there would be too much traffic inside the camps if every soldier had his or her own car.

Pfc. Camille Canady was also waiting for a cab after going grocery shopping at Camp Casey&#8217;s commissary. She had two weeks&#8217; worth of groceries in her cart and expected to pay $4 to get them home.

Canady is used to catching buses back home in Florida and rates the service here as average.

For those soldiers not worried about the helter-skelter nature of South Korean traffic, bicycles are an even cheaper way to get around and provide a workout at the same time.

Pfc. Uriah McBroom and Pfc. Chris Burns of the 2-9 Infantry&#8217;s Headquarters and Headquarters Company prefer to cycle between bases.

Back home in California, McBroom has a Dodge Neon, but he sees no need for a car in South Korea.

Most soldiers ride their bikes only around the bases, to and from work, Burns said.

So far the pair has ridden from Camp Casey to Yongsan Garrison in Seoul, to Camp Red Cloud several times, and to a host of tourist spots in Area I.

Burns enjoys riding in rural areas and across fields that aren&#8217;t being used for crops.

&#8220;I found areas that people talked about but I never knew where they were. We went to a monument with six or seven sets of stairs. We rode down it and we had little kids watching and laughing. We&#8217;d do tricks and they&#8217;d be amazed. It is a good feeling to make a little Korean kid smile.&#8221;

One problem, however, was brought up at a recent Camp Red Cloud town hall meeting when soldiers complained the buses don&#8217;t run often enough.

&#8220;At Camp Stanley their newcomers&#8217; orientation takes soldiers into the city and shows them the currency exchange and the bus system and takes them to the subway,&#8221; Hardy said.

&#8220;Once you walk out the main gate at Camp Casey, how do you get to Seoul?&#8221; he said, echoing the questions he has heard from soldiers over the years.

South Korean public transportation is often confusing because many signs are not printed in English, Oertwig said.

Buses are a cheap and reliable way to get around.

&#8220;Some foreigners, especially the Japanese, talk about how dangerous Korean buses are, but I have been riding them for years and have never had an accident.&#8221;

Down at the Uijongbu train station, a crowd of Korean soldiers emerged from the platform to join the crowds of their fellow countrymen and women browsing the markets nearby. There were no U.S. soldiers visible, but if they heed Vines&#8217; advice, that could change.