At AAFES shops in Iraq, soldiers snap up products as soon as they hit the shelves 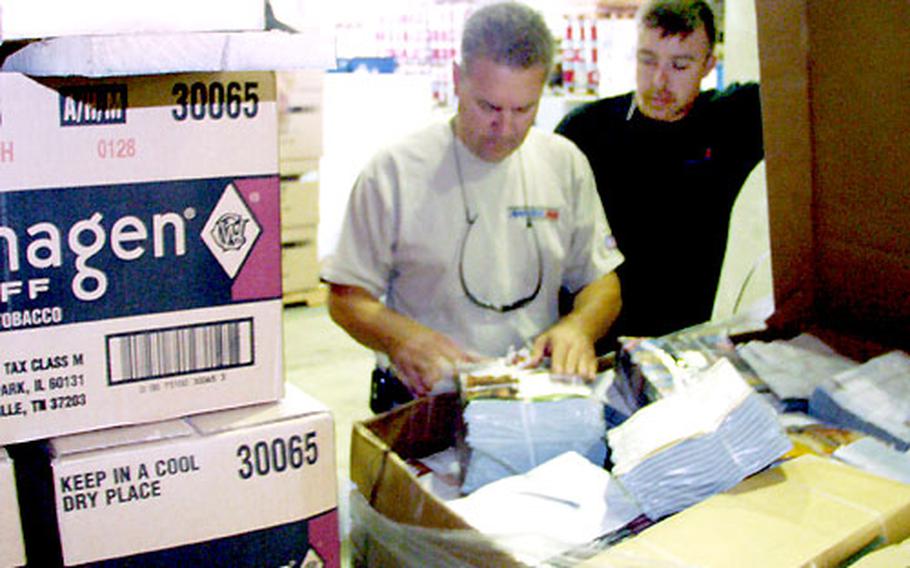 Dennis Hatcher, manager for the Army and Air Force Exchange in Iraq, and worker Fritz Eischenhauer check out a shipment of magazines headed for tactical field exchanges in Iraq. (Rick Scavetta / S&S)

KUWAIT CITY, Kuwait &#8212; As AAFES manager Dennis Hatcher prepared to close up shop for the night at the Talil, Iraq, field exchange, he tapped a soldier at the end of the line as the evening&#8217;s final customer.

Then, another soldier walked out of the dark.

The Talil field exchange, which opened April 5 inside a gymnasium on the former Iraqi air base near Nasiriyah, is just one of several shops the Army and Air Force Exchange Service has set up recently in Iraq. Others are in Umm Qsar, Baghdad International Airport and Camp Cedar, a convoy pit stop near Talil.

AAFES shipments from Kuwait are heading to V Corps&#8217; camp in Baghdad this week and to Balad, a city north of Baghdad. Merchandise slated for the failed military operation in Turkey will move to Mosul for troops in northern Iraq.

In Iraq, AAFES can&#8217;t stock enough portable DVD players, which go for $399. In Baghdad alone, 250 are sold on an average day. Compact discs and magazines are also big sellers.

Cans of soda also don&#8217;t last long in Baghdad. The military recently approved a local Pepsi distributor in Kuwait to supply AAFES with its products &#8212; good news for Mountain Dew fanatics. On May 7, the field exchange at Baghdad International Airport sold 5,400 cases of soft drinks &#8212; an average day&#8217;s sales for that camp, Hatcher said.

By mid-May, soldiers can expect to see specialty items exclusive to operations in Iraq, Hatcher said. Commemorative T-shirts, key rings, coins and cups are among the items being flown in. Local vendors will offer regional trinkets and stuffed camels, Hatcher said.

Despite the brisk sales, AAFES expects to lose money on contingency operations because costs to ship goods to the front lines eats up all the profits.

Tactical field exchanges &#8212; 40-foot trailers stocked with merchandise &#8212; were quickly added to the half-dozen Army staging camps north of Kuwait City, he said. Now, those trailers have been replaced by 3,000-square-foot prefabricated buildings.

In Kuwait, business has been steady as troops heading north to Iraq stock up on favorites such as Gatorade, baby wipes, tobacco products and snacks, De Moss said. Then, troops redeploying from Iraq, no doubt craving one thing or another, hit the PX while waiting to ship home.