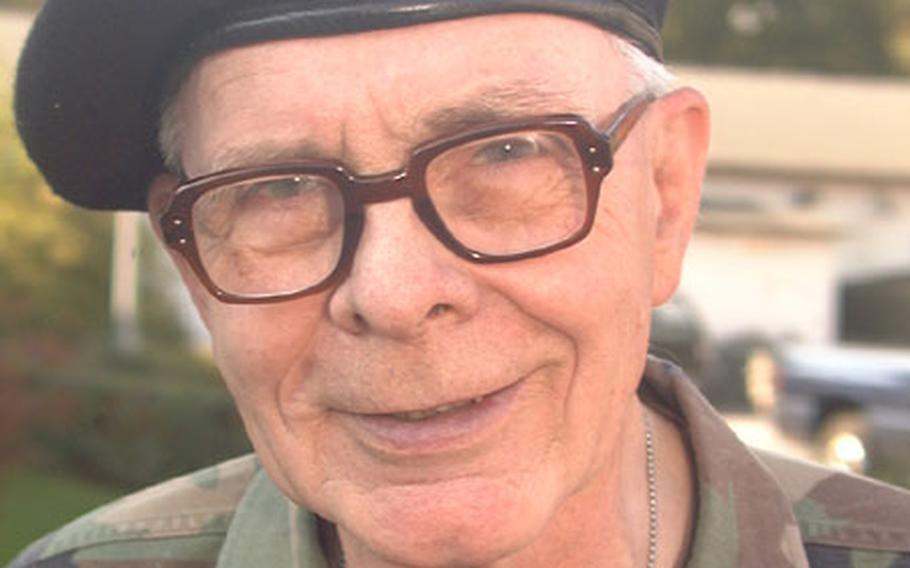 Charles Ehrhart, 70, a Catholic chaplain in Giessen and Friedberg, Germany, is the oldest chaplain in the United States Army. (Kevin Dougherty / S&S)

GIESSEN, Germany &#8212; Jake Rabena sat in a pew and doodled while Charles Ehrhart, a Catholic chaplain, recited from the Bible.

Every now and then, the 4-year-old would stop drawing and glance up at Ehrhart, said Mary Ann Ernst, a family friend and fellow parishioner. At the end of the sermon, Jake leaned toward Ernst and made an observation.

No, Jake, Ehrhart isn&#8217;t God, but you were in the presence of the oldest chaplain in the U.S. Army.

Lt. Col. Keir-Kevin Curry, an Army spokesman, did confirm, however, that Ehrhart is the oldest chaplain in the service.

How can this be?

The Army has a maximum age limit of 35 for new recruits. However, there are exceptions for men and women of the cloth &#8212; typically 45 years.

But the shortage of Catholic priests in the Army is so acute that the service even allows exceptions to the exception, and Ehrhart is certainly an exception to the rule.

Ehrhart is required to do physical training, but the Army knows better than to ask a 70-year-old soldier to do push-ups or make a timed run. Instead, Ehrhart walks and swims to stay fit and focused for his flock, which views him as a &#8220;father figure,&#8221; Ernst said.

Last Tuesday, Ehrhart celebrated his 70th birthday. Ernst surprised the chaplain, who arrived in Giessen two months ago, with a Superman-decorated cake.

Ehrhart&#8217;s age certainly made Hans-Joachim Thiele do a double take when the chaplain applied for a U.S. Army Europe driver&#8217;s license. Thiele didn&#8217;t believe his customer until he produced a military identification card. The chaplain then proceeded to whip through the test: 50 road signs and 100 questions.

He passed, of course.

Ehrhart hasn&#8217;t always been one for taking the conventional route.

Though he didn&#8217;t join the Army until he was 50, Ehrhart had been asking his church for permission for more than 20 years. His interest partly stems from having four of his five brothers in uniform over the years.

The diocese finally gave its blessing in 1983.

He was suppose to be retired this month, but was retained because of the shortage of Catholic priests in uniform. Currently, the Army has less than a third of the priests it needs. In contrast, Ehrhart said, Catholics account for roughly 38 percent of the active-duty population.

So, Ehrhart figures he&#8217;ll stay in Germany for two or three years, shepherding Giessen and Friedberg parishioners through these challenging times. Though he&#8217;d like to go to Iraq, Ehrhart said he&#8217;s been told his place is in the community.