At 61, IMA-Europe worker trains for race in French Alps 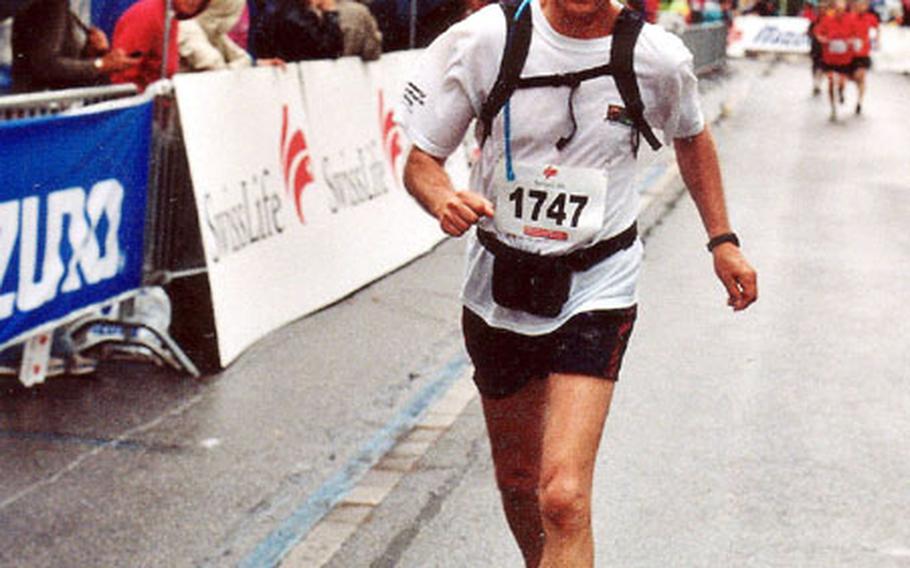 Rainer Schulz, a retired Army officer and IMA-Europe employee, finishes a marathon in Biel, Switzerland, earlier this year. He will compete at the end of the August at the Mont Blanc Run, a nearly 100-mile race beginning in Chamonix, France. (Courtesy of Rainer Schulz)

When he&#8217;s not working at Installation Management Agency-Europe as the chief of the residual value section-real estate, Schulz, 61, spends every free moment running, inline skating, cycling or kayaking.

All this time spent on training is for a much larger goal: to compete in ultra-marathons (anything longer than the standard 26-mile marathon) and all-night marathons, which can last for days at a time and may be nearly 100 miles.

&#8220;Most of my time off is in physical sports activity,&#8221; said the retired lieutenant colonel, who is from Berlin. Schulz became a U.S. citizen and served in the Army for 25 years.

A person can train physically only to a certain point, he said, and any race of 30 miles or more requires a person to be in excellent condition.

Before 1993, Schulz had never run more than about six miles at one time. But after a friend got him interested in marathon running, it was all uphill from there.

Schulz joined a team of amateur 30-something athletes to compete in adventure racing &#8212; picture an extreme version of the &#8220;Survivor&#8221; TV series.

In the Scottish Highlands, Sicily and Finland, Schulz and his team of four to five men and women would run, hike, rappel, inline skate, canoe and even rope their way across gushing rivers.

And be able to go without sleep for hours on end.

This month, Schulz hopes to achieve an individual goal that he has been training for all year &#8212; to finish a nearly 100-mile night marathon around the base of Mont Blanc in the French Alps. The race, which requires climbs of more than 26,000 feet, begins in France and goes into Italy and Switzerland.

Schulz competed at the Mont Blanc Run last year, but after nine hours, he succumbed to the harsh, wet weather and bowed out after running about 75 miles. Of the roughly 600 participants, only 67 people finished the race.

Schulz is confident he can finish the race this year.