Assessing the alliance as summit nears 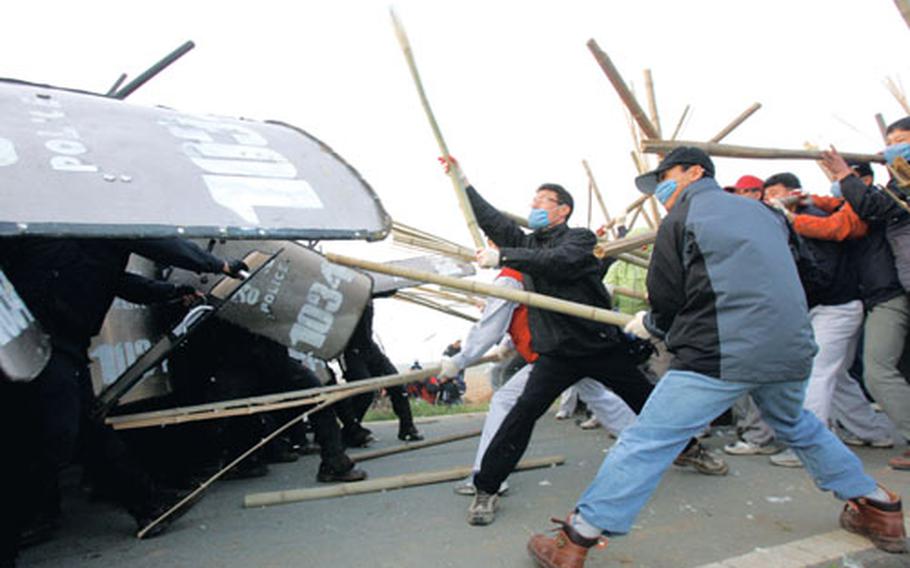 South Koreans protesting the expansion of a U.S. military base fight with riot police at Pyeongtaek, south of Seoul, in 2006. (Ahn Young-Joon / AP)

This is the first in a two-day series exploring the South Korean population&#8217;s perception of the U.S. military presence.

Polls show that a significant number of South Koreans want the U.S. military to eventually leave the country &#8212; as much as 55 percent, according to a survey conducted by a South Korean newspaper. Others say the 63-year U.S. presence in South Korea has allowed the country to develop and continues to deter an attack from North Korea.

&#8220;They are the ones who made it possible for us to live well and eat well,&#8221; said Kim Gae-yeup, 67, who sells roasted chestnuts at a stand in downtown Seoul.

President Lee Myung-bak&#8217;s spokesman declined to say if Lee would ask for a pause in the drawdown during his first meeting with Bush.

&#8220;If he does ask for that pause, I think it would be prudent for the United States to agree to sit down and discuss the issue and then potentially execute a pause based on those discussions,&#8221; Bell testified.

Most Koreans want U.S. troops to stay here because of the security they provide against North Korea, said Lee Sang-hyun, director of the Security Studies Program at the Sejong Institute.

The United States sent 72,000 troops to South Korea at the end of World War II to occupy the country at the end of a 35-year Japanese occupation. By 1950, the year North Korea invaded the South to begin the Korean War, only about 500 U.S. military advisers remained in South Korea, according to the U.S. Statistical Abstract.

When the armistice was signed ending hostilities on the peninsula in 1953, nearly 327,000 U.S. troops were stationed here. By 1955, U.S. troop levels had dropped to 75,000 and have declined gradually since then.

In the past five decades, South Korea has been building its own military and is scheduled to assume wartime control of all troops on the peninsula from the United States in four years.

Today, both nations are wrestling with what the U.S. military&#8217;s role should be in a country that has changed from a war-torn destination for U.S. Peace Corps workers to the 11th-largest economy in the world.

In a speech to Congress last month, Bell said 75 percent of South Koreans believe the U.S. military presence here is important to their country&#8217;s national security.

Sixty-eight percent believe their country should maintain the U.S.-South Korean defense treaty, even if the threat of aggression from North Korea ends, he said.

&#8220;Today, we are indeed welcome and wanted in the Republic of Korea,&#8221; he told the Senate Armed Services Committee on March 11.

Bell&#8217;s spokesman said those statistics came from a recent State Department study that couldn&#8217;t be released to the public.

According to a poll conducted in September 2007 by JoongAng Ilbo, a daily newspaper in Seoul, 55 percent of respondents said they wanted the U.S. troops to withdraw gradually and 7 percent wanted an immediate U.S. military pullout.

Twenty-eight percent told the JoongAng they wanted the United States to remain for a considerable period of time, and 10 percent wanted a continued presence.

For years, U.S. military installations provided some of the only jobs for South Koreans who didn&#8217;t want to farm. Over the decades, as South Korea&#8217;s economy blossomed, other jobs opened up, and the population&#8217;s sense of nationalism began to grow as its reliance on America decreased.

&#8220;Generally speaking, Koreans are kind of mixed in their feelings about the U.S.,&#8221; said Frank Concilus, a professor of sociology, anthropology and Asian studies at the University of Maryland.

Their opinions differ based on how much of a military threat they perceive North Korea to be, he said.

Experts say 2002 was a low point in relations between the two countries. National pride was at a high as South Korea co-hosted the World Cup with Japan, and anti-American feelings were growing after a South Korean speed skater lost an Olympic race when an American skater claimed he illegally pushed him aside during the event.

In June that year, a 57-ton U.S. armored vehicle accidentally crushed two 13-year-old Korean schoolgirls walking to a birthday party north of Seoul. Their deaths sparked a wave of candlelight vigils, calls for the U.S. military to leave the country, and often violent anti-American protests.

The U.S. military made condolence payments to the family, and paid for a monument to the two girls, Shin Hyo-sun and Shim Mi-son. A military court later found the driver and vehicle commander not guilty of negligent homicide, but many Koreans felt someone should have been held accountable for the deaths.

&#8220;I think the United States really blew it,&#8221; Concilus said. &#8220;The United States said they were sorry, but they didn&#8217;t show the kind of remorse and regret that I think would be expected in either Japanese or Korean culture

&#8220;The Americans kind of blithely thought a court-martial would solve the problem, but of course, it didn&#8217;t. The Koreans saw that as a kangaroo court, where nobody was punished,&#8221; he said.

Memory of the accident has faded, though experts say anti-Americanism could flare up again quickly.

That incident and the growing anti-Americanism prompted USFK to expand and formalize its community relations program. Today, the USFK Good Neighbor program sponsors sporting events, concerts and other events between the U.S. and South Korean militaries and citizens.

Nearly six years after Shim and Shin died, anti-Americanism has largely died down, and most Koreans want the U.S. military to be here, said Mark Monahan, a professor of Asian studies at the University of Maryland in Seoul. About 1 million Koreans now live in the United States, so many people in South Korea have sons, daughters and grandchildren there.

Those personal ties to the America and South Korea&#8217;s decreased reliance on the United States have improved the bond between the countries, he said.

Tomorrow: Hear directly from the people on the streets of Seoul &#8212; as well the U.S. military members who live in South Korea.