‘Assam Draggins’ have a blast at Osan 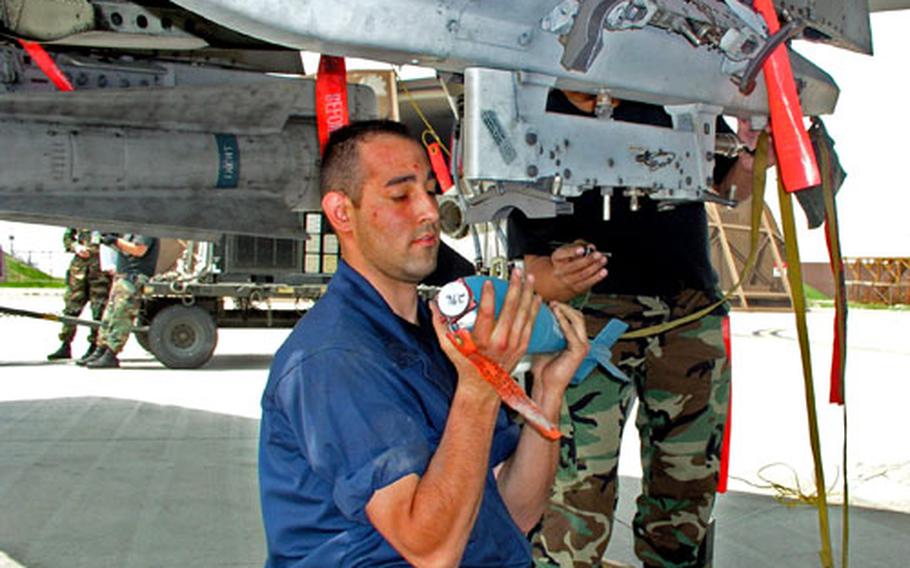 Senior Airman Joshua Rodriguez Weapons loads a 25-pound practice bombs on one of the squadron&#39;s A-10 attack planes. To the rear is his supervisor, Staff Sgt. Percival Cabase. (Franklin Fisher / S&S)

OSAN AIR BASE, South Korea &#8212; It&#8217;s a bright, hazy Thursday at Osan Air Base and Senior Airman Joshua Rodriguez and the other weapons loaders have their work cut out for them.

Stretching down their squadron&#8217;s parking ramp are about a dozen A-10 attack planes that need to be readied for a training mission. The planes belong to the 25th Fighter Squadron, known as the &#8220;Assam Draggins;&#8221; Rodriguez, hatless and wearing blue coveralls, is a member of its weapons flight.

The squadron, the only A-10 unit in South Korea, specializes in attacking ground targets, especially at close distance to friendly troops.

He and two other weapons loaders, one of them Staff Sgt. Percival Cabase, must hurry from plane to plane, loading each with nine blue, 25-pound training bombs called BDU-33s.

Later that day, the pilots will take off and drop the bombs while practicing a variety of combat missions.

On other days, the loaders may attach live bombs, Maverick missiles and other weaponry. But Thursday&#8217;s focus was to get the small BDU-33s attached properly and on time.

When a BDU-33 hits, it emits white smoke, enabling range scorers and the pilots to gauge where the bombs landed in relation to the target.

Plenty goes into being a good weapons loader, Rodriguez said.

&#8220;Swaying&#8221; refers to making sure the bomb is attached securely for flight, he said. &#8220;Carting&#8221; is inserting a small silver explosive cap that detonates and causes the bomb to release when the pilot hits the weapons release button.

They spend about 10 minutes at each aircraft, then move briskly down the ramp to the next.