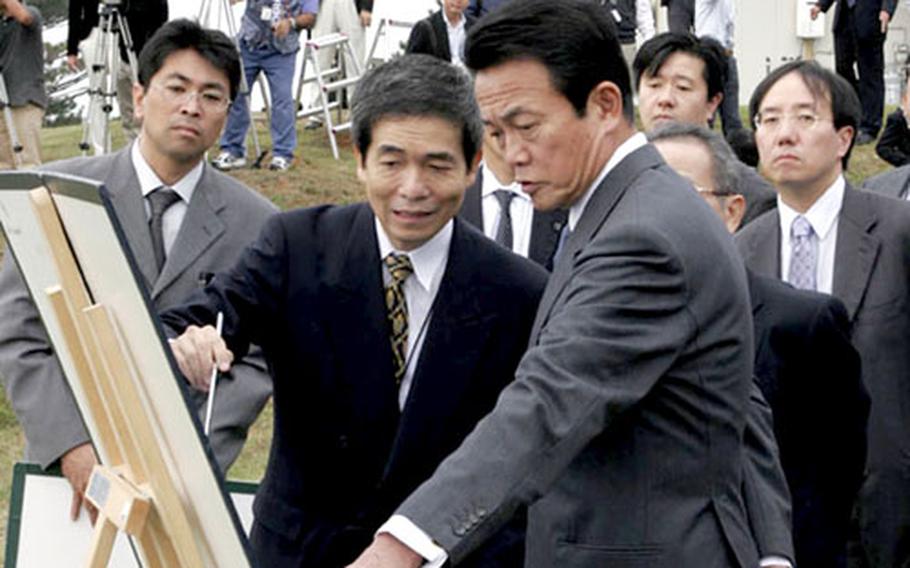 NAHA, Okinawa &#8212; A month into his new role as Japan&#8217;s minister of foreign affairs, Taro Aso visited Okinawa on Friday in an effort to persuade local officials to accept a bilateral plan to realign U.S. troops in Japan.

His pitch was simple: Lighten up on your opposition to the realignment report.

The plan calls for building a new air station on Camp Schwab that will extend into the shallow waters of Oura Wan Bay and transferring 7,000 Marines from Okinawa to Guam and mainland Japan over six years. Marine bases are to be consolidated to the northern camps, resulting in the closure of camps Kinser and Lester and part of Camp Foster.

The U.S. and Japan governments plan to issue a more detailed report and a relocation schedule by March.

The plan has drawn stiff opposition throughout Japan, especially from Okinawa officials who say the proposed new airport is too close to local communities in rural Nago.

Aso has taken a hard line on the realignment report, arguing &#8220;what has been basically agreed will remain unchanged.&#8221;

&#8220;It is natural for Japan to fulfill its responsibilities in order to enjoy peace and stability,&#8221; he said, adding that his country is not in a position to secure its security by its own national defense strength alone.

&#8220;It is necessary for Japan to cooperate with the United States and use its deterrence power,&#8221; he said. &#8220;However, the burden of hosting military bases should not be shouldered by Okinawa alone.&#8221;

The realignment plan is designed to reduce that burden, he said.

&#8220;Even after the end of Cold War, instability still exists in the Asia and Pacific region,&#8221; he said. &#8220;From a geopolitical viewpoint, there is no mistake that Okinawa, the southernmost prefecture of Japan, is located close to the region that has problems.&#8221;

The implication was clear that he was talking about China, now amid a massive arms buildup. The two countries already are at odds concerning Japan&#8217;s possession of small islands close to Taiwan.

Aso&#8217;s comments came at a time when other Japanese leaders already are casting doubt on who would win a conflict in Asia.

During a Nov. 3 speech in Washington, Tokyo Gov. Shintaro Ishihara warned that the United States would not win a war with China.

&#8220;In my opinion, we are living in a greater danger than the days of the Cold War,&#8221; Ishihara said in an address to the Washington-based Center for Strategic and International Studies. &#8220;I think the result would be quite obvious between the country where human lives are regarded as very important and the country where there is a total ignorance on the value of human lives &#8230; the U.S. would not be able to win a war over China.&#8221;

After meeting with Aso on Friday, Okinawa Gov. Keiichi Inamine said he welcomed the proposed move of the Marines and closure of the bases in the urban southern section of the island.

However, he said he was adamantly against the Camp Schwab plan. He had favored construction of a larger replacement for Camp Schwab to be built on reclaimed land and a reef about two miles offshore.