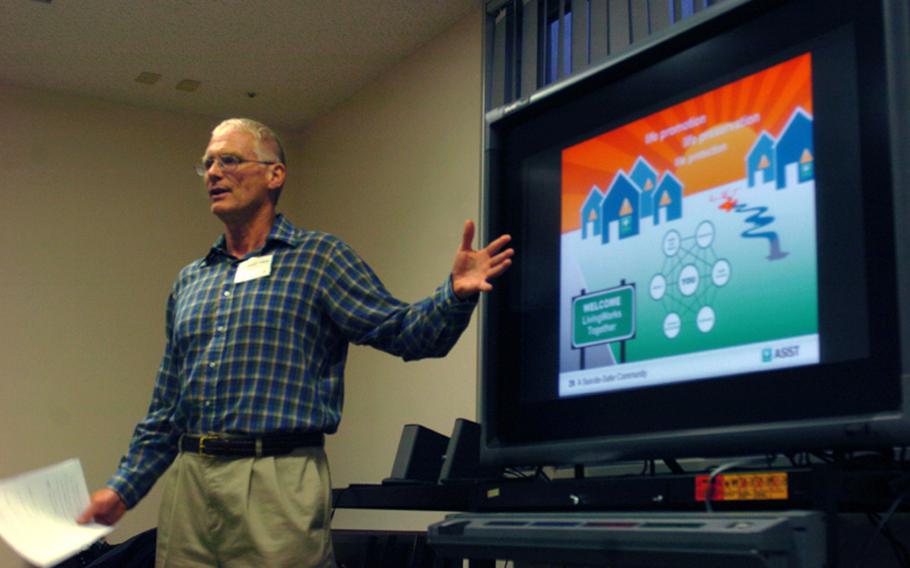 Buy Photo
Capt. John Swanson, a chaplain and trainer for the Applied Suicide Intervention Skills Training, wraps up the two-day course for sailors and civilians at Yokosuka Naval Base on Oct. 28. Trainers say the program, which encourages active identification and intervention, has already helped at least one suicidal person get the help they need. After years of rising suicide rates, the Navy appears headed for a decline in 2010. (Erik Slavin/Stars and Stripes)

It is one of the toughest questions that Petty Officer 3rd Class David Callahan and others who recently became &ldquo;suicide first-aid responders&rdquo; at bases in mainland Japan and Okinawa could imagine asking anybody. It is uncomfortable to do even in a role-playing exercise.

For Callahan, the courage to ask comes from knowing that the number of servicemembers dying by suicide has risen sharply over the past decade.

&ldquo;Those people that died weren&rsquo;t asked the question,&rdquo; Callahan said last week by phone from Misawa Air Base. &ldquo;Asking the question, no matter how hard or painful, might save a life &mdash; and that&rsquo;s worth far more than the few minutes of discomfort that you&rsquo;re going to feel.&rdquo;

Despite military prevention efforts, the suicide trends in most services continue to alarm top leaders in 2010. However, the Navy&rsquo;s efforts appear to have been more effective. Twenty-nine Navy suicides were reported as of November, down from 46 for all of last year, according to the Navy Personnel Command.

Suicide prevention experts say it is too early to claim success or attribute the potential drop to any one program. However, the Applied Suicide Intervention Skills Training, which emphasizes a first-aid mind-set, is making passionate supporters out of sailors wary of annual training on so many other subjects.

The Army and civilian suicide prevention groups have long used the program to some extent, but it is new to much of the Navy.

Instead of relying on PowerPoint and online click-throughs, face-to-face interaction dominates the two-day session.

Participants take turns inhabiting the personas of people searching for reasons to live and caregivers who sometimes struggle to persuade those in need to abandon plans for suicide.

Along the way, the participants learn to look for clues in speech and behavior that may indicate suicidal thoughts.

They are not trained to be mental health professionals, but they learn where the professionals are and how to get people the help they need.

The program challenged much of what sailors thought they knew about bringing someone back from the brink.

For example, the Navy often promotes a culture of quick problem solving &mdash; which is generally the wrong thing to do with a suicidal person.

&ldquo;It&rsquo;s the exact opposite,&rdquo; said Petty Officer 3rd Class Jesse Houseknecht, a participant at an October session at Yokosuka Naval Base. &ldquo;It&rsquo;s listening and following through instead of confronting right away.&rdquo;

That includes talking with the person about why they want to die.

&ldquo;We spend a good chunk of our existence denying the reality of death,&rdquo; Swanson said. &ldquo;As a society, it&rsquo;s not something we&rsquo;re comfortable talking about.&rdquo;

However, spending time on the &ldquo;death side&rdquo; often leads despondent people to bring up the reasons that they want to live, Swanson said.

Despite the Navy&rsquo;s focus on the problem, privacy issues and the military&rsquo;s emphasis on toughness and self-reliance can sometimes work against suicide prevention.

By regulation, sailors are required to report suicidal behavior. That saves some lives in some cases, especially when a suicide plan is imminent.

In other cases, Swanson acknowledged, it probably keeps sailors from talking about their feelings.

Chaplains use more discretion on whether to report suicidal feelings because of privacy guidelines.

However, &ldquo;on lots of ships, there&rsquo;s no chaplain, and if you go to medical and tell them, it goes up the chain of command,&rdquo; said Petty Officer 2nd Class Brunette Marseille, another Yokosuka participant.

While several sailors at the workshop say the Navy is getting better about viewing suicide as a health issue instead of a character flaw, there is plenty of room for improvement. Callahan believes that expanding the ASIST program would help.

The day after Callahan took the class, a sailor told him about a colleague who said he wanted to be deployed someplace where he had a chance of being killed.

In that case, supervisors found help for the sailor soon after the comment. But Callahan said he was ready to intervene; in the past, he probably would have let it slide.

&ldquo;The course changed how I reacted,&rdquo; he said. &ldquo;Sometimes, people aren&rsquo;t going to say anything about a sailor [contemplating suicide] because they don&rsquo;t want to cause trouble. But the training really helps you see that sometime all you get are subtle clues before someone really needs to intervene.&rdquo;

More information on ASIST is available at www.livingworks.net.