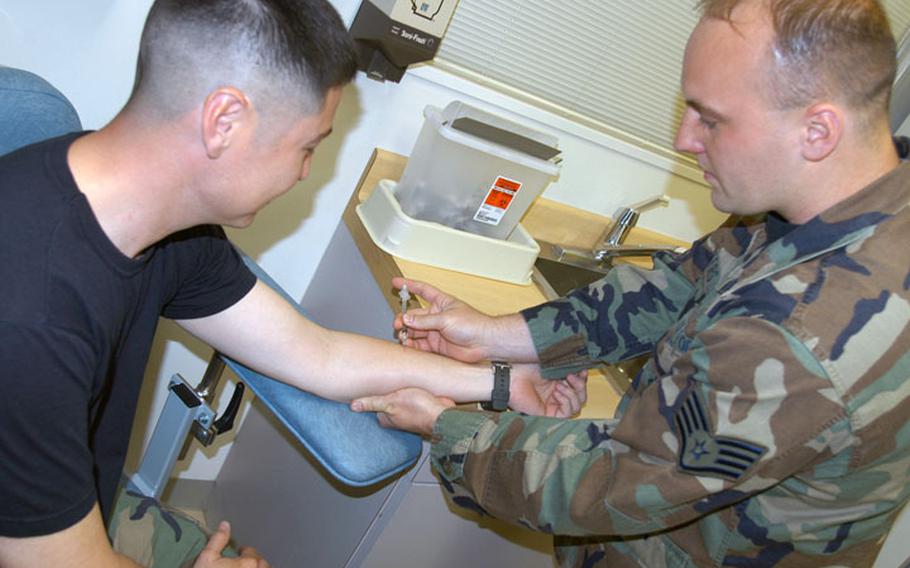 It can be scary news: Your spouse&#8217;s or child&#8217;s skin test for tuberculosis is positive. Primarily a respiratory illness, tuberculosis is curable but can kill if left untreated. About 1.7 million people worldwide die annually from the disease.

Someone exposed to tuberculosis bacteria usually tests positive on the tuberculosis skin test. It can mean a person is infected but not sick, that the disease is latent, not active.

But it&#8217;s not always that simple. Just being vaccinated against TB also can produce a positive test result.

So if you&#8217;re marrying a local national in Asia and you test positive, or if your kids have been vaccinated for TB off base, chances are doctors will recommend you take antibiotics every day for nine months to decrease the risk of developing active TB later in life, medical officials said.

Similarly, if your kids have been vaccinated for TB off base and they test positive, doctors might recommend they also take the antibiotics. That, they say, is because there&#8217;s no way to tell whether a vaccination or the disease caused a positive result on a TB skin test.

U.S. military medical personnel in Japan and South Korea say they deal with this issue every year, stemming from different vaccination practices in the United States and Asia.

Since risk of tuberculosis infection is low in the United States, the TB vaccination bacilli Calmette-Guerin, or BCG, is not generally recommended for use, according to the Centers for Disease Control and Prevention. U.S. military medical facilities overseas follow CDC guidelines for treatment and screening of tuberculosis and don&#8217;t provide the BCG vaccine to their patients, medical officials said.

But BCG routinely is given to children in Asia &#8212; including in Japan and South Korea &#8212; where tuberculosis is more prevalent, to prevent childhood tuberculosis, meningitis and miliary disease, according to the CDC.

Dependents and foreign-born nationals must be tested for tuberculosis at U.S. military bases when applying for a marriage certificate or certain jobs, or when registering for school or day care.

&#8220;I would say the majority of people in Japan who had BCG do pop positive&#8221; on the tuberculosis skin test, said Navy Lt. Eric Pauli, TB educator at U.S. Naval Hospital Yokosuka.

But in line with CDC guidelines, U.S. military medical personnel in Japan and South Korea say they treat all positive TB tests the same.

Active-duty members routinely are tested for TB. If they test positive, they usually must take isoniazid, or INH, antibiotics to kill TB bacteria. INH also is recommended for most family members but they can&#8217;t be forced to take that treatment, medical officials say.

The TB skin test is just a screening test, said Air Force Lt. Col. Kevin Connolly, 35th Aerospace Medicine Squadron commander at Misawa Air Base, Japan. Medical officials will ask a patient where they were born, where they&#8217;ve traveled, if they may have been exposed to someone with TB, as well as listen to their lungs and take a chest X-ray to see if there are any signs of active TB, Connolly said. &#8220;We ask if they&#8217;ve had any symptoms of TB, which includes fever, chills, night sweats, unintentional weight loss, cough, coughing up blood,&#8221; he said.

If no symptoms of active tuberculosis are present, family members may ask their physician to note that on their health record, medical officials said. Since tuberculosis in its latent form is not contagious, a health-care provider can &#8220;make the recommendation that this person is safe to work or, if it was a school physical, this patient should be able to attend school,&#8221; Connolly said. If symptoms appear later, the person should see a health-care provider immediately, he said.

An infected person who doesn&#8217;t get the treatment has about a 5 percent lifetime risk of developing tuberculosis, according to Navy documents.

&#8220;Your antibodies can fight it but TB bacteria will hide out in lymph nodes and it can recur,&#8221; Pauli said.

Potential side effects of the INH treatment include nausea, vomiting, loss of appetite and tiredness but &#8220;I&#8217;ve heard of no patients we&#8217;ve treated having side effects,&#8221; Pauli said. INH also can affect the liver so it&#8217;s not recommended for patients with liver problems, officials said.

Hundreds of people are tested monthly at Yokosuka&#8217;s hospital, added Pauli, with on average about 30 people a month &#8212; a mix of active-duty members and non-U.S. citizens &#8212; testing positive for possible tuberculosis infection.

Active TB cases have been reported at Yokosuka but it&#8217;s not common, Storlie said.

&#8220;We average about one or two cases of active TB a year, and the demographics are diverse on those patients.&#8221;

Medical officials worry about the disease because when it does surface, people may not seek medical attention right away because TB can start with minor symptoms such as a mild cough, Storlie said.