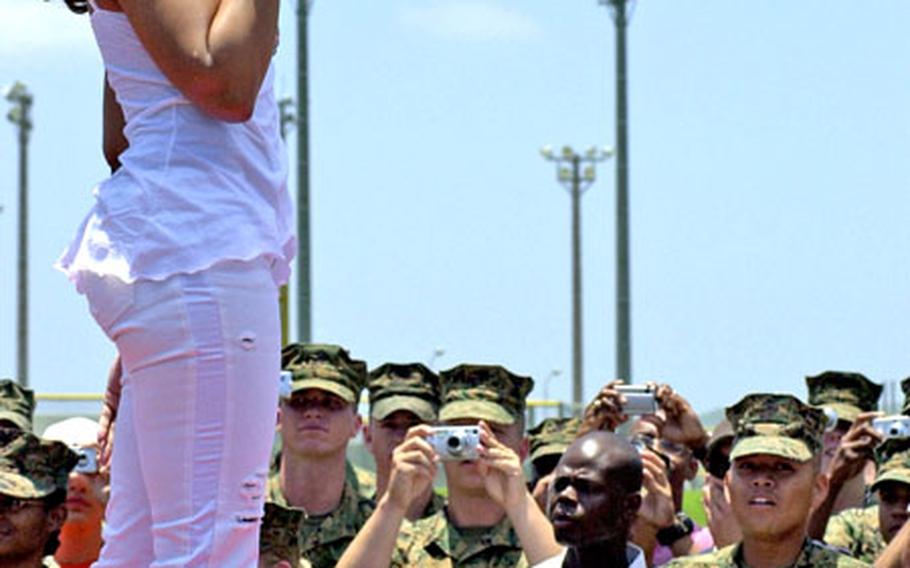 R&B singer Ashanti talks Sunday to members of the 31st Marine Expeditionary Unit on Camp Hansen. Ashanti, who had a concert on Okinawa that same night, thanked the Marines for their recent service in Iraq. The singer visited Camp Hansen after playing a show Saturday night in Osaka. (Fred Zimmerman / S&S)

CAMP HANSEN, Okinawa &#8212; R&B singer Ashanti stopped by Camp Hansen on Sunday afternoon to give her thanks to the Marines and sailors of the 31st Marine Expeditionary Unit for their recent service in Iraq.

More than 100 servicemembers waited for the singer on Camp Hansen&#8217;s parade field just after noon. According to Marine Corps officials, Ashanti traveled to the camp straight from the airport after arriving from mainland Japan, where she played a Saturday concert in Osaka. She was scheduled to give a Sunday night concert at the Ginowan Outdoor Theater on Okinawa.

After Ashanti was introduced, several Marines quickly stepped forward to give her a hand onto a tall makeshift stage. She addressed the Marines and sailors for several minutes, thanking them for their service and welcoming them back from their recent tour in Iraq.

After her comments, a representative from Positive Productions, which organized her Japan tour, handed out free concert tickets to 25 servicemembers.

Lance Cpl. Olanda Carroll, from MEU Service Support Group 31, was one of the lucky ones able to snag a free ticket. He said, &#8220;It feels good when somebody shows appreciation for what you&#8217;re doing. It almost makes you feel famous.&#8221;

After the free tickets were handed out, Ashanti took a few moments to pose for photos before heading to the camp&#8217;s United Service Organizations building. There she ate lunch and briefly walked around the building greeting the troops.

Ashanti&#8217;s opening act, E. Kain, has been in Marine shoes before. Once known as Gunnery Sgt. Tim Edwards, from 1999 to 2003, he worked on Marine Corps Air Station Futenma in Marine Air Logistics Squadron&#8217;s Power Plant section.

Kain said Ashanti was asked to visit Camp Hansen and play an Okinawa show because &#8220;I wanted to give back to the Marines. We told Ashanti, &#8216;Please, these guys have been in Iraq. Can we do something for them?&#8217; It shows that the world still cares.&#8221;

Kain called the singer a very giving person who quickly agreed to the visit. He said Ashanti was was supposed have the morning off, but she wanted to do something for troops on Okinawa.