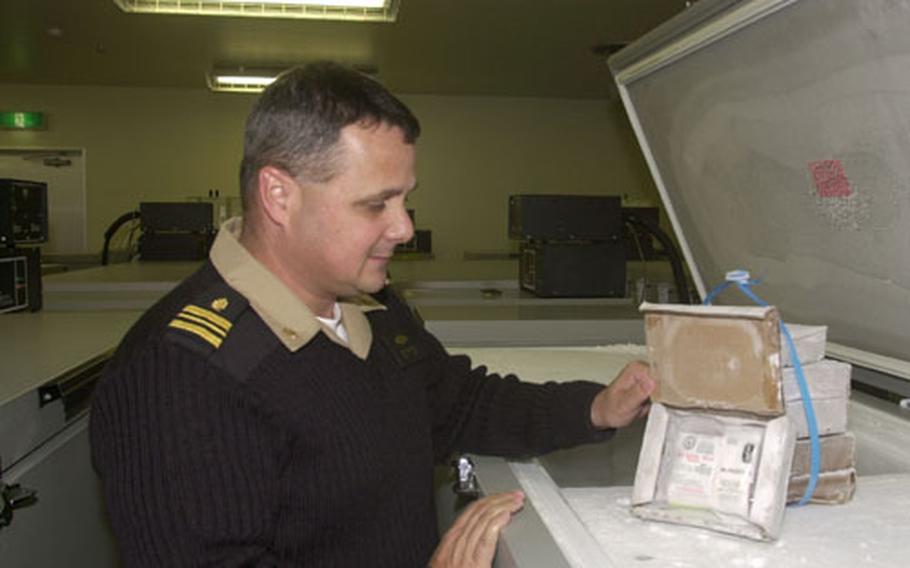 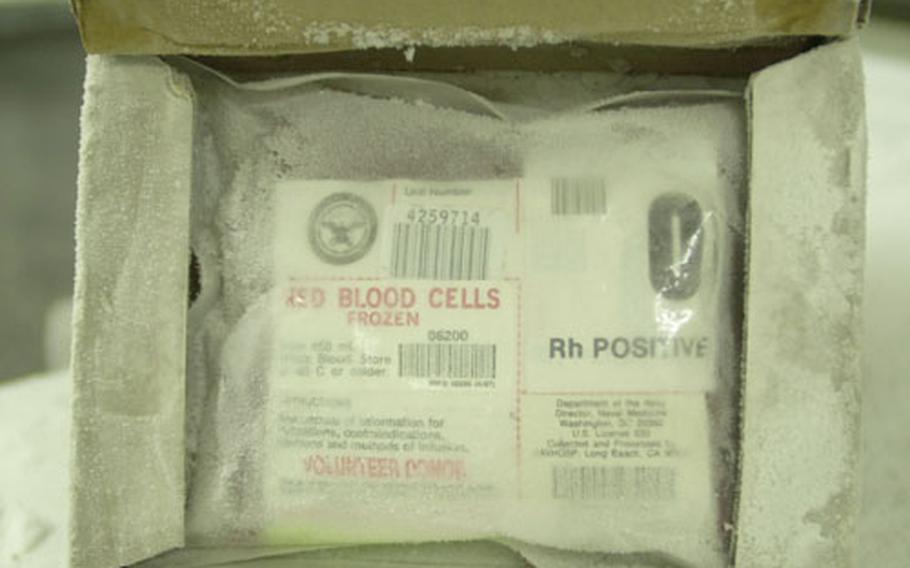 Frozen blood can be stored for up to ten years for wartime supplies, but fresh blood supplies are low even as the blood center on Okinawa ships blood stocks to deploying units and ships. (Mark Oliva / S&S)

Donations typically slump during the holiday and summer vacation periods, Van Patten said, but the need for blood usually increases. &#8220;It happens in the States, and it happens here,&#8221; he said. &#8220;Unfortunately, as with the U.S., people get hurt during the holidays. Those are the times we need to maintain a good inventory.&#8221;

Van Patten said the blood bank here is below its goal of donated blood. Even with scheduled drives, he said it&#8217;s likely the blood stocks will still be only 60 percent or 70 percent of what&#8217;s needed.

The need is growing more critical as troops gear up and deploy for a possible war with Iraq. Blood collected at U.S. bases in the western Pacific is being sent to the Central Command area, Van Patten said. It&#8217;s already been sent to Diego Garcia and is being stocked on U.S. Navy ships as they transit through the area from the United States.

More than 7,000 Marines from Camp Pendleton, Calif., are boarding vessels for deployment over the next few days, and Van Patten expects to supply them with blood. If the USNS Mercy, a hospital ship based in San Diego, gets orders to sail, blood collected across Far East bases will be sent to replenish stocks.

The blood center here also maintains stocks of frozen blood. Dozens of freezers keep blood for 10 years at -80 degrees Fahrenheit. Frozen blood must be used within 24 hours of being defrosted; fresh, refrigerated blood is good for 42 days.

With increased supplies going to deploying troops, Van Patten is stepping up drives. He&#8217;s doubled the number of local drives here, and even employs fly-away teams that have collected blood from Misawa and Yokota air bases. Still, the number of donors giving blood isn&#8217;t matching the need.

It&#8217;s such an important issue, each service has issued directives to commanders to make their troops available to donate. Van Patten said one commander at Camp Hansen was offering to let his Marines off duty early if they donated blood.

&#8220;There is some additional urgency&#8221; about the need to replenish supplies under the prospect of war, said Army Col. G. Michael Fitzpatrick, director of the Armed Services Blood Program Office.

He told ABC News that during the Persian Gulf War, the U.S. military sent 100,000 units of blood to the Middle East, about 20 percent of those coming from civilian sources because the U.S. military couldn&#8217;t keep up with the need. This time around, he&#8217;s asking both military and civilians to be ready to give again, just in case.