As U.S. troops scale back, Iraqi National Police stepping up role as a viable security force 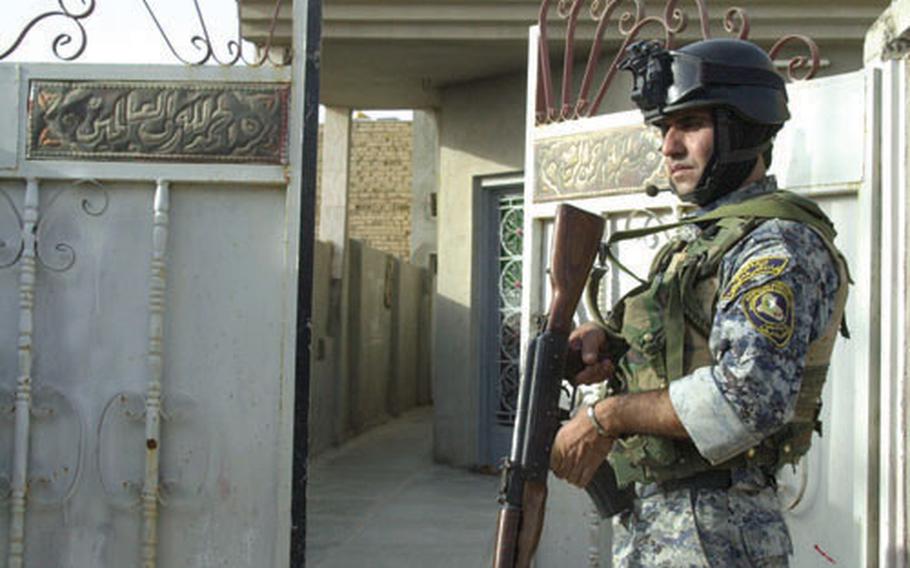 U.S. commanders say that the National Police, such as this officer, are more like Iraqi Army units than the local cops, who are seen as a weaker force because they must deal with their own neighborhoods and are subject to threats and coercion. (Teri Weaver / S&S)

U.S. commanders say that the National Police, such as this officer, are more like Iraqi Army units than the local cops, who are seen as a weaker force because they must deal with their own neighborhoods and are subject to threats and coercion. (Teri Weaver / S&S) 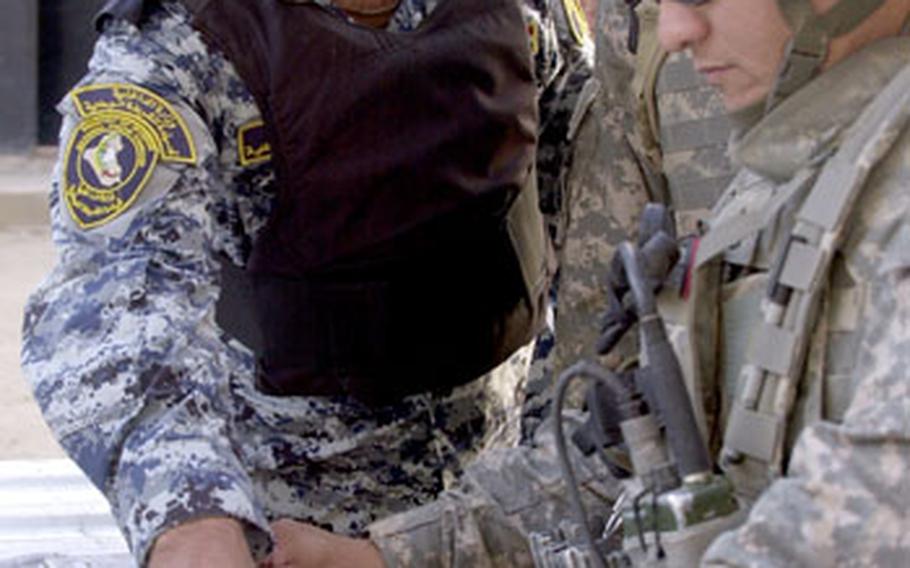 Before the mission, Maj. Balasem with the 2nd Brigade, 1st Iraqi National Police Division, tells Staff Sgt. Jaime Ibarra where he wants to patrol and where he wants to use the dog. Ibarra is a member of Troop B, 1st Squadron, 7th Cavalry Regiment. (Teri Weaver / S&S)

It showed Hussainiyah, a town of 500,000 about north of Baghdad. The commander, Maj. Balasem from the 2nd Brigade, 1st National Police Division, already had planned to search the city&#8217;s northern rim the next morning for caches of weapons.

What he wanted from the Americans were better maps, some helicopters and a dog.

This is how it&#8217;s going to work in the coming months, U.S. commanders say: The Iraqis will plan the raids and missions. The Americans will supplement them with air support and bomb-sniffing canines, among other expensive assets.

As the June 30 deadline nears for scaling back U.S. troops from the cities, American commanders are pushing Iraqi forces to take the lead on security. The trust and success rates between U.S. and Iraqi units still vary widely throughout the country.

In Istaqlil, the American soldiers and National Police have forged a comfortable working relationship that seems to work. In the past four months, the partnership has bolstered the Iraqis military abilities while helping the Americans catch some of the terrorists who have tried to kill them in recent weeks.

The squadron&#8217;s commander, Lt. Col. Charlie Costanza, arrived in late February. He quickly took the lock off the gate that separated the Iraqi and U.S. sides on their shared base, Joint Security Station Istaqlil.

Now, when National Police troops are over for training or meetings, they are invited to stay and eat. When other units drive to the base, the Americans put fuel in their cars. Costanza still posts guards at the gate, but National Police officers come on base in the day and the evening routinely, without formal invitations.

That night, Balasem went to the headquarters office for Troop B, the soldiers who would accompany him the next day. He laid out maps Manglicmot made for him and talked through the operation.

The goal was to search houses and empty lots on the north part of the city, through a cemetery further north, and into some less densely populated farmlands out from town. Manglicmot wasn&#8217;t sure exactly why Balasem picked that area; the American captain didn&#8217;t think the Iraqi officer had a specific target in mind.

But Manglicmot wasn&#8217;t going to argue. A search at daybreak, with a bomb-sniffing dog, some helicopters in the air for protection and a small U.S. unit on the ground were all reasonable requests.

Hussainiyah remains a dangerous place. In the past month, three EFPs in the city have hit the squadron, wounding two soldiers seriously. The squadron found eight roadside bombs before they exploded. In the past two weeks, because of a good local tip, they figured out the structure of a local terrorist cell and arrested some of its top leaders, Manglicmot said.

Parts of the city also remain corrupt. Last week, the Iraqi police commander for all of Istaqlil sat in his office and told his top commanders that their ranks are full of criminals. One day last week, he arrested two of his own police officers.

"Can you believe we work in the middle of the criminals?" the police chief asked Manglicmot.

The Iraqi police are separate from the National Police. As local cops, the police often are too scared to arrest or give information about a suspected criminal because the police officers&#8217; families live in the same town, U.S. officers say. National Police and Iraqi Army are federal forces, and their leaders place them in areas away from their hometowns to prevent similar coercion or threats.

Costanza says the National Police he&#8217;s working with are more comparable to Iraqi army units. Their main problem, like elsewhere throughout the Iraqi security forces, is their supply chain.

That&#8217;s why Costanza shares fuel with the units in the National Police brigade. Without that help, the police would be hard-pressed to travel as much as they do, other members of the squadron say.

On Tuesday, the Iraqis and the Americans showed up at the agreed-upon meeting place on time, right at daybreak. The raid began at 6 a.m., a slow walk along homes surrounded by trash and open sewage. The National Police knocked on doors and woke people up. The Americans watched. One man wanted to see if an American could help his family by shooting a snake that had been living in the ceiling. The soldier shook his head, no.

Air Force Tech. Sgt. Robert Weigold, a member of the 732nd Expeditionary Security Forces at Ramstein Air Base, let his dog, Sonja, sniff at will. After about 30 minutes, a National Police member called for the dog. He was standing outside an abandoned bakery. The police had a tip that the old ovens were used for weapons storage. He wanted the dog to crawl inside.

Sonja sniffed, but she found nothing. In the end, the police took a few guns from some residents. It&#8217;s illegal to have a gun or ammunition in Hussainiyah, unlike in other cities in Iraq.

Finally, at about 7 a.m., the Americans had to call it quits. They had a truck with a bad radiator. Sonja had cut her paw. As they drove back to base, the Iraqi National Police were still going door to door.