An Iraqi policeman stands guard last month in Kirkuk city. While police are plentiful in Kirkuk province&#39;s northern areas, the south is noticeably absent of police stations, making it prime territory for insurgents, according to U.S. commanders. (Geoff Ziezulewicz / S&S)

An Iraqi policeman stands guard last month in Kirkuk city. While police are plentiful in Kirkuk province&#39;s northern areas, the south is noticeably absent of police stations, making it prime territory for insurgents, according to U.S. commanders. (Geoff Ziezulewicz / S&S) Soldiers with the 4th Squadron, 9th Cavalry Regiment prepare to go on patrol at FOB Warrior in Kirkuk. While the northern, predominantly Kurdish parts of the province are mainly focused on reconstruction and civil affairs missions, the Arab-dominated south is a launch point for insurgents throughout the region. (Geoff Ziezulewicz / S&S) 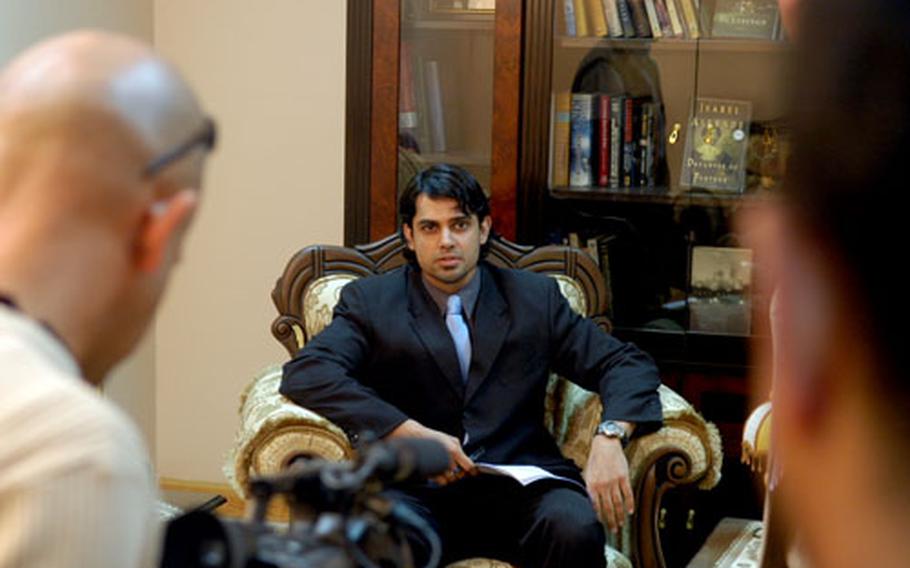 Sri Kulkarni, a U.S. State Department official with Kirkuk&#39;s Provincial Reconstruction Team, prepares to broadcast a message for a local Kurdish television station in Kirkuk city. Much of the U.S. effort around the provincial capital involves infrastructure and civil projects. (Geoff Ziezulewicz / S&S) 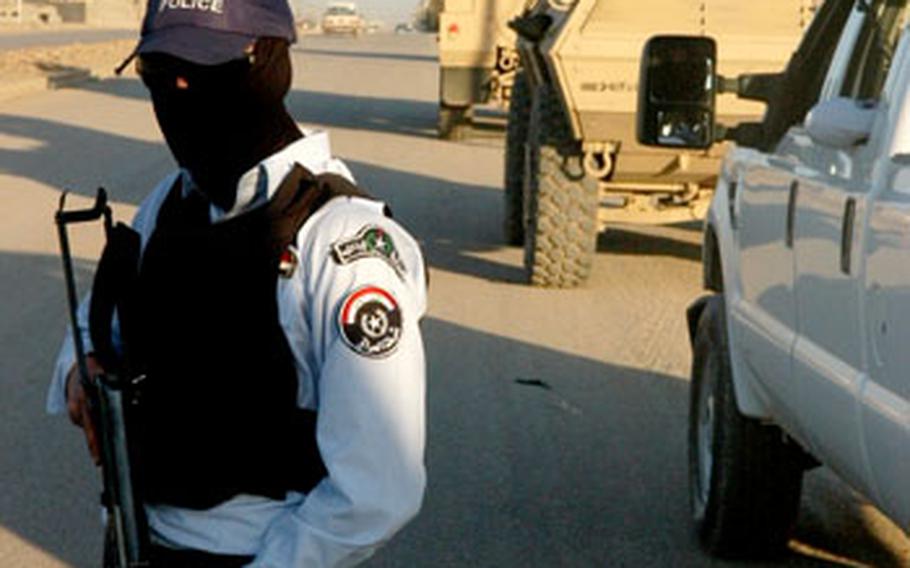 That&#8217;s how Abu Ahmed, a Kurdish father of six, envisions the future in this ethnically diverse northern province after U.S. troops are gone and allegiances older than Iraq&#8217;s new government take hold.

He said this with no drama, and some regret. Ahmed said he sometimes gathers with his Arab and Turkmen friends to reminisce about good times in the past.

"We went out together, smoked together, drank together," he said.

But how ethnic tensions here will influence this oil-rich province&#8217;s future is now on the minds of many.

There&#8217;s the oft-delayed referendum on the province&#8217;s future status as a semi-autonomous region, or one tied to the Kurdish Regional Government to the north, or Baghdad to the south.

There&#8217;s the scheduling of elections and power-sharing agreements between the different Kurdish, Arab, Christian and Turkmen populaces.

And attached to all that is the question of just who should be counted as a provincial resident in the wake of an influx of Kurds after 2003.

The new 12th Iraqi Army Division &#8212; commanded by a general who took part in Saddam Hussein&#8217;s anti-Kurdish campaigns here in the 1980s &#8212; is now positioned just miles from the Kurdish Regional Government&#8217;s Peshmerga army, and there&#8217;s been some saber rattling as the Iraqi army works to assert its authority in the name of Baghdad.

Throw in still-raw feelings from the Saddam regime, and cooperation seems as distant as the burning oil fields seen at night from Forward Operating Base Warrior, home since February to the 1st U.S. Cavalry Division&#8217;s 2nd Brigade.

That&#8217;s another issue. There is still no law in place to deal with profits from the massive oil reserves in and around Kirkuk, roughly 4 percent of the world&#8217;s supply.

Despite the mutual mistrust between some Arabs and Kurds, both sides agree on one point: A U.S. withdrawal would be disastrous for all involved.

For now, 2nd Brigade officials said there is no order for the unit to change its operations in Kirkuk city this year, despite the security agreement that went into effect Jan. 1 mandating a withdrawal of U.S. forces from major Iraqi cities.

Earlier this year, Iraqi Prime Minister Nouri al-Maliki said he would like U.S. forces to stay in certain cities.

"I do not want any withdrawals except in areas considered 100 percent secure and under control," al-Maliki told The Associated Press. "Any area where there is a likelihood of a resumption of attacks, withdrawals from there will be postponed."

The 2nd Brigade&#8217;s arrival in February signaled an increased U.S. focus on the region as violence in other parts of Iraq abated. The brigade replaced a battalion and headquarters unit at FOB Warrior.

U.S. troops walk an ethnic tightrope here, striving to remain neutral in the eyes of the locals. The brigade recently declined an invitation to celebrate the Kurdish new year because of the perception of favoritism it may have created.

Friendliness toward soldiers varies on Kirkuk&#8217;s streets, depending on who may be watching. On a recent patrol, a platoon from the brigade&#8217;s 3rd Battalion, 82nd Field Artillery Regiment stopped in the city to get something to eat.

The first stop was an Arab restaurant where the owner refused to serve the Americans because of fears of insurgent retribution, according to translators. The troops then drove to a Turkmen neighborhood where they were able to buy dinner.

Sunni Arab insurgents, often tied to the Baath Party leaders of Saddam&#8217;s day, use the southern province as a staging ground for attacks here, south to Diyala and north to Mosul, military officialssaid.

Lt. Col. Andy Shoffner, commander of the 4th Squadron, 9th U.S. Cavalry Regiment soldiers who oversee much of the southern province, says there aren&#8217;t enough U.S. or Iraqi forces there to adequately fight the insurgent threat.

While the Peshmerga and the Iraqi army are just miles apart at times, the brigade works more extensively with the Iraqi army&#8217;s 12th Division.

"We partner with the [Iraqi army]," Shoffner said. "We liaise with the Peshmerga."

Sheik Abdullah Sami al-Assi and Mahmoud Mohammed Najid are both members of Kirkuk&#8217;s provincial council and have offices in the same government building in downtown Kirkuk. Al-Assi, an Arab, and Najid, a Kurd, both begin interviews saying unity among Kirkuk&#8217;s people is essential.

Al-Assi said he is a former Iraqi army officer and his family lived in Kirkuk since the 19th century.

He said Arabs don&#8217;t have problems with Kurds, but that Kurdish aspirations threaten the province&#8217;s population as a whole.

"Without solving the problem of Kirkuk, we don&#8217;t want the coalition forces to leave," he said through a translator. "We believe they are maintaining the balance and are not letting any part violate another part."

Turkmen and Arab groups would be marginalized if Kirkuk became a part of Kurdistan, he said.

Kirkuk as Kurdistan is untenable, he said.

"If that happens it&#8217;s a loss for the entire Iraq," al-Assi said. "Whoever wins the war is a loser. The language of forces and armies is useless now."

Just down the hall sits Najid, a former Peshmerga soldier and Kirkuk city native. Najid said he fled Kirkuk in the 1980s, moving to Germany and returning after the invasion. He bristles at suggestions that he and other Kurds who returned here did so purely for political reasons.

"The Arabs who are claiming that in the next room, let them come to this room and tell me I&#8217;m not Kirkuk," said Najid, who has a framed picture of President George W. Bush and Kurdish President Masoud Barzani on his wall.

"Saddam destroyed all of them," Najid said. "They were not kangaroos. They were people."

Ethnic minorities, especially Arabs, have nothing to fear from a Kurdish-led government here, he said.

"The Arabs in Baghdad, for 1,500 years, the government was Sunni Arab," he said. "The Shia in five years erased all that. They erased more than 1,000 years and now they control Baghdad. We didn&#8217;t do that in Kirkuk."

Both al-Assi and Najid said outside states are at play in the region as well, stoking animosities from Turkey, Syria and Iran.

When asked why the political parties can&#8217;t put these differences aside if Kirkuk residents can live side-by-side, Najid told the story of a hunter and his dog who are chasing a rabbit.