As U.S.-Italy game time draws near, taunting increases at Aviano 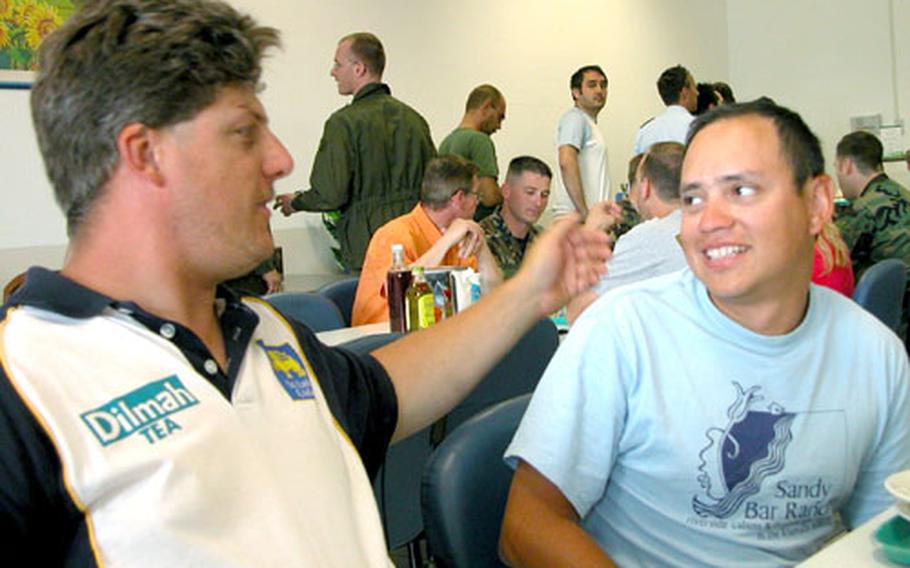 Native Italian Gianni Stivella, right, an employee at Aviano Air Base, said he will root for the U.S. in Saturday’s Italy-U.S. World Cup game because Italy always wins and he used to live in America. This came as shocking news to Massimo Ettari, his friend and fellow employee at the base. (Geoff Ziezulewicz / S&S)

AVIANO, Italy &#8212; At Aviano Air Base, relations between the Italian employees and the American tenants is generally congenial. Everyone mingles and works together throughout the Italian-owned flight line.

But within some social circles on base, the ribbing has begun over who will win the big World Cup match between Italy and the United States on Saturday, though most people interviewed said it has thus far remained civil.

Nevio Artich, a local who is a supervisor at the base exchange, said he will have Italian and American friends over to watch the game. A little trash talking is part of the fun, he said, but it doesn&#8217;t get out of hand.

As of late Friday, American Forces Network secured the rights to show the World Cup matches. The game also will be televised at 9 p.m. at La Bella Vista Club on base.

Grace Viel, an Italian base exchange employee, said there have been friendly arguments between Italian and American fans, &#8220;but it&#8217;s not something that bothers us.&#8221;

Most Italians and Americans interviewed Friday said the U.S. doesn&#8217;t stand a chance against the Italians.

The American team got thoroughly spanked by the Czech Republic earlier this week, 3-0, while Italy made short work of Ghana by a score of 2-0 in their first match on Monday.

The Italians just have more experience, and the Italian league that the players play in, when not competing on the global stage, is better than Major League Soccer, the American equivalent, said Alexander Flack, an Italian-American who lives near Aviano.

America must be able to strongly counter Italy&#8217;s offense and break the Italians&#8217; rhythm if they want to win, said Gianni Stivella, an Italian who said he has lived in the States and is rooting for the American team.

Even though their team is expected to dominate, some Italians were benevolent, modest and gracious when asked about the likelihood of a victory over America.