As U.S. families exit Germany, many pets are left behind 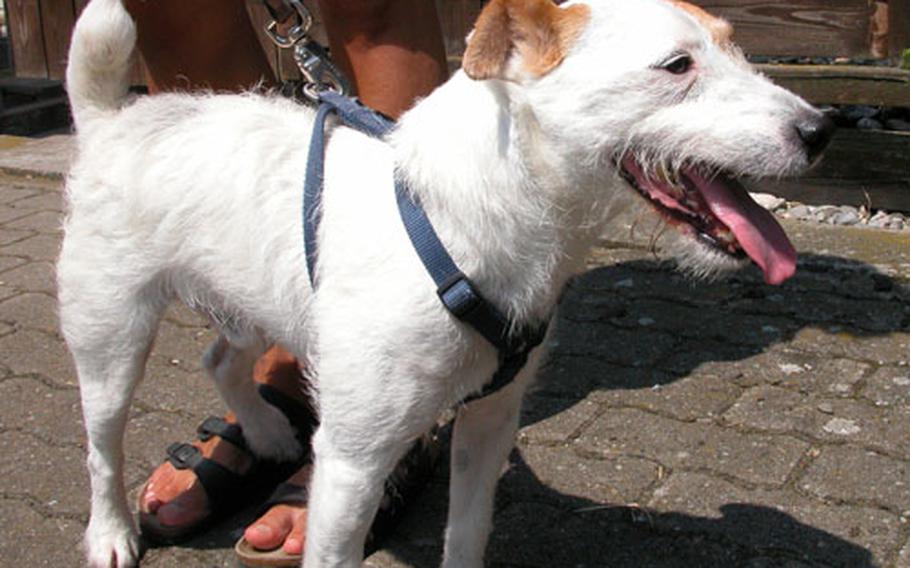 Bogey, who was left behind by a moving Army owner, has been living at the Kitzingen, Germany, animal shelter, known as a Tierheim, for about two months. (Geoff Ziezulewicz / S&S)

Bogey, who was left behind by a moving Army owner, has been living at the Kitzingen, Germany, animal shelter, known as a Tierheim, for about two months. (Geoff Ziezulewicz / S&S) 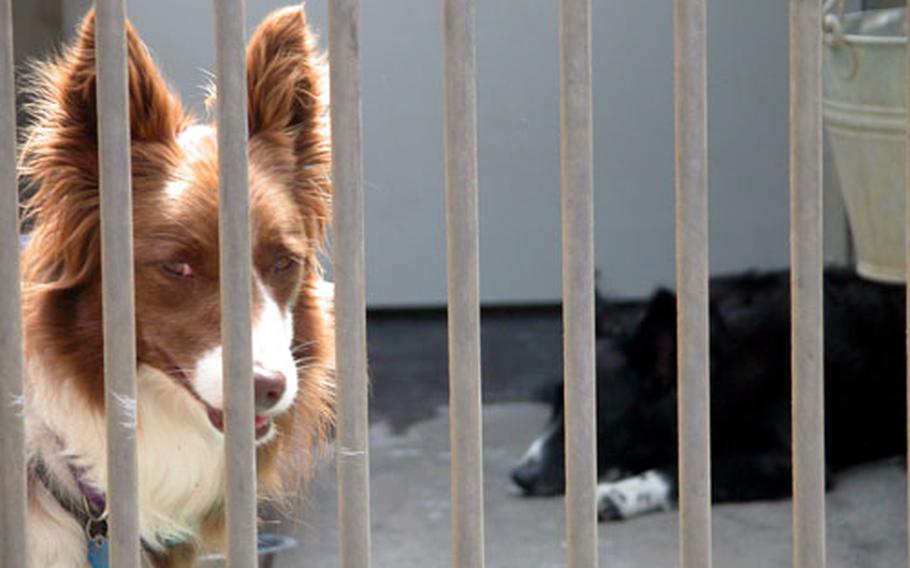 Bridget, left, and Boomer, were dropped off by their American owner at the Würzburg animal shelther in February. The owner was in the Army and did not take the dogs to the next assignment. Since then, the energetic four-year-olds have had a difficult time finding a home. Tierheim manager Sue Zeller attributes that to their energy levels and need for activity. (Geoff Ziezulewicz / S&S)

So when the German manager of the W&#252;rzburg animal shelter, known as a Tierheim, heard about how a Schweinfurt-based soldier had abandoned a spitz-Pomeranian, she felt she had to adopt it.

&#8220;First the dog was thrown out the window and, after this, the kennel,&#8221; Zeller said, adding that the owner was not apprehended.

Even as thousands of soldiers and their families leave the Franconia region of Germany this year as part of the Army&#8217;s drawdown, the dogs of war remain. So do the cats of war. And a few guinea pigs and rabbits of war.

And while most stories of Americans leaving their pets behind are not as dramatic as how Zeller came to own a little American dog, enough pets have been left behind to strain the resources of Tierheims in W&#252;rzburg and Kitzingen, cities with dwindling Army communities where soldiers and families are heading back to the States en masse and bases are being emptied in anticipation of a handover to the Germans later this year.

It&#8217;s not clear exactly what caused all these furry family members to be left behind, but cost or the added burden of setting up a pet shipment are mentioned as possible reasons.

Some airlines charge by the weight of the animal, while others charge by the size of the animal&#8217;s kennel. United Airlines, for example, would charge $127 for a small kennel to be sent from Frankfurt to Kansas. A large kennel would cost $442 for the same trip.

Unlike many animal shelters in the States, German law prohibits homeless pets from being put to sleep, so the animals sit at the Tierheim until a home is found for them.

So far this year, about 40 percent of the 51 dogs the Kitzingen Tierheim received were from Americans, Drabant said. For all of last year, American dog drop-offs constituted only about 11 percent. The percentage of American cats and other pets making a temporary home at the Tierheim is also up, she said.

The W&#252;rzburg Tierheim also has seen a tight squeeze in terms of space and money. The shelter has received about 10 dogs from Americans since May, Zeller said. Usually, they receive about one American dog a month.

Compounding the problem, active-duty soldiers are not allowed to adopt from the Tierheims because of their transient status and concerns that they&#8217;ll just bring them back at the end of their tour.

Housing American pets while their owners were on vacation was also an income source that has dried up with the American departures, Drabant said. Americans constituted about one-half of the business for housing pets whose owners were temporarily away.

Tierheims receive small percentages of their operating budget from area cities and villages, and rely on adoption fees and other cash-flow sources to stay in the black. Soldiers still in the area have been donating food to the Tierheims, and that has helped a lot, Zeller said. One soldier donated more than 500 pounds of pet food and supplies to the W&#252;rzburg shelter, and donation boxes for the Tierheims sit at the post exchange on W&#252;rzburg&#8217;s Leighton Barracks.

To try and counter the abandonment concerns, garrison commander Col. Russel Santala urged pet owners in a May issue of the garrison newspaper to do the &#8220;right thing&#8221; and give their pets to the Tierheims.

Unwanted pets need to be taken care of in a humane way, Williams said.