As truckers strike, Naples runs out of gas 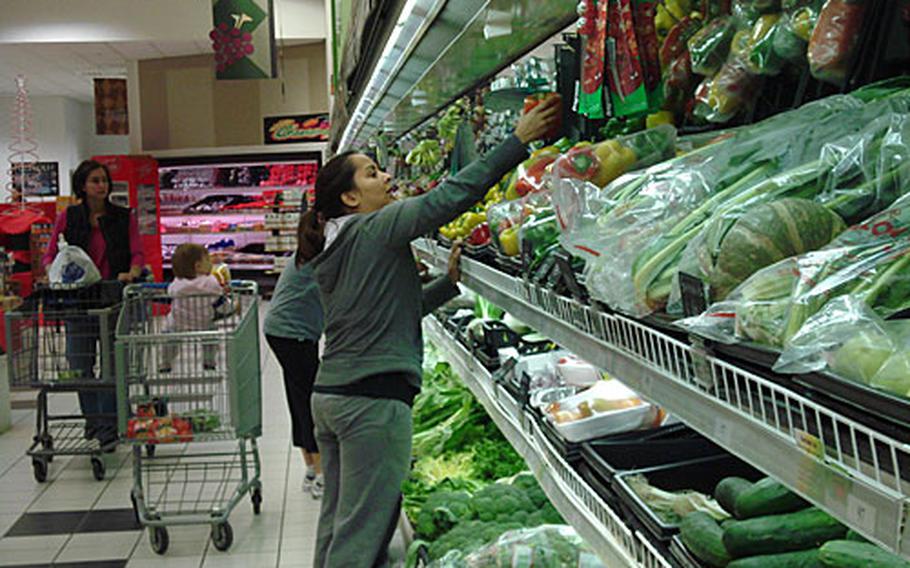 Fresh fruits and vegetables still could be found Wednesday at the base Commissary at the support site in Gricignano, Italy. The commissary was well stocked, in spite of the strike by Italian truckers, who walked off the job as of midnight Monday and have not delivered goods or fuel throughout the country. (Sandra Jontz / S&S)

Fresh fruits and vegetables still could be found Wednesday at the base Commissary at the support site in Gricignano, Italy. The commissary was well stocked, in spite of the strike by Italian truckers, who walked off the job as of midnight Monday and have not delivered goods or fuel throughout the country. (Sandra Jontz / S&S) Striking truck drivers stop traffic along the highway SP1 toward Villaricca, a makeshift "checkpoint" where they slow traffic in order to ensure other truckers aren&#39;t breaking the strike. Media reports have stated that non-participating truckers have had rocks thrown at them or vehicle tires slashed. (Sandra Jontz / S&S) 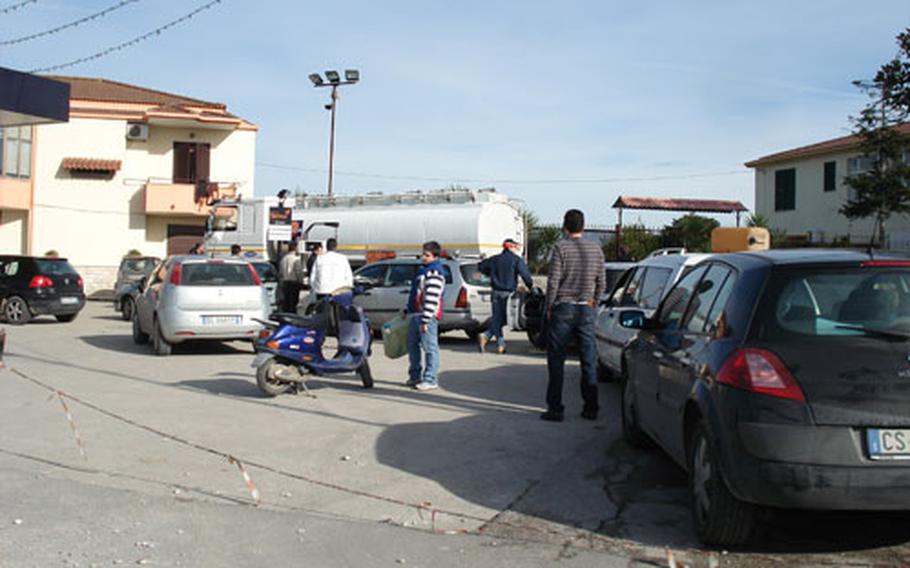 Motorists begin to line up Wednesday in front of a Repsol gas station in Villa Literno after a fuel truck pulled in and began to unload what now is a very precious commodity in Italy -- fuel. (Sandra Jontz / S&S)

The strike by Italian truck drivers that started at midnight Monday plunged Italy into a tailspin Wednesday.

But there is hope.

The trucking union and government came to a resolution late Wednesday that meant an end to the disabling strikes, according to the AGI news agency.

The union representatives issued a combined statement saying the government has met some of the union&#8217;s requests, such as an obligatory written worker&#8217;s contract, minimum tariffs, and an oversight of costs of fuel, the agency reported.

Government officials were hopeful that normalcy would return within hours of the called off strike.

&#8220;In the end, a sense of responsibility prevailed,&#8221; Transportation Minister Alessandro Bianchi said.

Most fuel stations have run dry and many people can&#8217;t get to work; striking truckers who at first only blocked traffic resorted in some places to slashing tires. Italian police were providing armed escorts for fuel trucks to designated pumping stations reserved to fuel up public transport vehicles, such as buses, police cars and ambulances.

Before word of the strike&#8217;s end in Naples, officials closed the base elementary and high schools Thursday and Friday because so many people are running on empty, &#8220;and we&#8217;re trying to keep things as easy as possible,&#8221; said Lt. Cmdr. Wendy Snyder, spokeswoman for Navy Region Europe. &#8220;With delays in transportation, difficulty getting to and from work and school, no fuel, we wanted to keep things easy.&#8221;

Schools in Vicenza, Aviano and Sigonella will remain open.

Following an emergency meeting Wednesday among base department heads, Naval Support Activity Naples will be at &#8220;minimum manning&#8221; for the next two days, meaning only mission-essential personnel need to report to work.

Since there are no gas stations on military bases in Italy for personal use by U.S. and NATO members and their families, motorists must fill up on the economy &#8212; where pumps are running dry.

Tuesday night, the Italian government tried to intervene by ordering the strikers back to work by 11:59 that night. But truckers met that order with defiance, and strikers again Wednesday held steadfast in their protests of the high cost of fuel.

Tuesday afternoon, two Navy postal clerks returning to the base in Naples from Gaeta were stopped by striking truckers along the SS7 highway. Some truckers are staging &#8220;checkpoints&#8221; along major thoroughfares to make sure other truckers aren&#8217;t breaking the strike. When they noticed the sailors&#8217; van was carting mail, the truckers slashed one of the van&#8217;s tires, said Senior Chief Petty Officer Edgardo Rodriguez, senior enlisted adviser/postal officer in Naples.

The sailors were uninjured.

Effects of the strikeBefore the announced end to the strike, base postal officials had stopped transporting packages between the bases of Gricignano support site and Allied Joint Force Command in Bagnoli to the Capodichino base, where U.S. mail is loaded on planes bound for Rome and then on to New York or New Jersey, Rodriguez said.

Customers who need to have packages mailed this week should take them directly to the Capodichino post office, officials said.

Lt. Cmdr. Les Engle said he watched Tuesday afternoon as an angry mob of truckers screamed at a small flower-delivery truck and banged on the windows and sides of the truck to get the driver to stop. The incident also took place along the SS7 &#8212; a highway that connects the Capodichino base with the support site. When the flower truck failed to stop, one of the protesters smashed the passenger window.

Ferrau, chief of public affairs for the 31st Fighter Wing at Aviano, said the base sent out a message informing servicemembers of the fuel situation Tuesday morning.

Dozens of servicemembers heeded the warning and were lined up at two gasoline stations near the main gates Wednesday morning.

Angelo Posocco, who runs one of the stations, said he ran out of regular unleaded, so he was distributing premium unleaded while it lasted. Asked how much he had left, he looked back at the line of cars waiting to fill up and said, &#8220;Today, it&#8217;s finished.&#8221;

Government vehicles can fill up at on-base pumps, though the commander of the 31st Logistics Readiness Squadron in Aviano has told people not to top off their tanks. In Naples, there is plenty of fuel in reserve for security, fire and ambulances, Snyder said.

Store well-stockedThere&#8217;s no shortage of groceries on the shelves of the Naples commissary, though Wednesday they were out of skim milk and organic eggs.

Inventory at the base hospital in Naples is also not affected, said spokesman Jimmy Hodges.

Lt. Col. David Konop, a spokesman for the Army and Air Force Exchange Service in Germany, said trucks traveling to U.S. bases in northern Italy have faced some delays, but &#8220;our shipments have gotten through. At this point, [the strike] hasn&#8217;t really impacted us.&#8221;

Still, some were feeling the strike&#8217;s secondary effects.

Petty Officer 3rd Class Frank Spencer is supposed to leave the country in a week and a delivery truck is supposed to be available so he can pack up some of his home furnishing this week.