As the need for child care centers grows, base officials wonder who will staff them Erin Becote, a teacher in the preschool room at Yokosuka Naval Base&#39;s Child Development Center, talks with children as they play in the center&#39;s sandbox. (David J. Carter / S&S)

Erin Becote, a teacher in the preschool room at Yokosuka Naval Base&#39;s Child Development Center, talks with children as they play in the center&#39;s sandbox. (David J. Carter / S&S) 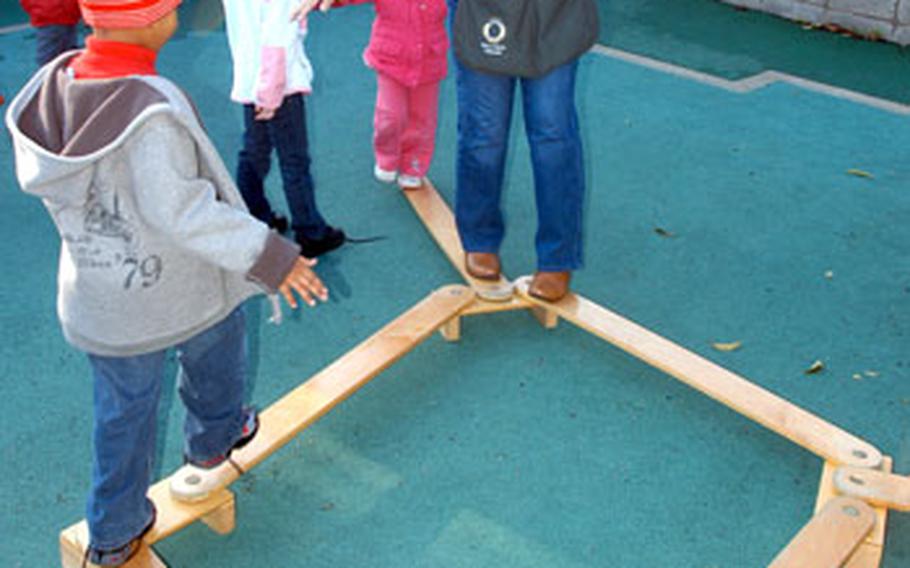 MISAWA AIR BASE, Japan &#8212; Faced with a staffing crisis that threatened their ability to care for the community&#8217;s children, Misawa officials came up with a unique plan earlier this year: They put U.S. military personnel to work in the Child and Youth Services program.

The situation is not exclusive to Misawa. Nearly every overseas U.S. military base reported staffing shortages when queried in recent weeks. And many are scrambling to find ways to hire and keep employees.

Kelly B. Hruska, deputy director for government relations with the National Military Family Association, said there is a tremendous need for child care in the U.S. military community.

She said a little more than half of the 1.1 million children of military families identified in a 2007 census were 7 or younger.

Hruska said the Defense Department has long realized the need for top-notch child care, especially in overseas locations, and is still investing the money to build the centers.

The problem, she said, is the staffing.

Misawa officials said the decision to take 11 servicemembers out of their daily jobs and reassign them temporarily to work with the children beginning in September was easy because the base was &#8220;out of options.&#8221;

&#8220;We were not going to have sufficient staff to handle even all of our priority one folks,&#8221; he said. Military day care centers prioritize usage, giving single military parents and dual military couples first chance at care.

The troops assigned to work with the children were not in military uniform and underwent the same background check and initial training as every new employee in the CYS program, he said.

It was possible to put them to work because, as a remote assignment, Misawa is authorized to use both appropriated and nonappropriated funding in its child care programs.

As the center has gradually hired more civilians, the servicemembers have been sent back to their squadron, he said, and only a few were still working in early December.

Wiegand said that when he took command in July, he looked around the base and saw how instrumental Japanese employees were in other squadrons. Wiegand said he wanted that in the CYS program.

&#8220;If we could build a cadre of Japanese nationals who are qualified and certified &#8230; it would be a pretty powerful mix to bring to our child care programs here at Misawa,&#8221; he said.

Since Japan wasn&#8217;t going to agree to fund additional positions at Misawa, the base had to pay for them.

CYS officials with the Europe Region Installation Management Command &#8212; which has programs on 17 garrisons in Germany, Italy, Belgium and the Netherlands &#8212; have struggled to keep their centers properly staffed following the heavy deployment schedules in Afghanistan and Iraq.

Since 2004, the command has spent about $1.9 million a year bringing college students to Europe on short-term visas to work in the centers, said Cherri Verschraegen, who heads command&#8217;s program. She said 82 interns &#8212; the most since the program was initiated &#8212; are currently working at Army care centers across Europe.

The &#8220;obvious question&#8221; facing planners, Verschraegen said, is how they&#8217;ll staff the 10 new facilities that are going to be built in Europe, some as part of the restationing of U.S. forces.

She said the first thought is to bring more interns and to increase incentives for full-time employees.

But it&#8217;s still not easy to hire enough employees, she said.

Thompson, who has oversight of the DOD child development and youth programs serving about 400,000 children daily at 300 locations, said that some people think of a job with CYS as a temporary measure instead of a potential career.

While recruiting and retention bonuses can help, Thompson thinks the &#8220;opportunity for professional growth&#8221; also should be stressed. She pointed out that each military base has a CYS program, so a child care job doesn&#8217;t go away because of a transfer to a new duty station.