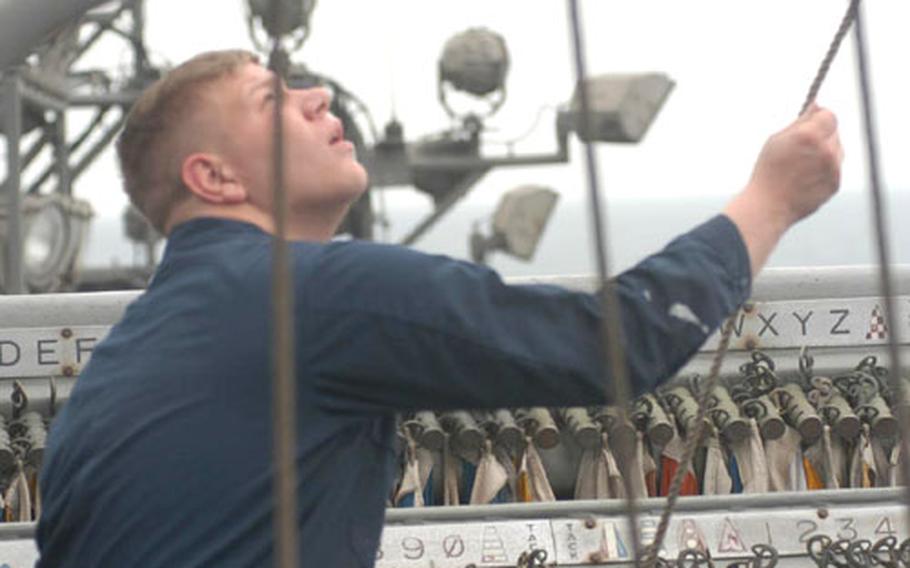 Petty Officer 1st Class Bruce Harrison on the USNS Pecos signals sailors on the USS Kitty Hawk as the two ships are tied up together during an underway fuel replenishment Friday. (Kendra Helmer / S&S) Petty Officer 3rd Class Robert Joseph, a signalman on the USS Kitty Hawk, sends semaphore to a sailor on the USNS Pecos during an underway fuel replenishment in the Persian Gulf on Friday. (Kendra Helmer / S&S) 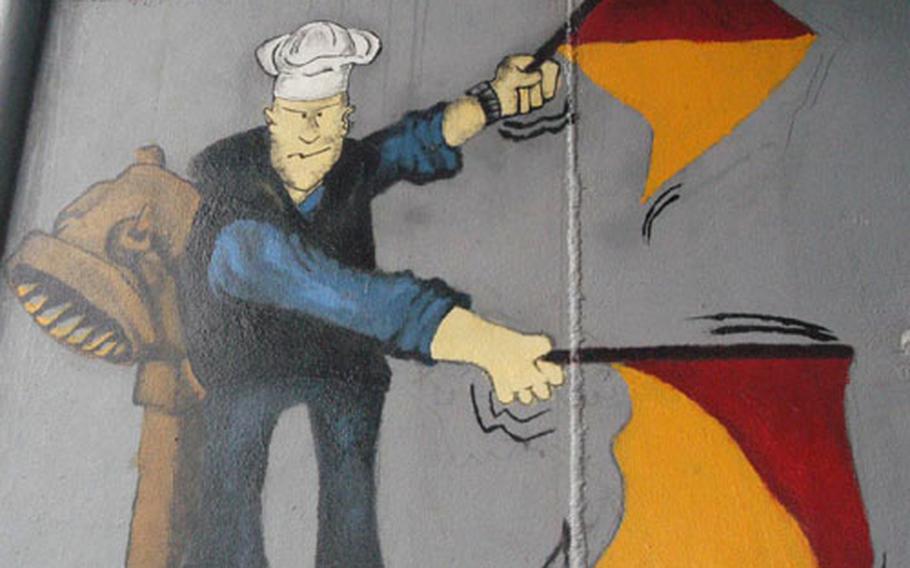 A sign adorns the signal bridge, where signalmen stand when communicating with other ships. (Kendra Helmer / S&S)

ABOARD THE USS KITTY HAWK &#8212; Chief Petty Officer Darren Young talks to sailors on other ships without making a sound.

Moving his arms in precise positions in a language called semaphore, the USS Kitty Hawk sailor communicates with the crew of a nearby vessel that&#8217;s refueling the aircraft carrier.

For years the Navy has talked about merging the jobs of signalmen and quartermasters, the crew members who chart the ship&#8217;s location.

&#8220;I don&#8217;t want it to happen because [the signalmen] will lose proficiency,&#8221; said Young, the leading chief petty officer for the Navigation Department on the Yokosuka, Japan-based carrier, which is now in the Persian Gulf.

While officials haven&#8217;t announced when a merge could happen, Young said signalmen are used less and less often as technology advances.

Young, 37, got into the job 19 years ago. He said it takes about a month to get down the language: For every letter of the alphabet, there&#8217;s a movement.

On Friday, Young exchanged semaphore with a signalman on the USNS Pecos as it tied up to the carrier to refuel it.

He signaled Petty Officer 1st Class Bruce Harrison, telling him to take care of a Kitty Hawk sailor going on temporary duty to the refueler.

Harrison drew laughs from Kitty Hawk sailors hundreds of feet across the water when he posed for a photograph after sending, &#8220;Make sure you get my good side.&#8221;

The carrier&#8217;s 16 signalmen also know Morse code and practice using flashlights for nighttime. They&#8217;re responsible for hoisting flags to indicate 68 situations, from divers working over the side to a request for medical assistance.

He started the job four months ago because he&#8217;s interested in different forms of communication.

Seaman Timothy Soliday said he wishes he were in another job learning skills he could put to use in the civilian world. But at the same time, he&#8217;s protective of the signalman rate.

Except, he admitted, he does use semaphore to talk about them behind their backs.