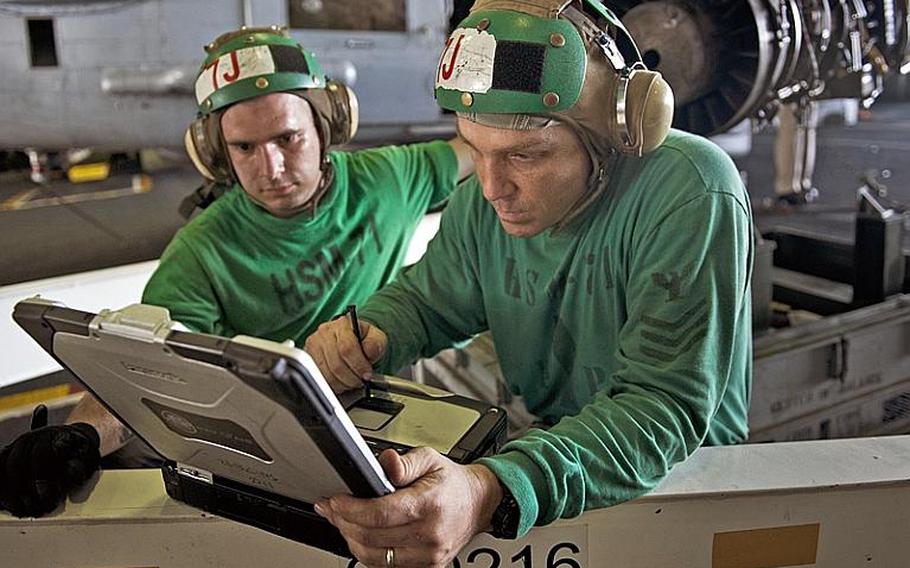 Petty Officer 1st Class Marcus Campagna refers to schematics before installing an engine into an MH-60R Sea Hawk helicopter on the carrier USS John C. Stennis. Ever-changing technology of computer-assisted design programs can wreak havoc with the engineering documents related to the military's vehicles and weapons systems. The documents are constantly merged into the latest CAD software and the conversion process can introduce potentially disastrous inconsistencies. (Benjamin Crossley/U.S. Navy)

Petty Officer 1st Class Marcus Campagna refers to schematics before installing an engine into an MH-60R Sea Hawk helicopter on the carrier USS John C. Stennis. Ever-changing technology of computer-assisted design programs can wreak havoc with the engineering documents related to the military's vehicles and weapons systems. The documents are constantly merged into the latest CAD software and the conversion process can introduce potentially disastrous inconsistencies. (Benjamin Crossley/U.S. Navy) 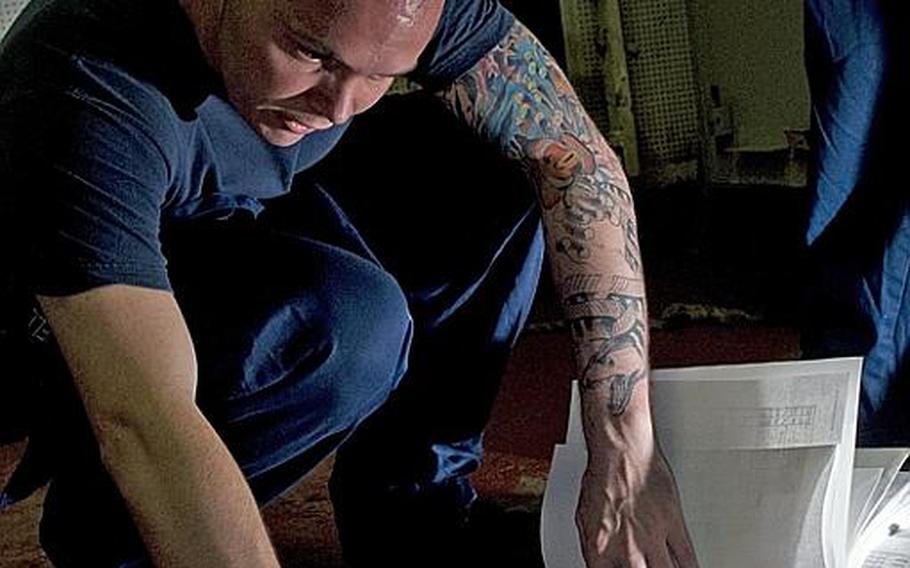 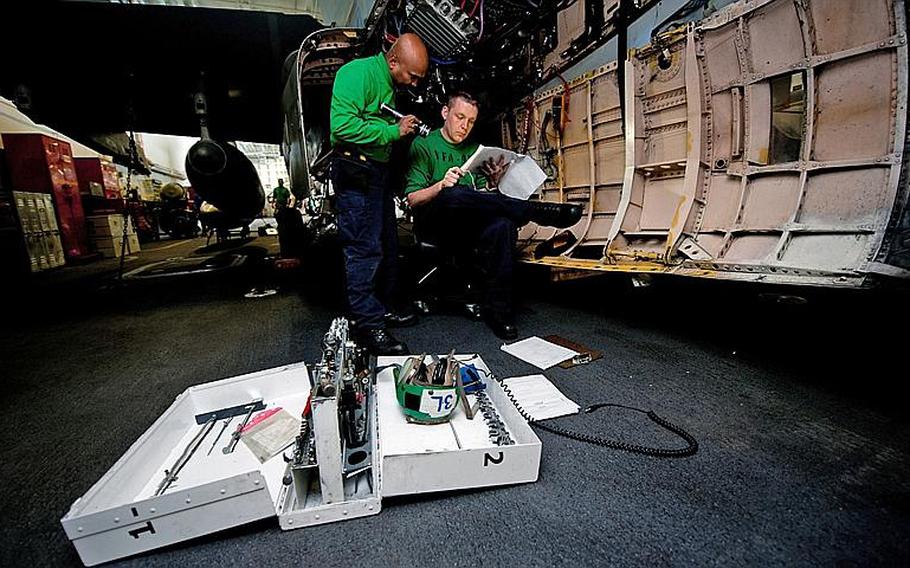 Petty Officer 1st Class Selvarajah Srisaba and Petty Officer 1st Class Anthony Winters review schematics for the engine of an F/A-18C Hornet aboard the aircraft carrier USS John C. Stennis. The ever-changing technology of computer-assisted design programs can wreak havoc with the engineering documents related to many of military's vehicles and weapons systems. The documents are constantly merged into the latest CAD software and the conversion process can introduce potentially disastrous inconsistencies. (Kenneth Abbate/U.S. Navy)

WASHINGTON &mdash; Most of us just see a ship.

Ben Kassel, an engineer at the Carderock Naval Surface Warfare Center outside Washington, also sees the chaotic flurry of electronic design data that goes with it.

Kassel is haunted by the realization that some of it is likely to be misplaced, misfiled, garbled with errors or unreadable because it was saved years ago in an obsolete computer program. Nevertheless, any piece of it might be needed at a moment&rsquo;s notice to maintain, repair or upgrade the vessel.

&ldquo;The number one, overriding question is how you get the data you need when you need it,&rdquo; he said. &ldquo;Because it&rsquo;s everywhere, and it&rsquo;s totally out of control.&rdquo;

This isn&rsquo;t just a housekeeping problem in one engineer&rsquo;s office, or at Carderock or for the Navy. Engineers and computer scientists across the Defense Department are struggling to solve, once and for all, the issue of preserving electronic data for the long haul, keeping it accessible when needed and free of potentially disastrous inconsistencies.

The constant need to transfer data on ships, aircraft and other systems into the latest design program opens a window through which errors can creep in. A part might suddenly disappear. Even more dangerous, the position of a weld might shift subtly, something only perceptible when a part fails, potentially catastrophic.

The heart of the problem is the passage of time.

The United States has the world&rsquo;s most advanced military, but many of its weapons and vehicles are practically antiques. Crucial systems &mdash; aircraft carriers, bombers, artillery pieces and more &mdash; were designed decades ago. The engineering documents, including those detailing subsequent modifications, are a bewildering mix of paper and electronic files from different eras.

Because of budget constraints and strategic necessity, systems such as the B-52 &mdash; expected to stay in service for nearly a century &mdash; have incredibly long life spans, said Mark Conrad, an electronic data preservation specialist for the National Archives and Record Administration.

&ldquo;When they built that plane, they designed it with two-dimensional drawings, but over the years, almost everything has been swapped out, and anything in the last 15 years was probably designed using three-dimensional CAD (computer-aided design) models,&rdquo; said Conrad, who is working with DOD experts to resolve the problem.

Old-fashioned blueprints and paper designs are hard to work with, require a skill set possessed by a shrinking number of engineers, and frequently need to be laboriously digitized, said Paul Huang, a materials engineer working on the data preservation problem for the Army Research Laboratory.

With paper drafting practically extinct, new layers of digital complexity emerge with every new system deployed. Each is designed in the latest, greatest CAD program, all of which are just around the corner from obsolescence.

&ldquo;When the Navy deploys a new ship, they expect it to be around for 50 years, but the CAD software used to produce it has a lifespan of about 18 months,&rdquo; Conrad said. &ldquo;Software companies make money by introducing new bells and whistles ... but when you try moving the information from one system to another when you upgrade software, system A&rsquo;s bells and whistles may not be supported by system B.&rdquo;

It&rsquo;s not just annoying; it could be dangerous, he said. Forcing different CAD programs, or even different versions of the same program, to &ldquo;interoperate&rdquo; can introduce errors.

&ldquo;Let&rsquo;s say you&rsquo;re doing welding and your CAD models have changed from one version to another, or you&rsquo;ve gone to a completely different CAD package,&rdquo; he said. &ldquo;How a joint is represented in the new software may be different enough that you will not put down a good weld.&rdquo;

Conrad said he knows of no major accidents from such corrupted data, but in the commercial aviation world, Airbus suffered delays in production of its A380 jet because different units of the company used different versions of the same popular CAD program, resulting in parts that failed to properly mate.

Another expert likened the translation effect between CAD programs to a game of telephone, where a message repeated person-to-person gets confused. But this is more like telephone played among people speaking different languages, said Doug Cheney, senior consultant at ITI TranscenData, a company that specializes in solving CAD interoperability issues.

&ldquo;That can happen all too quickly when you transfer engineering data from one system to the next,&rdquo; Cheney said. &ldquo;There&rsquo;s either data loss or data is interpreted in ways it wasn&rsquo;t originally intended.&rdquo;

Some errors are easy to see to see, even if they require a time-consuming fix. Others may go unnoticed.

&ldquo;If you open a file and a big piece of geometry is not there &mdash; like the brake caliper &mdash; that&rsquo;s an obvious problem you fix,&rdquo; he said. &ldquo;But what&rsquo;s really got people concerned is the subtle problems you don&rsquo;t notice that creep in, and they assume the model data is correct. It&rsquo;s only when you get out of the digital world and into the real world you realize you&rsquo;ve got serious problems.&rdquo;

The solution is complex, because it requires both technical and behavioral changes, experts say.

The basic strategy for preserving data calls for every design, including manufacturing and product support data, to essentially be put in cold storage using a system developed through the International Standards Organization called STEP, or Standard for the Exchange of Product Model Data.

&ldquo;The idea is when you finish your design, you save it in this neutral file format agreed to by international committees, and which doesn&rsquo;t change much over time,&rdquo; Conrad said. &ldquo;You save validation properties with it too, information that lets someone who opens it in the distant future check to make sure everything is correct.&rdquo;

Technicians and engineers around the world are working to adapt STEP to the range of design demands, but it&rsquo;s still being developed in various areas. Ship design is one, Cassel said.

Other devils lie in the details as well.

For one thing, Huang said, program managers &mdash; who could clean up their designs for preservation &mdash; often show little inclination to do so.

&ldquo;They&rsquo;re focused on delivery,&rdquo; he said. &ldquo;They don&rsquo;t really see the value of that digital data set because they are so involved in just getting that weapon platform out [on budget and on time].&rdquo;

That may slowly be changing, however, he said. A DOD-wide group focused on data preservation and CAD interoperability has grown in recent years, and is pushing the idea of including data preservation among the points a manager is graded on.

The DOD Engineering Drawing and Modeling Working Group began meeting in 2008 with a handful of people from various departments to hash out standards for preserving technical data but has grown to around 100 people, Huang said. The Pentagon also increasingly collaborates with other branches of government that face similar digital preservation issues, he said.

Another problem, several experts said, is that many defense contractors are unwilling to hand over a full set of design and manufacturing data to DOD, fearing loss of future business if the government uses the information to hire a competitor to supply replacement parts, for instance.

&ldquo;Defense contractors are naturally concerned about saying, &lsquo;Here&rsquo;s your weapons system, and by the way, here&rsquo;s so much engineering information that you can get a competitor to build Revision 2 much cheaper,&rsquo;&thinsp;&rdquo; he said. &ldquo;But the government is saying it needs enough information to support the acquisition throughout its life, not necessarily to let a competitor do a redesign. At some point, I think everyone will be able to find a middle ground.&rdquo;

While that business wrinkle needs to be worked out, another is that engineers and programmers such as Kassel continue to fiddle with and perfect STEP. But while they labor to expand its capabilities, untold terrabytes of design data continue falling into the vortex of potential obsolescence and data corruption.

&ldquo;We&rsquo;re our own worst enemy in some cases,&rdquo; he said. &ldquo;What we need to do is start implementing.&rdquo;